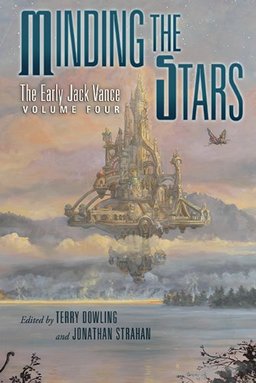 I’ve been heartily enjoying The Early Jack Vance volumes from Subterranean Press, which collect the hard-to-find early pulp SF and fantasy from one of the greatest writers of the genre, Jack Vance.

The first two, Hard Luck Diggings (2010) and Dream Castles (2012), are now sold out and out of print — and rapidly raising in price. They collected fiction from the very start of Vance’s career, the late 40s through the late 60s.

Two more volumes are now in print, with one more due in March. Minding the Stars, the fourth volume, spans the years from 1952 to 1967, collecting four long novellas and four short stories, originally published in Astounding Science Fiction, Future Science Fiction, Fantastic Universe, Amazing Stories, and other fine publications. Here’s the complete table of contents:

The opening story, “Nopalgarth,” was originally published as half of an Ace Double in 1966, under the title The Brains of Earth. Vance collectors may recognize it as one of three novellas published in a slender collection from DAW in September 1980, under the title Nopalgarth (see below).

The novella “Telek” was originally published in the January 1952 issue of Astounding Science Fiction — see below right for the cover of the issue.

Here’s a sample of some of the other pulp magazines and SF digests the stories originally appeared in.

And here’s the book blurb from the flap jacket:

Throughout his long and impressive career as a celebrated professional storyteller, Jack Vance showed a fascination not only with having characters solve mysteries in all sorts of dramatic and wondrous situations using their powers of observation, deduction and common sense, but also with the possibility of higher states of mind in play, other realms of existence, even spirit worlds.

Vance approached such things with a healthy, properly wary, scientific curiosity, even while embracing the liberties allowed any popular entertainer, and so made the exploration of such higher states part of his stock in trade.

Whether richly displayed in his Dying Earth stories with their wizardly spellcasting, eldritch beings and strange dimensions, or in his science fiction tales with the incredible mental powers afforded races like the Green Chasch, the Fwai-chi, the Meks of Etamin 9 besieging the final human strongholds in ‘The Last Castle,’ even given to divergent human peoples on Koryphon, Maske and countless other worlds, or to the likes of his most extraordinary Demon Prince, Howard Alan Treesong, Vance was forever drawn to what else might comprise human (and other) natures in all their myriad forms.

Minding the Stars: The Early Jack Vance Volume 4 reflects this beguiling blend of the practical and the otherworldly, combining tales that explore the workings of such mental powers with other stories selected from the earlier days of the Grandmaster’s illustrious career.

In Vance’s own words:

“Strange things happen. Almost everyone has had some sort of brush with the paranormal, even the most resistant and skeptical of persons. The range of events is wide and only roughly amenable to classification. In olden times angels and demons were held responsible; to date no one has produced a more reasonable explanation. Phenomena such as telepathy and poltergeists may well be manifestations of different and distinct principles; there may be two, three, four, or more such realms of knowledge, each at least as rich and intricate as physics or astronomy. There is little systematic study. Conventional scientists shy away from the field because they are, in fact, conventional; because they fear to compromise their careers; because the subject is difficult to get a grip on; because scientists are as susceptible to awe and eeriness as anyone else. So: the mysteries persist; the lore accumulates, and we know for sure no more than our remote ancestors, if as much.”
—Jack Vance, 1970

Minding the Stars: The Early Jack Vance Volume 4 was published by Subterranean Press on March 31, 2014. It is 367 pages in a deluxe hardcover edition, priced at $45. There is no digital edition. The cover is by Tom Kidd.

Do they say when Vance originally wrote THE BRAINS OF EARTH aka NOPALGARTH? I think it was first published in the mid-60s but it always read to me like a 50s-era piece of Cold War paranoia (like THE PUPPET MASTERS only not as good). So I wondered if it was a trunk novel that Vance finally sold to Ace a decade later.

I think it’s pretty weak, one of Vance’s worst novels. Indeed this particular volume is fairly weak to my taste … perhaps only “Telek” and “The World Between” (and maybe “Alfred’s Ark” which I don’t recall) rank with even pretty good Vance. Not that I’m still not glad to have the book available!

There’s no info on the date NOPALGARTH was originally written, but you could well be right.

And I agree that the book doesn’t have many of Vance’s signature stories, even among his early work. But for Vance fans interested in following his entire career, it’s still a godsend… trying to track down every one of these stories is a massive (and expensive) undertaking, so having them collected in one place is marvelous.

I haven’t read most of the stories yet, but I have to admit that I’m intrigued by the TOC. For one thing, I always thought Vance was strongest at novella length, and there are four very hard-to-find novellas in this book:

Actually I don’t remember “Parapsyche” either. Was that published under a different name?

Definitely a volume worth looking at, even if the stories aren’t Vance at his very best.

Nope… not according to ISFDB, anyway.

Looks like it was reprinted in the British collection THE DARK SIDE OF THE MOON (1986), but not otherwise widely available.

According to the Vance Integral Edition bibliography, Nopalgarth was written 1964.
http://www.integralarchive.org/biblio-3.htm