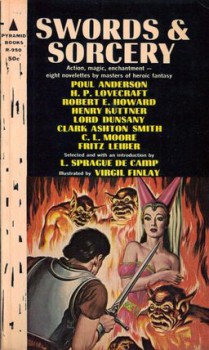 The swords & sorcery that works best for me, the tales that get my heart pounding, come in short story form. It was Robert E. Howard’s “Beyond the Black River”, Fritz Leiber’s “Ill Met in Lankhmar”, and Karl Edward Wagner’s “Reflections for the Winter of My Soul” that made me love this genre. In those stories, the authors distilled everything down to forty or fifty pages of concentrated action, mayhem, and bloodshed. There are no wasted words, no longuers. While all three authors wrote decent enough S&S novels, it’s their short stories that roar down the tracks like a train, pulling me along. S&S is a fiction of action and plot. I want speed; economy of story-telling.

Even in 2015, thirty years after the end of swords & sorcery’s glory days, there are new short stories being written all the time. Each year, several anthologies’-worth of short fiction, once the lifeblood of S&S, still appear in various print and electronic magazines (read my most recent review here).

But you rarely see actual S&S anthologies published anymore. The only recent collections of original stories that spring to mind are the excellent Swords and Dark Magic, edited by Jonathan Strahan and Lou Anders, and Jason M. Waltz’s equally cool Return of the Sword. David Hartwell and Jacob Weisman’s The Sword and Sorcery Anthology is a decent enough collection, though of mostly reprints reaching all the way back to S&S’s earliest days.

But once upon a time anthologies seemed to be coming out of the woodwork. Probably the most well known are Lin Carter’s Flashing Swords! series and Andrew J. Offut’s Swords Against Darkness series. Amanda Salmonson edited two collections about women warriors, called succinctly, Amazons and Amazons II. Robot-like, Marion Zimmer Bradley’s Swords and Sorceress series continued for four years after she died in 1999.

The first time anyone put together a book of purely swords & sorcery stories was in 1963 when L. Sprague De Camp edited a book called simply, Swords & Sorcery. It consists entirely of reprints and most are quite good, several even great. In his introduction he describes how he saw the genre:

“Heroic fantasy” is the name of a class of stories laid, not in the world as it is or was or will be, but as it ought to have been to make a good story. The tales collected under this name are adventure-fantasies, laid in imaginary prehistoric or medieval worlds, when (it’s fun to imagine) all men were mighty, all women were beautiful, all problems were simple, and all life adventurous. In such a world, gleaming cities raise their shining spires against the stars; sorcerers cast sinister spells from subterranean lairs; baleful spirits stalk crumbling ruins; primeval monsters crash through jungle thickets; and the fate of kingdoms is balanced on the bloody blades of broadswords brandished by heroes of preternatural might and valor.

The purpose of these stories is neither to teach the problems of the steel industry, nor to expose the defects in our foreign-aid program, nor yet to air the problems of the housewife. It is to entertain. These stories combine the color, the gore, and action of the costume novel with the atavistic terrors and delights of the fairy tale. They furnish the purest fun to be found in fiction today.

You can quibble with some elements of what De Camp wrote. I myself find it a little flip (and that flippancy lies at the heart of and weakens much of his own S&S writing) for a genre that can wander into some pretty dark places. Still, I love and agree with his stress on “fun.” I don’t need it solve the problems of the world, I want it to take me to some place other than my mundane life and give me a few moments of escape.

Swords & Sorcery is an excellent primer on the formative stage of heroic fiction, containing a sample by every major author of the field’s youth, from Lord Dunsany to Fritz Leiber. It’s not a perfect collection, but if you want to see where the genre comes from this is about as good an introduction as I know. 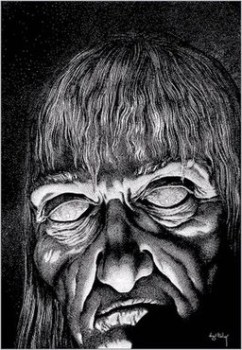 “The Valor of Cappen Varra” by Poul Anderson is a fun tale of  a minstrel traveling with a boatload of Viking types who is forced to confront a troll. Later, Anderson would rework the character and contribute him to the Thieves’ World series.

Lord Dunsany’s “Distressing Tale of Thangobrind the Jeweller” tells of the downfall of a bold thief when he goes after something no one’s ever been able to steal. Typical of Dunsany’s writing, even in such a short piece, there are several moments of beautiful and strange inventiveness:

It was quite dark when he went by the towers of Tor, where archers shoot ivory arrows at strangers lest any strangers should alter their laws, which are bad, but not to be altered by mere aliens. At night they shoot by the sound of strangers’ feet. O, Thangobrind, Thangobrind, was ever a jeweller like you! He dragged two stones behind him by cords, and at these the archers shot.

Sadly, “Shadows in Moonlight” is a lesser Conan adventure from Robert E. Howard. Conan and Olivia, a princess escaped from bondage, end up on an island with pirates, carnivorous apes, and other, unknown horrors. The plot’s pretty weak. But even weak REH has its good elements. In only a few paragraphs, he does what wordier writers might have needed chapters for, and sketches out the terrible ordeals Conan underwent before encountering Olivia.

“The Citadel of Darkness” is one of Henry Kuttner’s handful of forays in heroic fantasy. Prince Raynor is the deposed ruler of the city of Sardopolis. Raynor and his companions fall afoul first of bandits, and later a sorcerer commanding the powers of the zodiac. Good solid early writing from one of the best sci-fi/fantasy writers.

In Fritz Leiber’s “While the Sea-King’s Away” the Gray Mouser is forced to follow his seemingly delusional friend Fafhrd down a suddenly-appearing tunnel of air under the waves. It’s not one of the better Lankhmar stories, but there’s enough fun interplay between the two companions to make the story enjoyable.

I won’t argue in any way that H. P. Lovecraft’s “The Doom That Came to Sarnath” is heroic fantasy or belongs here. It’s one of HPL’s Dunsany-inspired stories and features not much in the way of characters or atmosphere. It simply tells of the well-earned fate of a haughty city after it carries out genocide on its froggy neighbors. 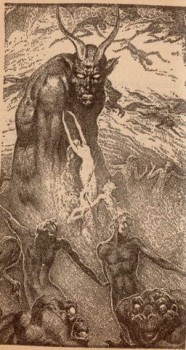 For me, the best story in Swords & Sorcery is C. L. Moore’s “Hellsgarde,” featuring Jirel of Joiry, the first female lead in the genre. Lin Carter foolishly called her a “gal Conan.” Moore’s Jirel stories are darker and stranger than much of the Conan series. This one is filled with warped, evil characters and events inside a terrible castle. It’s the last of the Jirel stories and a very disturbing one with which to end the series.

The book ends with one of my favorite Clark Ashton Smith Hyperborean stories, “The Testament of Athammaus.” The last executioner of the the lordly city of Commoriom describes what happened to his home when he carried out his duty toward a murderous bandit with demon-blood running in his veins.  Looking back on what happened, he tells it in these words:

Now must I write the things that are formidable unto Earth and the dwellers of Earth; the things that exceed all human or terrene regimen; that subvert reason; that mock the dimensions and defy biology. Dire is the tale; and, after seven lustrums, the tremor of an olden fear still agitates my hand as I write.

De Camp would go on to publish three more books of reprints: The Spell of Seven, The Fantastic Swordsmen, and Warlocks and Warriors. He comes back to most of the authors in Swords & Sorcery in each of those.

This book is filled with wonderful art by the great Virgil Finlay. Each story features an original black and white illustration. While you might have all the stories in Swords & Sorcery already, you don’t have the pictures — and that alone should make it a tempting addition to your S&S collection.

Sprague De Camp gets a lot of grief for his handling of REH’s Conan stories over the years. While I think the criticism is fundamentally sound, often it goes over the top. Diluted as much of it was, it was through the De Camp edited ACE Conan books that I, and most everyone of my friends first met Howard’s hero.

Much of De Camp’s own fiction is quite good and very funny. The Harold Shea books in particular are a ball. More importantly, between him and Lin Carter, few people did as much to popularize swords & sorcery and bring it to a mass audience.

I was highly disappointed with the three anthologies from recent years that I’ve read (including Swords & Dark Magic and The Sword & Sorcery Anthology). This sounds like a really good pick to give a try at a really old one and see if it’s any better.

Such a good collection, and I don’t begrudge the inclusion of Sarnath. Love, love, love the Finlay illustrations.

Is REH’s “Shadows in Moonlight” elsewhere titled as “Iron Shadows in the Moon.” If so, that is one of my favorites! I agree, there may not be much as far as story there, but the atmosphere is first rate, and REH gets all the best Conan ingredients in there, as you point out: a damsel in distress (who actually DOES something more than choose Conan as a still-dangerous and yet preferred option to other monsters), pirates, ape-men, and an eldritch horror, the backstory of which is given, admittedly, fairly clumsily through a dream, but it convinces me.

I wonder if the change in title also indicates some tinkering by de Camp. I only know of (haven’t investigated) de Camp’s reputation for “finishing” or “rewriting” or “adapting” other REH tales into Conan tales, but in the Del Rey version of “Iron Shadows” that I read, Conan describes the features of some eldritch statues as “Negroid.” In a Roy Thomas/John Buscema adaptation for Savage Sword of Conan, Thomas has Conan more properly refer to an actual nation of the Hyborian Age. It’s interesting to see what later writers do with REH’s potentially problematic race and gender issues.

Always good to get Fletcher’s perspective. I shared this on the Goodreads Sword & Sorcery group page, since we have S&S Anthologies as one of our topics for Jan-Feb. All are welcome to join the discussion/groupread. Every Jan-Feb we read S&S Anthologies. All are welcome to partcipate. We are finding some new collections that are pretty good. https://www.goodreads.com/topic/show/2133374-2015-jan-feb-a-anthologies

Athammaus is my favorite Clark Ashton Smith story. Perhaps because I knew so little about Smith before reading it, it came across as a comedy to me. I don’t know how it plays as a horror story, but as comedy, it’s genuinely brilliant.

Many of Smith’s stories, especially the Hyberborea ones, dance along that same razor’s edge.

[…] Black Gate — “The swords & sorcery that works best for me, the tales that get my heart pounding, come in short story form. It was Robert E. Howard’s ‘Beyond the Black River’, Fritz Leiber’s ‘Ill Met in Lankhmar’, and Karl Edward Wagner’s ‘Reflections for the Winter of My Soul’ that made me love this genre. In those stories, the authors distilled everything down to forty or fifty pages of concentrated action, mayhem, and bloodshed. There are no wasted words, no longuers. While all three authors wrote decent enough S&S novels, it’s their short stories that roar down the tracks like a train, pulling me along. S&S is a fiction of action and plot. I want speed; economy of story-telling.” […]