I’ve been on something of a Fletcher Pratt kick recently, ever since I purchased a fine collection of old paperbacks that included five of his books, including The Well of the Unicorn and Tales From Gavagan’s Bar (co-written with L. Sprague de Camp), both of which I recently wrote up as Vintage Treasures.

Way down in the bottom of that box was a copy of The Compleat Enchanter. I didn’t pay much attention to it at first. Everyone who collects classic American fantasy has two or three (or five or six) copies of The Compleat Enchanter. It’s something of a classic, in a worn sort of way. It doesn’t get much attention these days, because it’s a light, humorous tale, the very opposite of the kind of thing that usually interests me. And so, out of habit, I didn’t give it much attention.

That was a mistake. I’ve ignored The Compleat Enchanter for the better part of 40 years, but when I finally picked it up this week I was quickly captivated. Yes, it is a screwball fantasy, about a psychology professor named Harold Shea who stumbles on equations that transport him into parallel universes, and who uses this ability to visit magical worlds shaped by the mythologies and legend of Earth. But it’s also crammed full of crisp dialog and surprising twists, and the unique charm of De Camp and Pratt, two American masters who were obviously having a lot of fun with the their creation. 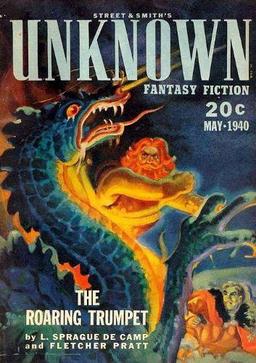 The Compleat Enchanter began with “The Roaring Trumpet,” a novella published in the May 1940 issue of Unknown Fantasy Fiction, edited by the great John W. Campbell. Campbell was hungry for fantasy for his new magazine, and “The Roaring Trumpet” was enough of a success that Campbell wanted more. The two collaborators responded with a second novella, “The Mathematics of Magic,” published in the August 1940 issue. De Camp and Pratt returned to their hapless dimensional traveler in the April 1941 issue of Unknown with “The Castle of Iron,” a 35,000 word novella.

Although the tales are fantasy through and through, there’s also a thin layer of science fiction. De Camp and Pratt imagined that the science of psychology, in its infancy in 1940, could conceivably allow practitioners to project themselves into new target realities by aligning their mind using a system of symbolic logic. In “The Roaring Trumpet,” Shea attempts to visit the realm of Irish Mythology, but accidentally ends up in the realm of Norse mythology instead, peopled with brusque gods and mighty monsters. In “The Mathematics of Magic,” he bumbles into the world of Edmund Spenser’s The Faerie Queene, with its knights, sorcerers, and beautiful maidens.

The system of symbolic logic Shea designs is, at best, an inexact science, and he doesn’t always end up where he expects to be. On top of that, most of the places Shea (and his colleagues Reed Chalmers and Walter Bayard) visit have different underlying physics, which means that, as they refine their system to mimic magic, the various spells they attempt typically have unexpected (and humorous) consequences.

All told, De Camp and Pratt wrote five stories together featuring Shea and his companions: 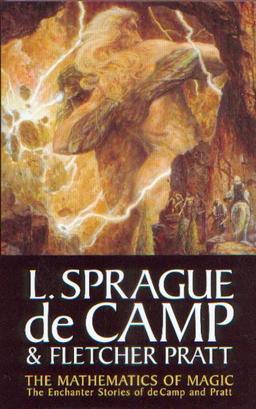 They’ve been collected over the years in a number of different volumes. The first two stories were collected in hardcover as The Incomplete Enchanter by Henry Holt and Company in 1941, and reprinted in paperback by Pyramid Books in 1960. “The Castle of Iron,” a 35,000 word novella that was reprinted as a standalone hardcover by Gnome Press in 1950.

The Compleat Enchanter was the first real omnibus collection, gathering the first three stories, alongside de Camp’s essay “Fletcher and I,” a tribute he wrote after Pratt’s death in 1956. It was first published in hardcover by the Science Fiction Book Club, and reprinted in paperback by Del Rey in April 1976, with a fine cover by the Brothers Hildebrandt. The Hildebrandts also did the interior illustrations. It is 420 pages, priced at $1.95.

More recently, The Complete Compleat Enchanter (Baen, March 1989) collects all five novellas in the series in a massive 532-page volume, under a cover by Thomas Kidd. Sadly, it does not include de Camp’s essay.

All seven tales were eventually collected in one volume, The Mathematics of Magic: The Enchanter Stories of L. Sprague de Camp and Fletcher Pratt, published in February 2007 by NESFA Press.

Starting in 1992, other authors began to contribute to the cannon as well, including such well known writers as Christopher Stasheff, Holly Lisle, John Maddox Roberts, Roland J. Green, Frieda A. Murray, Tom Wham, and Lawrence Watt-Evans. Stasheff and de Camp oversaw the new continuations, and the series became known as the “Enchanter” series. There’s a nice summary list of those later tales here.

So if you’re looking for a copy of The Compleat Enchanter, you have a lot to choose from. I bought mine as part of a collection of a dozen unread fantasy books sold for just $4.99 on eBay last month. In fact, that was a fertile lot… so far I’ve covered the following books from the same set:

Thank you for this post.
The Shea stories were the first fantasy I – as a teenage science fiction fundamentalist – ever read. I was in high school, some thirty-odd years ago.
As soon as I finished the Shea stories, I tracked down all the Sprague De Camp & Pratt works I could find.
And when I got to the end of those, I decided to take a look at those Whatsisname the Barbarian books Sprague De Camp seemed to have been involved in…
This is one of the books that made me (and my book collection). So, thank you again for taking me down memory lane.

Glad to oblige! That’s one of the reasons I enjoy including as many covers as I can while discussing old books… different readers around the world have read any different editions, and you never know which cover will brings back fond memories.

Did you enjoy de Camp’s Conan books? I ask because he gets a bad rap these days for riffing on the genius of Robert E. Howard. But I know a great many fans were introduced to fantasy by them.

I read the first two Enchanter books in Pyramid paperbacks in the early ’60s and still have those copies. I finally read the third book many years later, but I’ve never read any of the continuation stories.

I was introduced to Conan through publications of de Camp in Fantastic Universe in the ’50s. Whatever else people say about him, and I’ll always be grateful to him for that. I later met de Camp and his wife, Catherine, and they were both kind and gracious people.

John,
I had many discussion with REH fans that despise Sprague de Camp – often forgetting that without Lyon Sprague De Camp championing Howard’s legacy (if in a skewed way), Howard would probably be a little-known author, cherished by a small group of pulp aficionados, and not a popular and widely respected author.
So, all in all, I like Sprague De Camp very much; I certainly prefer his own works compared to his Howard pastiches, and yet I think at least one of his Conan stories, “The Treasure of Tranicos” (a reworking of a non-Conan piece by Howard) is a great Conan yarn.

This is a surprisingly influential series.

I would make one recommendation – don’t read the book straight through; space out the individual stories. I went from cover to cover and my enjoyment of the tales steadily diminished, which was my fault, I think.

Great post–a real blast from the past for me. THE COMPLEAT ENCHANTER was the first Ballantine Fantasy I read that had the new cockatrice symbol. I didn’t like the change from the unicorn symbol and (truthfully) still don’t. But the book itself is great.

I have to admit that, for me, though, the series sort of peters out. “The Roaring Trumpet” is brilliant. (“Ingvi is a louse!”) “The Mathematics of Magic” is almost as good. I was a little cooler about “The Castle of Iron” as a kid and now I sort of hate it: it handles the characters of ORLANDO FURIOSO very crudely, making Duke Astolfo into a dialect joke–sort of a Lord Haw-Haw. As an adventure fantasy it’s still pretty good, though.

I’d be happy to get you a copy, Zeta!