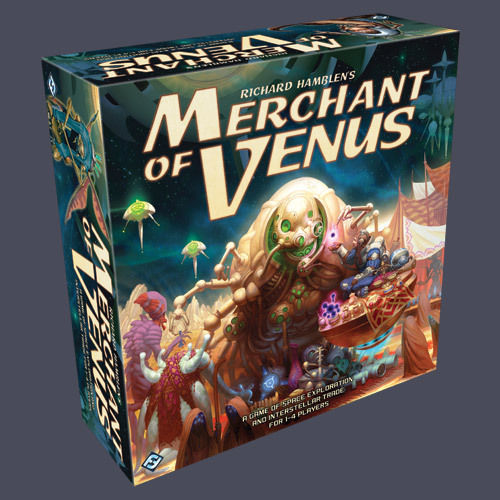 In 1988, during the golden age of Avalon Hill, the company published an unusual game called Merchant of Venus. The title, of course, was a play on Shakespeare’s The Merchant of Venice… the game was set in a cluster of stars far from Earth, and Venus didn’t feature at all (It also had nothing to do with Frederik Pohl’s classic novella “The Merchant of Venus,” first published in the August 1972 Worlds of If, which featured the first appearance of the Heechee).

Unlike Avalon Hill’s other science fiction games — like Stellar Conquest and Alpha Omega — the focus of Merchant of Venus wasn’t crushing your opponents with massive fleets of warships. Players were explorers and traders in an unexplored part of the galaxy during a reawakening of galactic civilization, discovering long-lost pockets of civilization, and opening fabulously profitable trade routes. Playable with up to six players, the game also had an intriguing solitaire version, which featured action-heavy combat with a strange militaristic race. The Avalon Hill version was designed by Richard Hamblen, and has been out of print for nearly 30 years. Like most Avalon Hill games, it’s highly collectible now, with copies selling for $35-100 on eBay.

In 2012 Fantasy Flight Games, in partnership with Stronghold Games, released a deluxe edition of Merchant of Venus, with upgraded components and a two-sided game board. One side features the classic game by Richard Hamblen; flip it over, and you can play a more contemporary version of the game, with new rules by Robert A. Kouba. 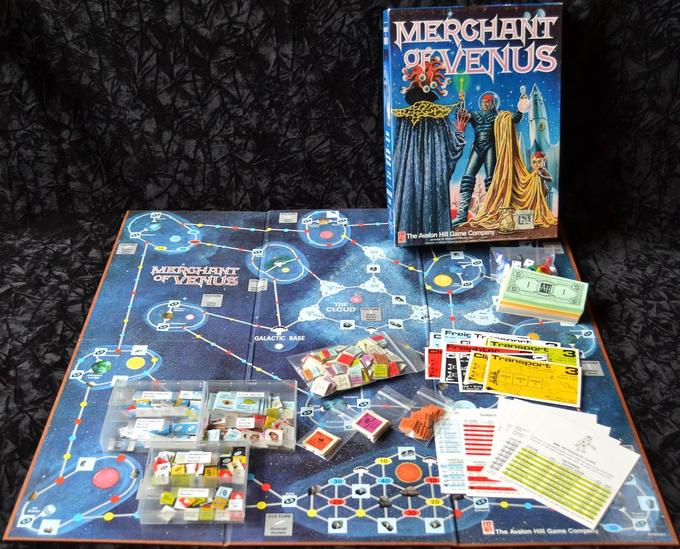 The 1988 edition of the game (above) had a sturdy and colorful board displaying a great many trade routes and tantalizing unexplored systems, and came with cards, counters, and space bucks. From a component standpoint, you certainly got your money’s worth.

The new edition (below) faithfully captures the same feel as the original, and comes with four plastic ships to represent the players. You can play as one of four different races: Human, Whynom, Qossuth, or Eeepeeep. The new version, sadly, supports only up to four players.

Here’s the imaginative copy on the back of the box, which sets the stage for your grand adventures in interstellar capitalism.

Cluster 5632 requesting removal of Rastur sanction protocols and immediate construction of Galactic Base. Rebuilding of war-torn sectors has begun. Wherebouts of friendly civilizations unknown. Need aid in establishing trade routes between isolated cultures. Repeat: Rastur invasion has been put down. Cluster is ready for trade.

Fire up your ship’s engines and rocket towards the nearest telegate — there are credits to be made! The trade routes of a war-torn galactic cluster have reopened and ambitious merchants stand ready to exploit them for huge profit.

In Merchant of Venus, 1 to 4 players take the roles of intergalactic merchants competing to trade goods with alien cultures. Will pirates, space junk, or sabotage end your business? Or can you wheel and deal to financial superiority?

This edition of Merchant of Venus contains a new reimagined game design, as well as Richard Hamblen’s classic design. Adventure and wealth await. 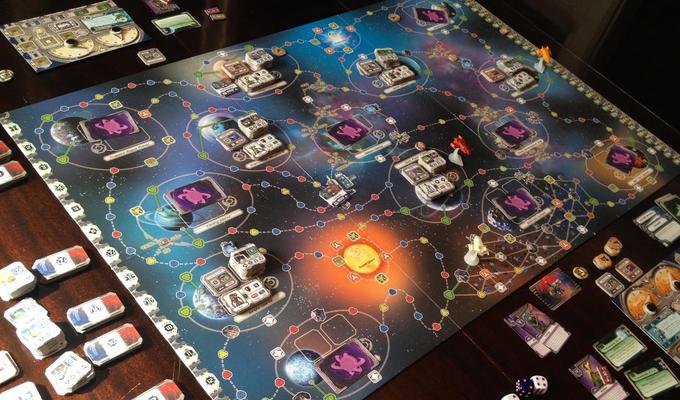 One innovation Fantasy Flight offers that we didn’t have in 1988 — a solo game tracker. You can download the PDF from the Fantasy Flight website, and share your hard-won solo ventures with other players.

Here’s a closer look at the box cover art for the 1988 version. 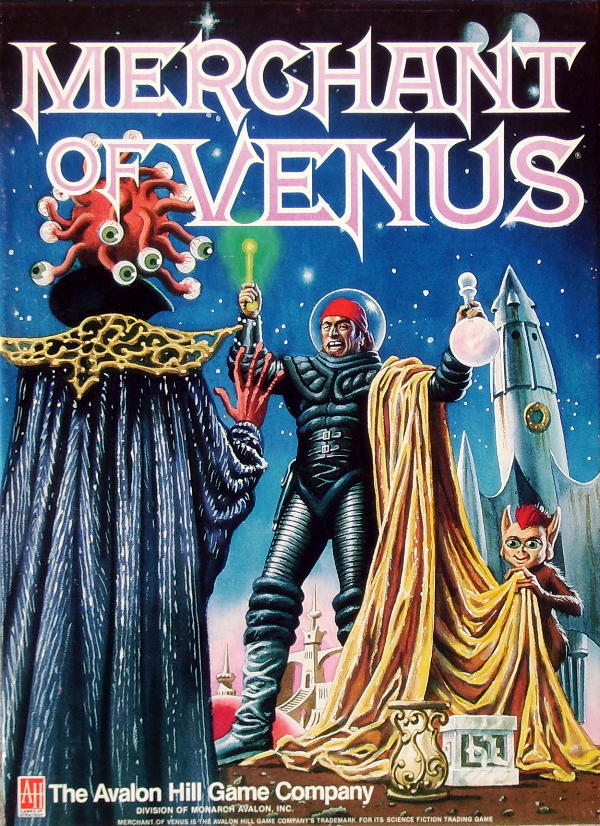 Merchant of Venus retails for $79.99. I was lucky enough to buy a copy for $25 during the Fantasy Flight holiday game sale, just before Christmas (they had a similar sale last year). I haven’t had the chance to see how it plays yet, but I’m looking forward to it… just as soon as I summon the willpower to crack the shrinkwrap.

Awesome title! I can’t believe though that some SF writer out there hasn’t come up with this before.

Scratch that, I just read above that Pohl had!

I’ve played the original many times, and I’m never disappointed to see it brought out. I think all my sessions have been four players, which the owners assured me was best. They also suggested not bothering with the solo play, but don’t recall the details. I was probably busy loading up my clipper with a drive and fares and zipping around the board.

Glad to hear from someone who enjoyed the original version!

I never had the impression that the Avalon Hill version was particularly successful… it vanished from stores fairly quickly, and was never easy to find. So I admit I was a little surprised to see a re-make.

I hope it’s been successful for Fantasy Flight. I’d love to see them update other classic (and neglected) SF games.

I never played this game but it looked good. I did play Cosmic Encounter, that game was fun. My favorite alien was the Silencer who could tell other players that they couldn’t talk. Needless to say I was banned from playing that character. I liked Avalon Hill because they went out of their way for play balance.