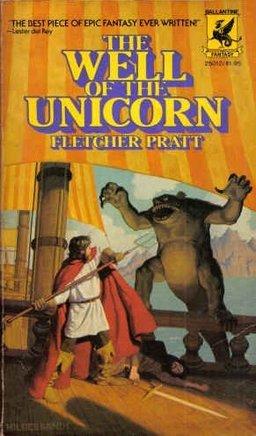 It’s no surprise that I don’t get to pick up as many novels as I used to — and I finish even fewer than I start. I tell myself that at least I’m pretty well grounded in classic fantasy… but even then there are embarrassing holes. Like Fletcher’s Pratt’s groundbreaking The Well of the Unicorn, which the great Lester del Rey called “The best piece of Epic Fantasy ever written.” It’s one of his two truly major novels (the other being The Blue Star), and it influenced an entire generation of fantasy writers. It has been out of print for decades, and there is no digital edition, but copies aren’t hard to find. I tracked one down last week, and I’m very much looking forward to reading it.

A rousing epic fantasy of romantic adventure and swashbuckling sorcery by the author of The Blue Star.

Outcast of the Well

The ruthless and greedy Vulkings drove young Airar Alvarson from his people and his heritage. But soon, aided by the mysterious enchanter Meliboe, he embarked on a desperate odyssey through a treacherous world where magic worked — sometimes at a perilous price. As one of a band of desperate rebels, fighting against his Vulking oppressors, Airar’s future quickly became enmeshed with a trio of women… each one seemed born to alter his destiny!

Gython: A snow blonde beauty who fired his blood with a heart as cold as ice…
Evadne: A savage warrior maid determined to have her way with her battles and her men…
Argyra: A princess of the Well from whose waters come peace. A lady who brought him only turmoil and strife…

In a flash Airar Alvarson was trapped in the bloodiest battles, the most sinister of intrigues… and the most amazing romance of all.

The Well of the Unicorn was first published in hardcover by William Sloane Associates in 1948 (under the name George U. Fletcher). It was first printed in paperback in 1967 by Lancer Books, and then Ballantine in May 1976, with a classic cover by the Brothers Hildebrandt. The Ballantine edition is 388 pages, priced at $1.95 (click the image at right for a bigger version).

I was led to this work as a result of seeing the map in J. B. Post’s An Atlas of Fantasy (and not the only time that connection was used). I remember it as equal parts swashbuckling and philosophical, set in “dolorous Dalarna”, as one character likes to repeat.

And I have not finished reading The Blue Star, so I have quite the number of holes in my “ground”, too.

I like Pratt and I liked this book, but it’s not exactly a light read. The knotty style isn’t easy to get into; dense is the best word for it, I guess. It’s full of quirky characters who do unexpected things, and the political/economic dimensions of the fantasy world are are very solidly filled in. With Pratt’s background as a military historian, the military actions in the novel are convincing in a way that they often aren’t in other fantasy novels. It’s also full of sly satire and offbeat jokes; the fabled well of the title never appears in the book at all. It’s a worthwhile book but one that certainly won’t appeal to everyone.

I love this book, though it feels truncated or in need of a sequel.

I have that exact edition. I know I made my way through it many years ago, but I should probably give it another go one of these days.

Love this book. I re-read it every 4-5 years. Like Thomas said, it can be a tough read.

A genuine classic–a very dense read with a bittersweet ending. But not as depressing as THE BLUE STAR. I owned the Lancer Books edition until it fell apart (Lancer Books–don’t get me started), and since have owned a couple of Ballantine editions with different covers. I’d definitely put it on the same shelf as THE WORM OUROBOROS and THE LORD OF THE RINGS.

The book itself is a sequel to Dunsany’s fantasy play, “King Argimines and the Unknown Warrior”. I don’t think that’s important for readers of the book, but it must’ve been important for Pratt.

Maybe the sequel, if there is one, should jump genres again–maybe it should be a rock opera or a graphic novel or something,

Pratt’s solo fantasy is very hostile to magic; it’s almost always a force for harm in his worlds, even when it seems to be benevolent. I love marvels in my fantasy reading, so this puts me at odds with “George U. Fletcher”. But it doesn’t keep me from rereading the book every now and then.

Everyone’s doing a great job selling this, so, I guess I should finally read this this year. I think I have two copies kicking around somewhere.