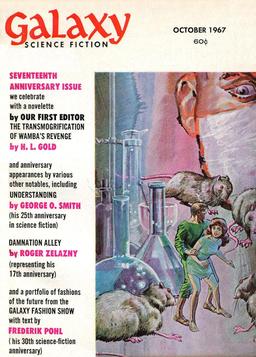 A bit of a change of pace here, a late ’60s issue of Galaxy. Frederik Pohl was the editor. It is billed as the “Seventeenth Anniversary Issue, and the conceit is that the contributors are all celebrating an anniversary in the field. For example, Pohl himself published a poem in an SF magazine in 1937, making this his 30th anniversary. George O. Smith’s first story was published in 1942, so his 25th anniversary. H. L. Gold is here as the founding editor. Fair enough. The contributor that puzzles me is Roger Zelazny. The cover says “representing his 17th anniversary, but never explains that. This was the fifth anniversary of his first published story. Does it mean he started reading SF in 1950? I don’t know – it’s not explained at all.

The cover is by Gray Morrow, illustrating Gold’s story accurately enough. Interiors are by Gaughan, Morrow, and R. Dorfman (his or her only appearance, according to the ISFDB, in SF). Willy Ley contributes a science essay in his “For Your Information” series, which ran from 1952 through 1969. This one, “The Worst of all the Comets,” is about the great comet of 1680, which has a 574 year period, and which one writer speculated was the comet that caused the Biblical Flood (by raining water on the Earth when it passed very close). Pohl’s brief editorial is about the changes since his poem was published, in 1937.

Algis Budrys’ Galaxy Bookshelf covers Damon Knight’s anthology Worlds to Come (he objects that too many of the stories aren’t really SF), a reissue of Fritz Leiber’s The Big Time (which, Budrys reminds us, is really a play), Robert A. Heinlein’s landmark collection The Past Through Tomorrow (his big Future History collection, which Budrys praises highly), and, most significantly, Samuel R. Delany’s The Einstein Intersection. In the Thomas Disch piece just reprinted in Stories for Chip Disch writes of Delany telling him happily that Budrys had declared him (Delany) the best SF writer in the world. I don’t know if this is the review that prompted Delany’s happiness (apparently it was his review of Nova), but it would certainly make one happy. One quote: “The man simply operates on a plane that Robert Heinlein never dreamed of.” 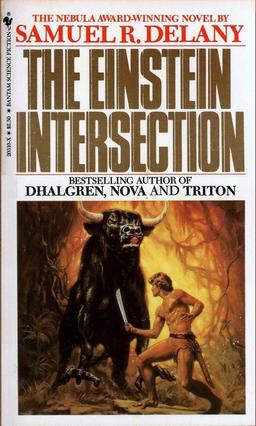 There are two somewhat humorous “non-fact” articles. One is by Pohl himself, illustrated by his wife Carol, purporting to describe the fashions of the future (which do seem to involved displaying the feminine form more completely, plus weird shoes and hats), and the other is by Poul Anderson, called “Poulfinch’s Mythology,” and it is a description of the gods of America from a far future vantage: such gods as Buro, Atomika, Toolsmith, and Bom. Mildly amusing, a bit dated.

There are only three stories, all listed as novelettes, despite the great length of a couple of them:

“Damnation Alley” is of course a pretty famous story, especially after it became a novel (in 1969) and a film (in 1977). The film is by all accounts only loosely based on the novel, and Zelazny is said to have disliked it. I had, I confess, never read the novel or novella, nor seen the film. Barry Malzberg is quoted in Wikipedia as calling the novel “a mechanical, simply transposed action-adventure story written, in my view, at the bottom of the man’s talent” – a judgement with which I am inclined to agree. It’s set in a rather ’50s-ish postapocalyptic world. Hell Tanner is a criminal living in the nation of California. He is offered a pardon in exchange for taking some medicine across the former US to Boston.

This passage is called “Damnation Alley,” and it is full of bandits, radioactive craters, storms, giant gila monsters, bats, snakes, and other menaces. Tanner starts out in a convoy of three tank-like vehicles, and over time the other drivers are killed, including Tanner’s unwilling partner. He picks up a girl (from a motorcycle gang), and seems to slowly gain something of a conscience. None of this is surprising, and much is silly, especially the square-cube law violating monsters. That said, Zelazny could write action well, and there are bits that work nicely, even some lyrical bits. It is what it is – reasonably well done but not particularly original action-adventure. The problem is, I expect a lot more from Zelazny. 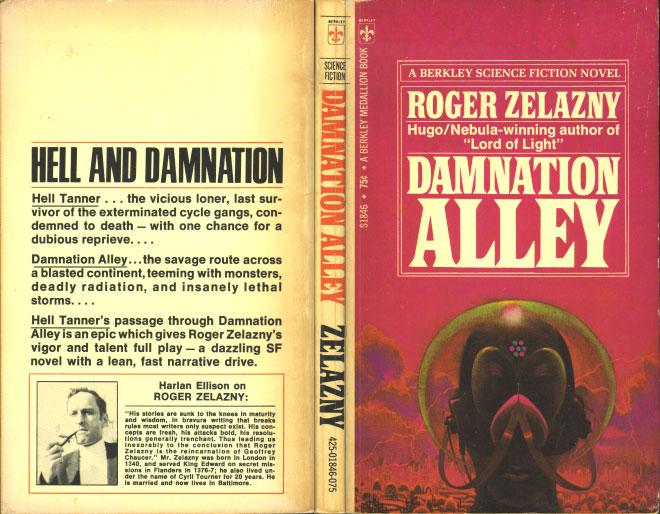 L. Gold (1912-1996), Canadian born but resident in the US from the age of 2, is most famous in the field for his role as the founding editor of Galaxy. He stayed on officially until the October 1961 issues, though it is often suggested that his then assistant, Pohl, was de facto editor for the last couple of those years. Gold suffered from a form of PTSD arising from his experiences in World War II, and was basically unable to leave his apartment. He began writing SF in the 1930s, often as by “Clyde Crane Campbell.” He made something of a name for himself with two early stories for John W. Campbell, “A Matter of Form” in Astounding, and “Trouble with Water” in Unknown. His best-known later stories are “The Old Die Rich” and “Bodyguard” (as by “Christopher Grimm”), both of which appeared in Galaxy.

“The Transmogrification of Wamba’s Revenge” was one of his last stories. It’s pleasantly enough executed but a bit silly. Wamba is a Pygmy princess, of a quite advanced tribe which deals with a rather unpleasant “Great White Hunter” for modern supplies. One day the GWH shows up guiding a scientist looking for new medicines. The scientist’s unpleasant wife hooks up with the GWH, and Wamba ends up using one of the unique plants the pygmies know of to miniaturize them. This threatens to be a big problem, but with the help of the scientist, Wamba and her father and husband and the other pygmies are able to turn it into a solution to the world’s problems. It’s a bouncy read, if perhaps a bit queasily culturally appropriative in its generally positive but cliched portrayal of the pygmies, and not terribly believable.

George O. Smith (1911-1981) began publishing in 1942 with “QRM Interplanetary” in Astounding, the first of his Venus Equilateral stories. Those stories are uber-gadgety, which I think distorts his reputation. He wrote about 10 novels, and a few dozen stories, and some of them were quite good, and not terribly gadgety. The best of his novels, by repute, is the last, The Fourth “R” (1959).

I admit I approached “Understanding” without much optimism, but I was pleasantly surprised. Not that it’s a masterpiece, but it’s fun work. It’s set on Xanabar, a planet lying between the Scholar’s Cluster, where the best and brightest of the entire galaxy study, and Earth. Terence Lincoln is an adolescent from Earth, who has not yet attained “Understanding.” He is spending part of his school break on Xanabar, when he suddenly finds himself mysteriously lost and in trouble. Luckily a couple of Earth-based agents are on hand, wise to the nasty ways of the law in Xanabar. These are Peter Hawley and his dog Beauregarde. Beauregarde has the dog’s version of “Understanding,” which makes him intelligent and able to speak. He helps Terry out of his fix, on the way leading Terry towards the human “Understanding”. It’s a very slight piece, no doubt, but it’s pleasant reading. There was a linked story, “Scholar’s Cluster,” in Analog in 1980 (and thus Smith’s last story), which I surely read but don’t remember.

Rich Horton’s last Retro Review for us was the October 1959 issue of Amazing Science Fiction Stories. See all of Rich’s retro-reviews here.

Zelazny was GoH at I-Con I in Iowa City, IA, which took place over the Halloween weekend 1975. During a panel he explained that _Damnation Alley_ was written just to fulfill a three-book contract, said 3-booker was what a lot of the publishers then wanted (as they do now), so he had to whip something together. He cautioned new writers in the audience that unless they wrote quickly enough as beginners to do a 3-book contract that some publishers _may_ not take their first one even though it might be good.

The publishers, he explained, didn’t want to spend time and money on a single novel (cover art, promotion, whatever) and then if the book didn’t earn out would be stuck with nothing. So they wanted time to build an author’s name and have more product available by that author so in case the first book took off they’d have something else to get before the buying public. Roger said he wasn’t quite ready for that (at the pace he wrote) so had to hurry up and give his publisher _something_, and it turned out to be Damnation Alley.

Maybe it was Zelazny’s wedding anniversary? Or some inside joke.