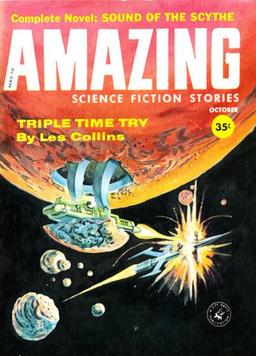 Here’s an issue from the first year of Cele Goldsmith’s tenure, and a significant month for me – I was born October 5, 1959. It has an interesting mix of authors – the first (and arguably only) SF novel by a Grand Master, a fine early story by one of my personal favorite writers in the field, and four stories by obscure names (though one of those at least is a pseudonym for a fairly well-known writer).

The cover is by Leo Summers, and depicts some sort of anti-spaceship installation hidden in a small asteroid, firing on a spaceship. Interiors are by Summers and Finlay (with one uncredited). There is a cartoon by “Frosty.”

Norman Lobsenz contributes his usual brief editorial, this one referring to Eric Frank Russell’s attack on astronomy as an “inexact science.” S. E. Cotts’ book review column, The Spectroscope, was at this time only allotted two pages. The reviews are of George O. Smith’s The Fourth R (fairly positive), Brian Aldiss’ collection No Time Like Tomorrow (very positive), and Jeff Sutton’s Bombs in Orbit (mistitled, amusingly, Bombos in Orbit in the review), not too positively.

The letter column, “… Or So You Say”, has mostly short letters, with only one name I recognized (Paul Zimmer, Marion Zimmer Bradley’s brother). The other letter writers are Edward J. Lynch (liked Silverberg’s “Collision Course”), Paul Shingleton (hated “Collision Course”, even though Bob S. is his favorite author), W. C. Brandt (loved “Collision Course”), Zimmer (seemed snarky about Doc Smith though it’s hard to say), Dave Boyer (loved stories by Sheckley and Douglas), David Locke (hated Doc Smith), Clark Peterson (is in favor of book length novels in the magazine), and Harry Thomas (defending Doc Smith from his detractors). Those who know fandom better than I remember David Locke particularly, as an active fan and letter writer, and also Shingleton and Brandt. 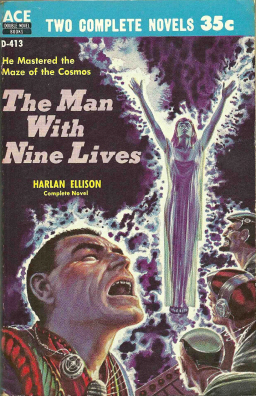 I spoke above of Harlan Ellison’s Sound of the Scythe as his only SF novel, which is a bit misleading. This story itself was, as seen above, a long novella. But it was combined with another novella (“Assassin!” from Science Fiction Adventures, February 1957) to become the novel The Man With Nine Lives, a 1960 Ace Double. This novel was reprinted as The Sound of a Scythe in 2011, expanded by 25%, according to the editor who reprinted it (Jason Davis), this being restoration of cuts made by Donald Wollheim.

It’s worth noting that the length of “Sound of the Scythe” and “Assassin!” together is about that of the Ace Double The Man With Nine Lives, but of course Ellison may well have expanded it before submitting it to Wollheim, only to see him cut it again. Ellison’s only other SF novels were the Belmont Double half Doomsman (really a novella) and the collaboration with Edward Bryant, Phoenix Without Ashes (Bryant’s novelization of Ellison’s original screenplay for the show that became The Starlost). 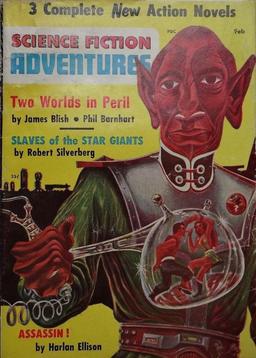 I will quote what I said about The Man With Nine Lives in my Ace Double review of that book:

My basic reaction to The Man With Nine Lives is that it reads like a drastically padded novella.

Cal Emory is a desperate man. As the novel opens, he is trying to kill Paul Lederman, but Lederman has the jump on him. Through flashbacks we learn why.

It seems that Emory and Lederman were college roommates. But Lederman, son of a rich man, stole Emory’s girlfriend, married her and then drove her to suicide, then engineered a cheating scandal that was blamed on Emory, getting him expelled. Lederman then hired Emory at his company (his father having died), supposedly out of charity. Emory finally figures out the truth and decides to kill Lederman.

However, he decides, unconvincingly, that he first must find a man named Patooch, apparently the ONLY person in the universe who can surgically alter him so that Lederman will not be able to find him. It turns out that the uber-villain Lederman has arranged for Patooch to be sent to “deepsleep”, this future’s replacement for prison. So Emory agrees to serve half of Patooch’s sentence. Then we learn what “deepsleep” is — which is a cute but silly idea. The computer that rules Earth and its colonies uses the minds of convicted felons, whose bodies are frozen, to be telepathically projected into aliens in order to prepare the Galaxy for future human advancement. Thus, Emory is sent to several different “alien” bodies to do various things to help Earth’s future — things like influence an alien species to exterminate a plant that will be poisonous to humans when they eventually encounter the planet. One of these episodes is the story “Assassin!” (Science Fiction Adventures, February 1957), retitled here “Travelogues Two: In Delpheron’s Armada”. This story has essentially no reason to be included in the novel: it is completely independent (and a tolerable story though no more than that, about a man sent to kill a sort of Genghis Khan of Space, complete with a nice ironic ending but not much interest until that point). The other travelogues make more sense, and the concluding one actually holds the seeds for the novel’s ending. Which is OK, nicely enough set up and if not convincing at least acceptable on the terms of the story. 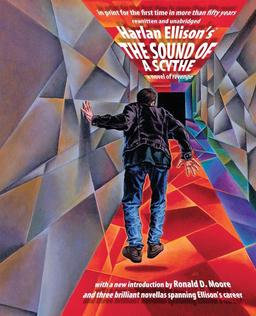 The other significant writer in this issue is Tom Purdom. Purdom began publishing in 1957, and wasn’t very prolific for the first three decades or so of his career, producing 18 short stories and five shortish novels. Starting in 1990 he has published an additional 3 dozen or so stories (which I suppose isn’t THAT much higher a rate!), mostly in Asimov’s. His early work was often pretty interesting, but his later work, to my taste, is much better, some of it very good indeed (and some reprinted in my Best of the Year books). He has published an interesting set of memoir essays about his career on his webpage.

“Excellence” shows his ongoing interest in psychology. It’s told by Frenchy Wald, who used to fight in somewhat organized battles with his gang, but who has given that up for love. But somehow he can’t quite love his new girlfriend. His counselor urges him to learn to love something simpler – the violin, say, or his cat. Meanwhile his girlfriend doesn’t seem to love him… maybe what he really loves is fighting? It’s an interesting and thoughtful story, if not quite a great one.

The other somewhat prominent writer in this issue is “Darius John Granger,” which is a pseudonym for Stephen Marlowe. “Stephen Marlowe” actually was at first a pseudonym for Milton Lesser, but Lesser legally changed his name to Marlowe in 1956. He was a prolific writer of SF – over a hundred stories and several novels appeared in the ’50s, but by the ’60s he was concentrating on crime fiction, mostly as by Marlowe. (His SF appeared primarily as by Milton Lesser, C. H. Thames, Adam Chase, or Darius John Granger.) Marlowe became a fairly well-known crime writer, and also attracted attention and praise for some fictionalized biographies of people like Christopher Columbus.

I have to confess I haven’t been all that impressed with the SF I’ve read by Lesser/Marlowe. In this context “The Most Important Man in the World” is not bad… perhaps the best thing I’ve read by him. It’s about the choice of a man to be sent to a satellite, to help keep the American presence in space at least a par on the Russian presence. The problem is, it will be a lonely job. Several men have been undergoing testing, and there are two straight-arrow prime candidates. But the head of the project opts for a third, much more individualistic but less disciplined candidate – more American, in his terms. The problem is, will this man, “the most important man in the world,” be willing? The story closes with him going AWOL and then discovering while encountering the people in the local town a reason to sacrifice himself. It’s kind of obvious and sentimental, but it pretty much works.

The other three authors are “Little Known Writers.” The story trumpeted on the cover is “Triple Time Try” by Les Collins. In a sense Les Collins is not “Little Known” in our field, despite a very modest writing career. However, he was a big name fan, under his real name Les Cole, along with his wife, Es Cole. Les co-chaired the 1954 Worldcon in San Franscisco. He published around a dozen short stories between 1954 and 1960 (one co-written with Es), with the last several of those stories as by Collins. “Triple Time Try” is a slightly overcomplicated and underconvincing story about a geologist who gets thrown into the past, and then back to the future, in steps. And three different times. There’s some adventure with things like plesiosaurs and dimetrodons, and the main main conflict is between the three versions of himself. Not badly done in a sense, but not really successful.

Harold Calin published four stories in the field between 1959 and 1961, three in Amazing and one in F&SF. “Unauthorized” is a confusing mess about a genius and his friend who build a starship on the sly and fly to Alpha Centauri, where they crash. There’s a strong “Man Who Lost the Sea” vibe, which is really odd because the stories appeared at the exact same time (the Sturgeon in the October 1959 F&SF), plus a weird bit about how their mission was signaled back to Earth, which made no sense to me.

Finally, John Brudy published only two stories (the second was in the June 1960 Amazing). “They Like Us” is about a disastrous expedition to Mars (shades again of “The Man Who Lost the Sea”!). The two astronauts return, but in terrible mental shape, and we slowly learn that the problem is the empathic/telepathic aliens there, and the way they got attached to the humans. Minor stuff.

Rich Horton’s last Retro Review for us was the January 1962 issue of Fantastic. See all of Rich’s retro-reviews here.