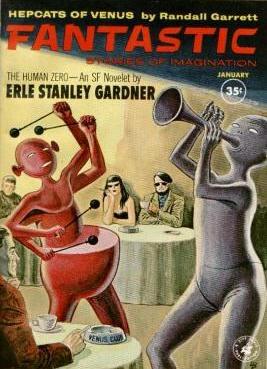 A Goldsmith era Fantastic, again, also from the stash I picked up at Sasquan. This one has a cover by Lloyd Birmingham, illustrating, rather faithfully, Randall Garrett’s “Hepcats of Venus” (a story probably published at about the last time one could have published it). The cover also advertises an Erle Stanley Gardner (of Perry Mason fame) SF story, “The Human Zero.” Interior illustrations are by Virgil Finlay, Leo Summers, and one Kilpatrick. I don’t recognize the last one, by name or style, and the ISFDB shows only 5 appearances by him or her, all in Amazing or Fantastic in 1961/1962.

The features are as usual for Fantastic on the scant side – Norman Lobsenz’ editorial and the letter column, According to You. The latter features a long letter by Mrs. Alvin A. Stewart on the subject of her dislike for David Bunch, in the process rehashing an ongoing debate. There are letters praising two serials in previous issues, James White’s Second Ending (which is excellent) and Manly Banister’s Magnanthropus, which I haven’t read, though I found the sequel (Seed of Eloraspon) to be fitfully enjoyable but far from a masterwork, and on the whole kind of preposterous. Paul Zimmer (presumably Marion Zimmer Bradley’s brother, and an author in his own right, Paul Edwin Zimmer) thought Magnanthropus the best serial Fantastic ever published. (Zimmer also takes a swipe at Bunch.) On the other hand, Fred Patten (a name to conjure with in fandom!) thought Magnanthropus a tremendous letdown after Second Ending.

I have to say I somewhat miss lettercols with that sort of spirited discussion of the stories in previous issues. 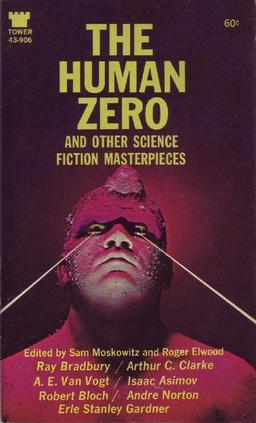 “Hepcats of Venus” is the sort of thing Randall Garrett could (and often did) toss off fairly casually, or so it seems to me: mildly amusing, a bit topical (if in this case by the time of publication probably a tad out of date), not too concerned with plausibility either as to scientific details or plot. Lord and Lady Curvert are supposedly British aristocrats but in reality they are Galactic Observers, charged with protecting the nascent Earth society from themselves and from nasty extraterrestrials. They notice that a jazz trio is making a splash at the Venus Club in New York… and that the the instruments seem to be part of the players’ bodies. Of course this all turns out to be a dastardly plot by shapechanging aliens…

Erle Stanley Gardner is of course famous as the writer of the Perry Mason stories, but early in his career he published in a variety of genres, including SF. Based on “The Human Zero,” his decision to concentrate on mysteries was a good one, to say the least. This story was part of a series of “classic” SF reprints curated by Sam Moskowitz. Moskowitz claimed he chose it in part because it’s a mystery, so Gardner fans wouldn’t be misled. The story has actually been reprinted several times… once in a Moskowitz/Elwood anthology called (distinctly implausibly) The Human Zero and other Science Fiction Masterpieces, a collection of lesser stories by big name writers (Clarke, Asimov, Bradbury, etc.) of which this is undoubtedly the least (see William I. Lengeman III’s Black Gate review here), and also in a Waugh/Greenberg/Olander anthology, Mysterious Visions (presumably SF mysteries), and as the title story of a collection of Gardner’s SF.

And it’s just awful. (Moskowitz, as I have said before, had dreadful taste, at least by my lights.) This story starts with a group of people including famous detective Sid Rodney (I kept reading the name as “Sir Rodney” and imagining a Lord Peter Wimsey sort — or, Denny Lien suggests, the hapless knight in The Wizard of Id) and “sob sister” writer Ruby Orman, reading a letter from kidnapped millionaire P. H. Dangerfield, begging his bank to authorize payment of the ransom demands. But the bank refuses, and attention is focused on insane inventor Albert Crome, who apparently was upset because his inventions failed to get financing. Now perhaps he has invented a disappearing ray or something… There’s some dashing around, an implausible “scientific” invention explaining the unexplainable, and a real villain (this last part at least plausible), not to mention a tacked on love story. 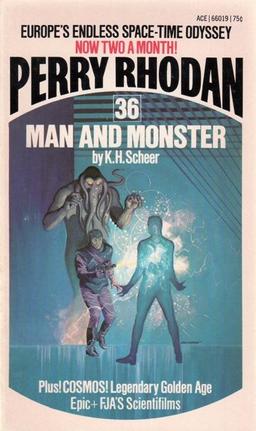 Albert Teichner published close to 20 stories, the first bunch between 1960 and 1964, mostly for Goldsmith but a few in Fred Pohl’s If, and a few outliers in the early ’70s in F&SF and Orbit. I’ve read just a couple of stories of his, and they seem sort of “almost good,” with at least interesting ideas, not quite convincingly worked out nor terribly well-written. “This is Your Death” is about a new idea for what we would now call a “reality show” – find people who are close to death and convince them to allow the network to film their last moments. The story kind of oversells, to my mind, the appeal of this idea, then sort of shifts gears to focus on the nasty corporate maneuvering of the various TV execs, especially the new star who thought of the idea for the show, and who is corrupted in the course of making it a success. The whole thing has its moments, but also its longeurs and its implausible aspects.

The three short stories are all by fairly (or indeed, extremely) little known writers. Best known is Paul Dellinger. “Rat Race” was his first story, and he didn’t publish another until 1973 in Perry Rhodan 36. He ended up publishing 20 or so, in F&SF and in Fantastic and in DAW anthologies. His latest appearance was a Curiosities column in F&SF in 2011. “Rat Race” is decent if minor SF horror, about a veterinarian who becomes convinced that an alien has taken over the brains of a rat in his basement.

Jesse Roarke published only two stories, according to the ISFDB, both in Fantastic in 1962. “Atonement” seems to be post-apocalyptic, in which a young man must go to his death as atonement for the sins of humanity after his child is born imperfect. All standard enough 50s-ish post Atomic war stuff – but then the means of his atonement is just weird, and I frankly didn’t get it.

Finally, as far as I can tell Gordon Browne published only this one story, “The Empathic Man.” (The ISFDB conflates him with the British children’s illustrator who lived from 1858 to 1932, which I find unlikely.) This story is, again, minor work, about a man who so empathizes with victims that he takes on their characteristics completely.

Rich Horton’s last Retro Review for us was the October 1960 issue of Amazing Stories. See all of Rich’s retro-reviews here.

That cover looks like something that might have appeared on Galaxy, which, it seems to me, tried rather too often to establish sf as something Sophisticated people could read; you know, over their martinis and all. Meh.