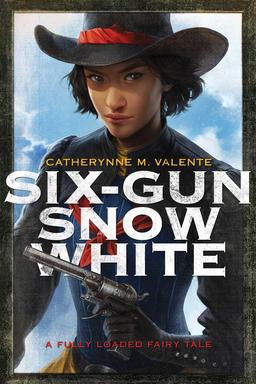 With all the fuss around Catherynne M. Valente’s new novel Radiance, I almost missed the fact that Cat’s 2013 award-winning novella, Six-Gun Snow White, was being brought back into print by Saga Press.

Six-Gun Snow White is a delightful reimagination of one of the best-known fairy tales of all time, featuring Snow White as a gunslinger in the mythical Wild West. It was nominated for every major award our field has to offer — including the Hugo, Nebula, and World Fantasy Awards — and it won the Locus Award for Best Novella of the year, for the limited edition from Subterranean Press. Now Saga is reprinting the book as an attractive trade paperback, with cover and interior art by Charlie Bowater.

Forget the dark, enchanted forest. Picture instead a masterfully evoked Old West where you are more likely to find coyotes as the seven dwarves. Insert into this scene a plain-spoken, appealing narrator who relates the history of our heroine’s parents — a Nevada silver baron who forced the Crow people to give up one of their most beautiful daughters, Gun That Sings, in marriage to him. Although her mother’s life ended as hers began, so begins a remarkable tale: equal parts heartbreak and strength. This girl has been born into a world with no place for a half-native, half-white child. After being hidden for years, a very wicked stepmother finally gifts her with the name Snow White, referring to the pale skin she will never have. Filled with fascinating glimpses through the fabled looking glass and a close-up look at hard living in the gritty gun-slinging West, this is an utterly enchanting story… at once familiar and entirely new.

Six-Gun Snow White will be published by Saga Press on November 10. It is 154 pages, priced at $24.99 in hardcover and $14.99 in trade paperback. The cover and interior illustrations are by Charlie Bowater.