The cover for this issue is by Leo Summers. Interior illustrations are by Dan Adkins (who also contributes the back cover) and Walker. The editorial recounts two recent cases of apparently fantastical occurrences in real life — with, in both cases, pretty straightforward mundane explanations. The letter column features letters from Leo A. Brodeur (a professor of French Literature at Laurentian University), discussing SF writers as “the poets of science”; and R. Martinkivi, praising the magazine. 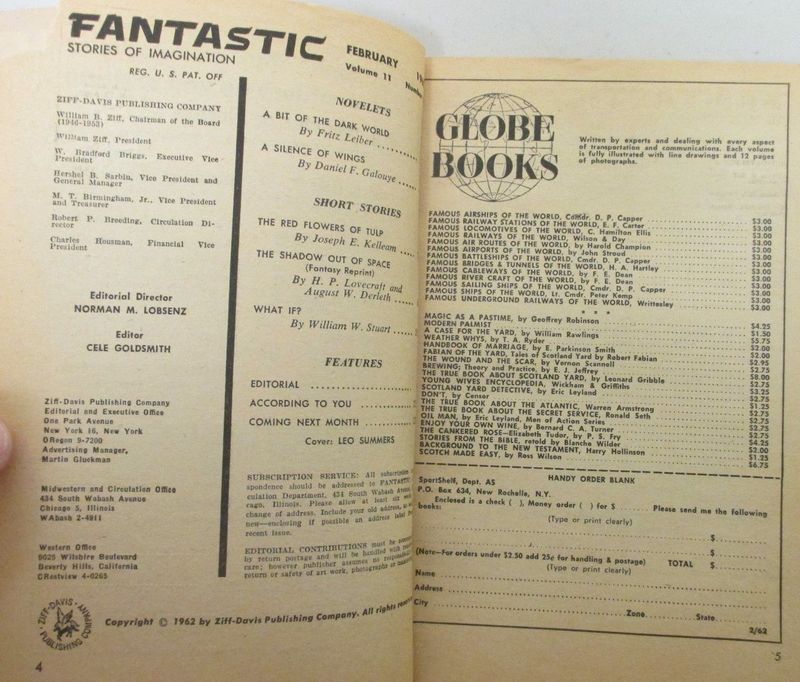 The Leiber novelet is interesting work, pure Leiber, and not bad, but not great either. The narrator and his girlfriend Viki are driving up with their older friend Franz Kinzman to spend a weekend at his house in the hills outside LA. They all see something quite strange on the way in — an intrusion into reality, a sort of spiderlike dark vision. And, at the house, they talk about what they saw, and what it might mean — and Franz hints at other strange manifestations at his house, and much conversation of a somewhat philosophical nature follows, and … well, spoiler perhaps, but either naturally or not, disaster strikes, and a landslide takes the house away. It’s a subtle horror story, and pretty well done. very sophisticated. I did like the portrayal of the narrator’s relationship with Viki — they are sleeping together, but in that time (early ’60s) that was slightly, not exactly scandalous, but not discussed — and Leiber, to my mind one of the most effective portrayers of sexual relationships, makes all that quite sexy without anything explicit. Probably wouldn’t work today. In sum, a fine story, not one of Leiber’s truly great ones, though.

“A Silence of Wings” is a somewhat more typical story, and, like much that appeared in Fantastic in those days, it’s Science Fiction, though with a central idea that is kind of on the Fantasy side. Humans have come to a new world that they want to bring into their interstellar confederation, to be a productive culture. The problem is, the intelligent species on this world, the Soarers, has no interest in productivity. They just fly, and they have enough to eat, and are same from the local predators mostly. The story is told through a Soarer’s POV, and a human’s. The human is depressed at the notion that the peaceful Soarers will have their society disturbed, through this boss’s action. The story turns on the fact that it’s physically impossible for the Soarers to fly — they are humanoid, of fairly normal size, and their wings are fairy-like, gossamer. They fly only because they believe they can, but they are intelligent, so if they are told its impossible, they’ll stop. Which is what happens. (I found that an interesting but multiply implausible notion.) This leads to disaster, for the Soarers but also the humans, and our human hero must come up with a ploy to restore the Soarers’ belief in their powers. I tend to enjoy Galouye’s work, but this is a mixed bag, with elements of interest but not really working.

“The Red Flowers of Tulp” is a pure biter bit story, nicely enough done. Buck Garrett is a nasty man, who, with two confederates, has marooned his fellow spacemen on an asteroid, and taken their ship with the claim to a mine on Ganymede. Back on Mars, they blow some of their money on a sort of carnival exhibit, including the Red Flowers of Tulp, which turn out to be telepathic, and also clairvoyant — they know the evil Buck has done, and they predict his future — immortality. The rest of the story tells how the prophesy is fulfilled, with Buck betraying his fellow criminals (who die just as the flowers predicted), then, on the run from the law, ending up entrapped by a Venusian wasp creature — an unable to die. Nothing new or special here, but nicely enough done.

The author, Joseph E. Kelleam (1913-1975) is a rather little known writer, for sure. He had a few stories very early in Campbell’s era at Astounding (the first of them, “Rust,” later anthologized by Martin Greenberg and Isaac Asimov), followed by one story for Don Wollheim’s Avon Fantasy Reader (issue #6, below), and four pieces for Cele Goldsmith, two of them short novels. There were two other novels in the field, one a 1956 Ace Double half, the other for low end publisher Avalon in 1966. Richard Moore also found a 1948 non-SF novel about the Oklahoma oil boom, Blackjack.

The other new short story this issue is by a likewise little-known writer, William W. Stuart — indeed, a rather less known writer. He published 9 stories between 1960 and 1962 in the field, mostly in Galaxy and If, but two stories for Cele Goldsmith. There was also a 1962 story in Alfred Hitchcock’s Mystery Magazine. I can find nothing else about the writer.

This particular story, however, “What If?,” is a bit of a discovery. I really liked it. The setup is perhaps a bit labored: a colorless young man, a literal Mama’s boy, manages to drive himself to catatonic indecision by considering the endless ramification of the simplest decisions, convincing himself that any decision he makes will lead to disaster, eventually, for someone. So he spends a couple of years in an institution, developing a remarkable ability to sense the consequences of every action around him. Having been cured to the extent of being willing to take action to benefit those he prefers, he becomes wealthy and successful. And then his talent helps him foresee his own futures — and that leads to despair. All this is interesting, and Stuart adds a really neat stinger to the end — for maybe, just maybe, he has actually foreseen (or caused?) the end of the world.

Finally, there is one Fantasy Reprint. This is an August Derleth “completion” of an unfinished H. P. Lovecraft story, “The Shadow Out of Space,” which had previously only been published in an Arkham House collection of Lovecraft works. The problem is, it’s boring and stupid, about a psychoanalyst who treats a man who has hallucinations. Of course, these hallucinations — of being possessed by the minds of an ancient race, and himself being set to work in the library of that race — turn out to be true. I won’t detail the story, which is probably familiar to Lovecraft readers. But it seems to be a feeble reworking of a more important true Lovecraft story, “The Shadow Out of Time.” I can’t blame Fantastic overmuch for publishing it — it probably was of interest to readers at the time, and it was not widely available. But in the end it seems pointless — I suspect (though I don’t know) that Lovecraft’s notes or whatever that Derleth expanded upon were simply part of his preparations to eventually write “The Shadow Out of Time” — so, if true, calling “The Shadow Out of Space” a “completion” of an “unfinished story” would simply be wrong.

Rich Horton’s last Retro Review for us was the October 1968 issue of Galaxy. His website is Strange at Ecbatan. See all of Rich’s retro-reviews here.

I really liked Kellam’s “Hunters Out of Time” (novel title, The Little Men) in the 1959 Amazing. I probably shouldn’t read it again, though.