My most recent forays into Cele Goldsmith Lalli’s editing career have concentrated on Amazing, so here’s a look at a couple of issues of Fantastic. These two issues include a complete John Jakes serial, so I’ll consider them together.

During this period Fantastic was subtitled “Stories of Imagination,” and though it concentrated on fantasy it also published some SF. (The letter column, when one existed, occasionally included complaints about this, to which the response was “sometimes there just isn’t enough good fantasy.”) Fantastic was also thin on features, usually the only one being an editorial from Norman Lobsenz and a brief Coming Next Month blurb. The August editorial is about psychic research, particularly that of the Greek scientist Angelos Tanagras. I thought Lobsenz was a bit too credulous. The September issue’s editorial complains about the quality of SF on TV: instead of adaptations of Isaac Asimov’s robot stories we got Living Doll, and instead of The Martian Chronicles we got My Favorite Martian.

August’s cover is by Ed Emshwiller, with interiors by Emsh, Virgil Finlay, and George Schelling. Robert Adragna does the September cover, and the interiors are by Adragna, Finlay, Emsh, and Schelling. 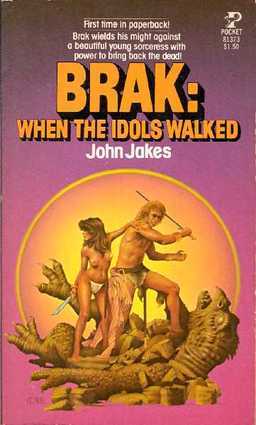 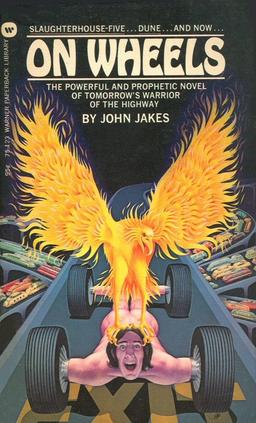 John Jakes (b. 1932 in Chicago) began publishing SF as a teenager in 1950. He labored in the traditional pulp fields (SF, mystery, Westerns) for the next 20+ years, also publishing historical novels as by Jay Scotland, and doing some advertising work. His first SF novels were the Dragonard space opera series beginning in 1967, and his best known SF novel is probably the satirical On Wheels (1973), set in a future where everyone lives in cars that can never go slower than 40 mph. (Read Thomas Parker’s BG review here.)

He was also publishing his Brak the Barbarian fantasy novels, overt Conan derivatives, at about this time (though they began as stories and serials in Fantastic in the early ’60s). But his career took off with the enormous success of his Kent Family Chronicles, historical novels about the Revolutionary War, their release timed to coincide with the Bicentennial. Since then he’s concentrated on historical fiction, with continued success.

To my mind his SF was generally competent but uninspired, though arguably his later work in the field, such as On Wheels, shows signs of growth.

When the Idols Walked is a Brak the Barbarian story, eventually published as a book in 1978. Brak comes as a galley slave for the Gords to a battle against the more peaceful Mirkans, only to escape (barely) when the Gord fleet is vanquished by wizardry. He is rescued by a prosperous man from the city state of Prince Rodar. This city is also being attacked by the Gords, and, while the Prince is away fighting, his slimy vizier and a cheating merchant who hates Brak’s rescuer (because the latter is an upright man) are conspiring to take control. Alas, they have (perhaps unwittingly) got involved with the evil witch Ilona of the Gords. There is an interval in the underground crematoria, there is intrigue against the merchant with whom Brak stays, and finally there is a battle against the invading Gords, involving, yes, huge idols walking. It’s tolerably well told in the sense that the story moves nicely enough and there are some OK fantastical ideas and some OK action. There’s also some downright silliness; and the story suffers terribly if compared to its model, the Conan stories.

The novelet from August, Adam Bradford’s “Land of the Yahoos” wrongly promoted as “Gulliver returns,” is the last of a series of 4 stories in Fantastic which revisit the various lands Gulliver visited in Gulliver’s Travels. The conceit is that Adam Bradford, M. D., discovers during his medical research that Jonathan Swift was actually plagiarizing a real account by Lemuel Gulliver of his actual travel. Bradford manages to find his way to these actual places. “Adam Bradford, M. D.” then, is a pseudonym, for Joseph Wassersug. In this story a plane crash deposits Bradford into the ocean, from whence he fetches up on the land of the “Houyhnhnms,” the noble horse people of Swift’s novel. Bradford learns, to his chagrin, that the Yahoos (humans) have conquered the “Houyhnhnms.” The Yahoos control this island, and when Bradford is forced to live with them he is appalled by their behavior, which is described is broadly satirical terms, taking potshots at fish in a barrel, some that still apply today, some aimed at very early ’60s topical issues. I suppose the story is amusing enough, though shallow.

Larry Eisenberg’s “The Scent of Love” is SF, set on a colony planet menaced by giant insects. A local scientist proposes to use “natural” means to fight off the insects, with unanticipated results. It’s rather slight, and not the author’s best story by any means. Eisenberg, born in 1919 and as far as I know still with us, wrote a few dozen stories between 1962 and 1988, mostly comical, many about an eccentric Physicist named Emmett Duckworth (Eisenberg was a Physicist himself), many in F&SF or Galaxy (though he was a Goldsmith discovery).

David Bunch’s “The Failure” is a Bunch story, more inscrutable than many, about a forlorn quest for the Final Truth.

“Family Portrait” is Morgan Kent’s only story, as far as I know. It’s about a precocious 2-year old, and the joke is the nature of his precocity. Minor, probably worth its thousand words though. 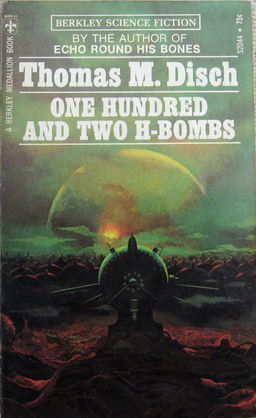 Jack Sharkey’s “Footnote to an Old Story” is amusing enough little piece about a 97-pound weakling who visits a Greek island and falls for a beautiful local girl. Somehow he gets the notion that letting his hair grow will make his body more attractive, and to his surprise it works — soon he’s a pretty impressive physical specimen, and the Greek girl is intrigued. So, it looks like the “Old Story” is the Samson story maybe — but it turns out, in a slick enough conclusion, that it’s another story entirely.

Finally, Disch’s “Dangerous Flags,” subtitled “Another Adventure of the Green Magician,” is early Disch, very satirical but not really to as good effect as he managed at his best. For one thing, the satire is unrelieved by any sympathy for its target, or any understanding — it ends up thumpingly unconvincing. A small town has a problem with Coal Gas seeping into its cellars, and the Green Magician offers a solution. But a nasty teacher objects, and kills the Green Magician — which doesn’t go at all well, for her or for the town.

The story was eventually collected in the 1971 Disch collection, One Hundred and Two H-Bombs.

On to the shorter pieces from the September issue. We begin with the novelette, “Planet of Change,” by J. T. McIntosh, real name James MacGregor (1925-2008), a Scottish writer who published 15 or so novels and something like a hundred shorter pieces in the SF field in a 30 year career beginning in 1950. I’ve read several of his novels, and quite a few short stories (or, mostly, in his case, novelettes), often with a fair amount of enjoyment. “Planet of Change” is the story of the court martial of the leader of a mutiny on a ship that had been ordered to explore a planet from which no previous explorer had returned. The mystery turns on the real identity of the man being court-martialed, and that of course turns on the real nature of the dangerous planet. It’s an OK piece, nothing terribly special.

William Temple’s “Beyond the Line” concerns a lonely and unattractive (or at least she thinks so) woman who encounters a man from another dimension, who thinks she is beautiful. Can she trust him enough to follow him to that dimension? Again, a rather minor story.

“Fire Sale” by Laurence M. Janifer is a deal with the Devil story, with a bit of a twist: the Devil comes to an American General and tells him he’s made a deal with a Russian General — can the American make a better offer? It’s a pretty neatly done, darkly thoughtful piece.

About the Bunch (“A Vision of the King”) once again I have nothing much to say — it’s fairly inscrutable as usual.

Jack Sharkey’s “Hear and Obey” is, like the Janifer story, a variation on a traditional theme, in this case the Genie in the Lamp. This Genie is a bit persnickety about how he grants the wishes, with, as one might expect, unfortunate results for his new owner. A bit strained, I thought.

And, finally, I figured Darryl R. Groupe had to be a pseudonym, and it is, a fairly obvious one for David R. Bunch. Nobody would have been fooled for a second no matter what name was used: “2064, or Thereabouts,” is a clearly a Bunch story, about people who are mostly metal, and paranoid, and one who lets an artist into his stronghold. Weird as one expects.

Rich Horton’s last article for us was The 2016 Hugos: Short Fiction Ballot Thoughts. His website is Strange at Ecbatan. See all of Rich’s retro-reviews here.

I love both the covers.

I once found a website of the worst sci-fi book covers ever. I recognize Jakes’ Wheels from that site. A bit ridiculous.

Concur with you there James. What was the artist thinking.