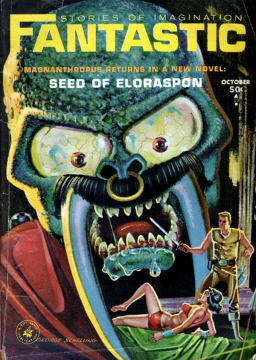 I continue my peregrinations through the Cele Goldsmith Lalli years at Amazing/Fantastic.

This issue features a George Schelling cover. I don’t know if there are Schelling fans out here – but I have to say I found it quite poor, with absurdly stiff human characters, a particularly strange looking female character, a quite inaccurate representation (as to size) of the Tharn antagonist, and also not representing the scene it apparently depicts very well. Other than that… it’s kind of colorful.

(Click on the image at left to get a full-size version).

Curiously, the cover features no author’s name – only the title of the serial, “Seed of Eloraspon,” and the description: “Magnanthropus returns in a new novel.”

The interiors are by Arndt, Schelling (rather better than the cover), Finlay, and Andragna.

The ads are mostly Ziff-Davis house ads, with one full page ad for the Rosicrucians. The editorial, as usual by editorial director Norman M. Lobsenz, is about progress towards a real life version of Donovan’s Brain (and many other stories). The only other feature is a single column on what’s “Coming Next Month.” 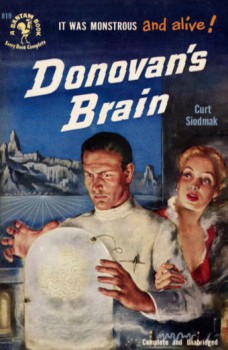 MacApp’s “Beyond the Ebon Wall” begins as if it were SF, with Zeke, of Primary Survey, approaching a very odd planet – or half a planet. It is bisected by a wall, on the other side of which there seems to be nothing. On landing near the wall, he meets a few oddly assorted men, and is told by the oldest of them that he must go through the wall.

Once on the other side, he’s in what seems a code-standard fantasy world, and he is soon enough captured, enslaved, and involved in hunting a dangerous beast intended for a local ruler. It seems this world is part ruled by those who use magic, and part controlled by people who abhor magic. Zeke’s adventures inevitably return him to the Wall, and to a solution to the mystery of the strange group of men he met on first landing.

None of it really matters a whole lot, or makes much sense, but it is for the most part competent adventure writing.

“The Grooves” is a brief horror story in which a young man vows to invade the troll’s cave in the mountains to claim at least some of the rumored treasure there… despite warnings that no one has ever returned, and that “you must never kill a troll, because trolls have inverted souls.” Minor work, but effective enough working out its fairly predictable premise.

Bunch’s “Home to Zero” is not a Moderan story, but it’s certainly a Bunch story, taking on a rather cosmic subject in inimitable Bunch fashion. No point explaining it – it simply needs to be read.

“Encounter” is an early Piers Anthony story set in a world in which nobody goes outside anymore. The hero is a man who does, and who plans to walk across the country. His encounter is with a tiger, and the two of them face off against a pack of wild dogs… before deciding to continue their journey together. A slight piece, but not bad. 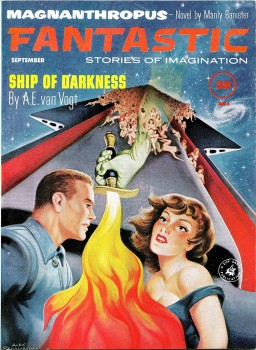 “Midnight in the Mirror World” is on the face of it fairly traditional horror of the sort Leiber did fairly often. A lonely man, set in his ways, notices in two mirrors set across from themselves that one of his multiple reflections seems different – indeed, horribly afraid. And this reflection is accompanied by another person, who becomes clearer as the reflection gets closer, day by day.

Eventually he recognizes the other person as a woman he had been involved with, only to reject, after which she committed suicide… Well, you see where this is going… but Leiber actually takes it just slightly in a different direction. Nice stuff.

Finally, the Manly Banister serial, “Seed of Eloraspon.” As hinted by the cover copy I mentioned before, this is actually a sequel to an earlier Fantastic serial, “Magnanthropus” (September and October 1961; that’s the September issue at left). As far as I can tell from internal clues, in that serial Earth became somehow entangled with a parallel world, Eloraspon, causing catastrophic earthquakes and, apparently, its destruction. Jeff Jarvis, our hero, is one of a small group of humans who escaped to Eloraspon. Jarvis has learned that he is a mutant with special powers, a “Magnanthropus.”

In this story he finds himself marooned on a new continent. He is instinctively searching for the ancient city of Surandanish. But while on the way, after vanquishing such dangers as a six-legged dragon and four-foot long ants, he encounters the beautiful Princess Ilil, and after rescuing her from a spider being of some sort (though she gives a good account of herself – she is a warrior woman) he heads in her company to Surandanish, though she is skeptical of that place.

But instead, Ilil is captured by the evil blue-skinned Tharn. Jarvis obtains the loyalty of a Tharn who was once a normal human, and the two of them head for the Tharn capitol to rescue Ilil – where they are again captured. 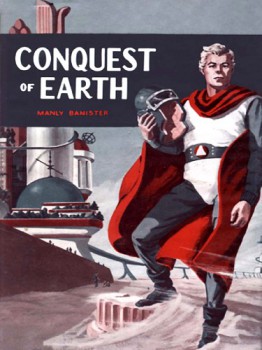 Luckily, Jarvis’s magical powers manifest themselves just when most needed, so he can walk through walls (and rescue another refugee from Earth in the process). What follows is an encounter with the mysterious, supposedly immortal, Dingir, who seem very interested in Jarvis and Ilil, and then the cliffhanger end to this part of the serial, with Ilil in the vile grasp of the Tharn leader…

It is on the one hand very Burroughsian, though Banister’s writing at times seems more interested in aping, almost, Clark Ashton Smith. And again, for what it is, it’s not bad – fairly entertaining if obviously nothing spectacular.

(Fantastic’s presentation is marred by a spot in the middle where a couple manuscript pages must have gotten out of order, and were typeset that way.)

Banister (1914-1986) is perhaps the least known writer in this issue, though his name was not new to me. He published something like a dozen stories in the SF magazines, beginning with “Satan’s Bondage” in Weird Tales in 1942 and ending with this serial.

He published one novel, Conquest of Earth (1957), the book version apparently a significantly cut version of the 1956 four part serial from Amazing, “The Scarlet Saint.”

His other “novels” were “Magnanthropus” and its sequel, “Seed of Eloraspon,” neither of which had a book publication. (A combined publication, presumably about 80,000 words, would seem to make more sense.) He seems to have had some notoriety as a bookbinder. I can’t say why his name seemed familiar to me… possibly a combination of having seen Conquest of Earth in used book stores and conflating his name in my memory with Manly Wade Wellman’s. He was apparently a very well-known fan, especially for his fanzine Nekromanticon.