Game of Cages
By Harry Connolly 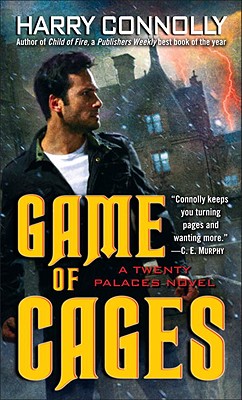 The opening line of Game of Cages, the chronologically third volume in the Twenty Palaces series, is:

“It was three days before Christmas, and I was not in prison.”

How’s that for a back story in a sentence? The truth, Ray Lily thinks, is that he should be in prison, given the actions he took during his battles with supernatural evil in Pacific-coast hamlet Hammer Bay. Ray broke into homes, burned down a brothel, and had a hand in the deaths of several people.

But one of the spells carved into his flesh by Annalise’s magic is the twisted path. His face is difficult to recall, his fingerprints no longer match the ones on file, and his DNA tests are inconclusive.  And so, months after the Hammer Bay incident, he’s a free man, preparing to celebrate his first Christmas since leaving prison.

But the Twenty Palaces society has other plans for him. On that night three days before Christmas, a woman named Catherine finds him at the grocery store. She’s an informer and scout for the society, and collects Ray to help her investigate a rumored auction of a captured magical predator scheduled to take place at an isolated mansion high up in the Cascade Range.

But by the time they arrive, the auction is already over, and the predator has escaped from its buyer, leaving behind a strange plastic cage, an overturned semi-truck, and a trail of circular footprints that suddenly vanish in the snow. Ray and Catherine must race to find the creature before it settles into a feeding ground, and before any of the auction’s other participants find and claim it for their own purposes.

The various parties involved with the auction offer an interesting cross section of the kinds of people who seek magical power in the world of the Twenty Palaces. There’s a Chinese gangster who wants spells and predators to gain dominance in the underworld, an experienced German sorcerer named Zahn, and an Internet club of curious thrill-seekers seeking access to spell books. The three parties display an interesting gradient in the range of people who might become involved in illicit magic. The Internet curiosity seekers are comparatively harmless, acting more out of geeky curiosity and lust for knowledge than any real malice, and only Zahn has any real idea of the powers he’s playing with.

The relative ease with which predators capable of devouring thousands of human lives can be summoned is the wellspring of much of the terror in this book. Early on, Ray witnesses Zahn perform a ritual that involves stabbing a lightning rod through the heart of a living human to summon a floating storm: a sentient ball of destructive energy that hunts with bolts from above and leaves only scorched bones in its wake. Destroying such a monster is horrifyingly difficult, but Zahn demonstrates the ability to call one up almost casually. 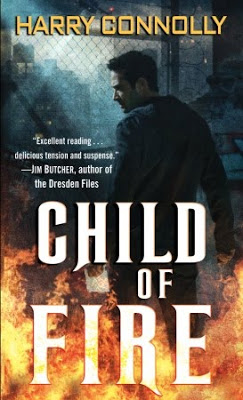 The predator at the story’s heart, the prize placed at auction, is even worse. Connolly has created a monster that, like the burning wheel in Child of Fire, represents a credible threat, not just to individuals or small communities, but to the world at large. No human can look at it without loving it and the love it inspires is the kind of hungry, obsessive love which makes mothers abandon children and spouses murder each other for its attention. And it can never receive enough of that love.

Ray’s deeper understanding of the overwhelming threats the society faces gives him new sympathy for their brutal tactics. One of Ray’s primary motivations is his desire to reform himself, to settle into the kind of law-abiding, good citizen life he’s never really had. But his involvement with the society pushes him towards the opposite side of life, towards acts of violence that, however monstrous, may be necessary to contain the threat of predators from the Empty Spaces.

It’s an effective tension that runs through all of the Twenty Palaces books, and in Game of Cages it reaches a turning point. The men and women he killed or helped kill in Child of Fire (and the prequel volume Twenty Palaces) were all in some way guilty.  But the predator here enthralls and enslaves people who were guilty of nothing but being in its path.

My one serious complaint about Game of Cages is that, when Annalise arrives in the later stages of the book, her relationship with Ray has little continuity with the way we left it in Child of Fire. There, she was grateful to Ray for saving her life, but nowhere close to liking him or even particularly respecting him, and Ray still regarded her as a potential threat to his life. Here, not only is he happy to see her, but starts treating her like an old friend — and she reciprocates. It’s not necessarily an implausible direction for their relationship to take, but none of increased trust is supported by anything we’ve seen, and Ray explicitly mentions that they haven’t seen each other since Hammer Bay.

There’s also the problem that Annalise, while she’s constantly billed as a five-foot dynamo of magical fury, seems to lose every fight she’s involved in throughout all four books. It serves the plot function of making Ray handle his problems on his own, but by the time she’s defeated and nearly killed for the fourth consecutive time, I started to wonder why she’s so respected by the Twenty Palaces society or so feared by Ray — or, in fact, how she ever lived without Ray to pull her out of the fire.

Despite those issues, Game of Cages is another strong entry in the series, with monsters, magic, and intrigue aplenty. We get a few more hints about the nature of magic, the way spellbooks are passed from one generation of sorcerers to the next, and even the ultimate origins of the spellbooks’ presence in the mortal world.

Next up: Circle of Enemies.

[…] moves south from the Pacific northwest hamlets of Child of Fire (my review here) and Game of Cages (review) to the sun-scorched sidewalks and shadowy mansions of Los Angeles, as Ray revisits the life he […]

[…] keep him to ourselves forever, and Harry’s first three novels — Child of Fire, Game of Cages, and Circle of Enemies, together comprising the Twenty Palaces trilogy — were published by […]