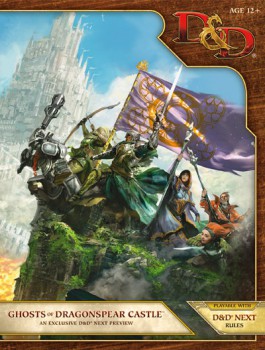 I’m not used to seeing the latest D&D publishing news in Forbes magazine.

I’m not crazy, right? Forbes, the house organ of American capitalism, usually reports on panic-inducing Rolex shortages, fashion trends at Goldman Sachs, and how bubbly can boost brain power. Last time I read an article about role playing in Forbes was way back in… what am I saying. I’ve never read a gaming article in Forbes.

Well, last week there were two of them. Breaking news stories, even. Stuff I didn’t know about the first D&D Next release scheduled to appear at GenCon. Here, look:

A year ago today, Dungeons & Dragons publisher Wizards of the Coast launched a public playtest of a new edition of the classic fantasy role-playing game. Codenamed D&D Next, the rules are an ambitious redesign meant to unify four decades and five editions’ worth of players under one single system – and now fans will get to see them in print for the very first time.

To celebrate the playtest’s anniversary, Wizards of the Coast announced today that it will release a limited-edition commemorative book containing the most up-to-date D&D Next rules. Ghosts of Dragonspear Castle will be available exclusively at Gen Con 2013…

Wizards of the Coast will not say when it plans to will close the playtest and release a final version of the new rules, but many fans expect the game to be released in early to mid 2014, to coincide with the game’s 40th anniversary.

That reads like gaming journalism to me. What’s going on? Wait — the author is Forbes staffer David M. Ewalt, author of the upcoming book Of Dice and Men: The Story of Dungeons & Dragons and the People Who Play It. Is this Ewalt sneaking articles onto the Forbes website while his boss is on vacation? God, I hope so. That would be so cool.

As for Ghosts of Dragonspear Castle itself, it’s real news. Although you have to pre-order it to get a copy — and go to GenCon to pick it up — which probably means I won’t be getting one. It’s being described as more of a keepsake than a core publication (and even has places for owners to sign their copy), so it’s not a must-have. Still, it contains a big four-part adventure and the first publication of the D&D Next playtest rules, which is sure to make it a hot commodity.

Read Ewalt’s complete article here (and his second, “After A Year Playtesting A New Dungeons & Dragons, What’s Next?“), before his boss gets back from Maui and forces him to take them down.

I still play Dnd 3.5 but i have to say this 5th edition really has me looking. I like that they realize they kind of screwed up with 4th ed. and are trying to recapture the olden days.

that is some kick ass art work by the way.

Forbes has become where I get my video gaming news for the last years or so. For a financial magazine, I’m amazed that they cover gaming better than the publication specifically tasked to do so.

[…] promoted the game in the pages of Forbes over the past two years with an early article on D&D Next, and a fascinating piece on the Books that Inspired the New Dungeons & Dragons. This week he […]