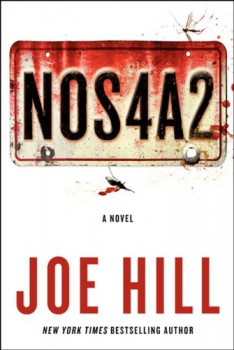 Joseph Hillstrom King, eldest son of Stephen King and better known by his pen name Joe Hill, released his third novel NOS4A2 back on April 30th.  And though I was clutching it possessively in my hot little hands that very same day, I did not to rush to tell you about it.

I was instead preparing to take one for the team.

Hill’s first two outings, Horns and Heart Shaped Box were so amazingly entertaining, so thoroughly well written, and hold such esteemed places in my personal library that I felt there was more than a fair chance that Hill could not maintain this level of performance for a third time. I was prepared to be magnanimous; to assume that pressured by his publisher to stop spending so much time on his comic (Locke and Key) and crank out another best seller, Hill might have caved and produced something along the lines of From a Buick 8.

Never heard of it?

Most people haven’t: that’s because a similar scenario happened to Hill’s dad back in 2002.

So rather than tell you to run out and buy it based on the merit of its two older siblings, I took NOS4A2 home to vet it myself and potentially spend some time figuring out how to tell you not to bother.

Instead today, sixty pages from finishing NOS4A2, I’m not even waiting to see how it all turns out before I tell you yes – bother.  Do it now and without worrying about the sheer size of the thing or how you’re going to find the time.  Get it and curl up somewhere comfortable because you’re not going to be moving much for quite a while.

Admittedly, I’m hedging a bit since I’ve seen more than one compelling story go straight down the pipes in the last couple of chapters.  But I’m betting Hill is going to keep the gas pedal floored right up to the 704th page, with the relentless speed of a vintage Rolls Royce barreling down the Interstate using your soul as fuel.

Before you start thinking that Hill dusted off one of dear old Dad’s ideas and remade Christine, the only thing the stories have in common is a car and frankly due to the subtle mastery of the story telling, I didn’t figure out the bit about the Rolls until quite far in.

So before I go ahead and blow it for you with some unintentional spoilers, best I restrict myself to the publisher’s notes, especially as of the writing of this I still don’t know what ultimately happens.

Victoria McQueen has an uncanny knack for finding things: a misplaced bracelet, a missing photograph, answers to unanswerable questions. When she rides her bicycle over the rickety old covered bridge in the woods near her house, she always emerges in the places she needs to be. Vic doesn’t tell anyone about her unusual ability, because she knows no one will believe her. She has trouble understanding it herself.

Charles Talent Manx has a gift of his own. He likes to take children for rides in his 1938 Rolls-Royce Wraith with the vanity plate NOS4A2. In the Wraith, he and his innocent guests can slip out of the everyday world and onto hidden roads that lead to an astonishing playground of amusements he calls Christmasland. Mile by mile, the journey across the highway of Charlie’s twisted imagination transforms his precious passengers, leaving them as terrifying and unstoppable as their benefactor.

And then comes the day when Vic goes looking for trouble… and finds her way, inevitably, to Charlie.

That was a lifetime ago. Now, the only kid ever to escape Charlie’s unmitigated evil is all grown up and desperate to forget.

But Charlie Manx hasn’t stopped thinking about the exceptional Victoria McQueen. On the road again, he won’t slow down until he’s taken his revenge. He’s after something very special — something Vic can never replace.

The joy of reading a Joe Hill thriller is how tightly the story elements hang together. In the case of NOS4A2, it’s the understated references that augment the breakneck speed of the plot; such as how Charlie Manx bears a striking resemblance to the main character of the 1922 silent film Nosferatu but isn’t an actual vampire and the fan-boy banter laid down by Vic McQueen’s geeky love interest.

NOS4A2 is well worth the 700 plus page investment, but more importantly it cements Joe Hill as formidable master of his craft with the ability to consistently and repeatedly deliver the goods.

However, a Rolls Royce is no longer on the list of things I’d love to own.

Have you read NOS4A2 or any of Joe Hill’s other offerings?  Let us know what you think.  Post a comment or drop a line to sue@blackgate.com.

I’ve been waiting for reviews on this one. Definitely sounds worth it.

Wasp,
I’ve since finished NOS4A2 and I can now report that it did not disappoint. Hill is not afraid to break with convention and as we’ve learned from his prior two novels, he does not hold his characters sacred and untouchable.

NOS4A2 is a wild ride on the “dark road” and I can definitely give this a 5-Bat-Award.

Color me clueless (shocking I know) but I did not until just now get the pronunciation of that title.

So thanks for that and for the review.

(I kept making some sort of nitrous oxide connection, in case you were wondering)

Ironic you should think of nitrous since a similar substance plays a signficant role in the story, so you’re on target.

As for the title, the only reason I got it immediately is that I had applied to have this as my motorcycle plate but it was taken in IL… It would have been more fun to have it dawn on me when it was described in the text anyway.

If you read NOS4A2, let me know what you think.