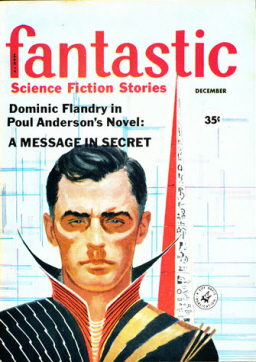 As promised, a return to Cele Goldsmith’s years at Amazing and Fantastic. This issue comes from quite early in her term.

Last time I looked at Fantastic, I noted the subtitle “Stories of Imagination,” and I commented that much of the magazine remained Science Fiction, despite the Fantasy-leaning title and the ambiguous subtitle. This issue, by contrast, is subtitled “Science Fiction Stories” – an apparently deliberate rejection of the fantastical element. Turns out this subtitle had begun only with the September 1959 issue, and it lasted only through September of 1960, being supplanted by “Stories of Imagination” in October.

Interesting is a letter in this December issue from R. D. Miller, stating that with the September issue: “I took one look at the logo and the worst had happened: Fantastic Science Fiction Stories.” The letter in its whole praises the previous Fantastic for being a home to fiction in the Weird Tales tradition, and laments the apparent plan to discard that in favor of “the Science Fiction monster.”

The cover is by Edward Valigursky, illustrating Poul Anderson’s Flandry story “A Message in Secret.” I must say the man on the cover looks nothing at all like my image of Flandry.

Interior illustrations are by Mel Varga and Leo Summers. Interestingly, the cover of the Ace Double edition of “A Message in Secret,” retitled Mayday Orbit, is also by Valigursky – not as good, Flandry in a cold suit so not recognizable, but noticeably the same depiction of the “Prophet’s Tower” on each cover. 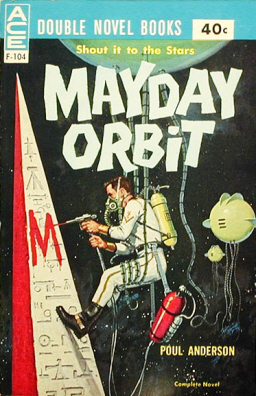 Norman Lobsenz’s editorial, as often for him, discusses a scientific subject, in this case James Van Allen’s caution about the dangers of radiation in space travel. The only other features are a brief “Coming Next Month” paragraph and the letter column, “According to You.”

Besides the R. D. Miller letter I already mentioned, there is one from Dale Randles, ironically saying “the greatest improvement [over the last two years of Fantastic]… has been the transition from s-f to fantasy.”

Mrs. Elaine Fielder asks if the title change means “no more of the weird and macabre?” Here the editorial response reads “… there is a shortage of good fantasy. We will print all we can get, but Fantastic will include some science-fiction.”

Other letters come from Jeff Patton, Billy Joe Plott, Bobby Gene Warner [and yes, both he and Plott were from the South], and Spencer Carlson. 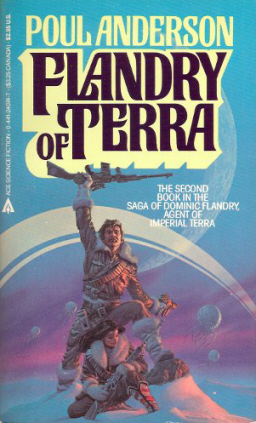 First, what was the SF/Fantasy division in this issue? Five of six stories are SF, so the subtitle certainly fits in this case.

The “novel,” Anderson’s “A Message in Secret,” actually was published in book form as a “novel,” in the 1961 Ace Double Mayday Orbit (backed therein with Kenneth Bulmer’s No Man’s World). I don’t have that Ace Double, so I can’t compare the texts – it may be that the Ace Double version is expanded – if not, it would be one of the shortest Ace Double halves ever (about the same length as Jack Vance’s The Last Castle).

I will say that later reprintings were under the title “A Message in Secret” (as in Flandry of Terra, for example), and they appear to be the length of the Fantastic story, and probably the same text (except perhaps for minor corrections).

The first Flandrys appeared in Planet Stories and Future in the early ’50s, and they were distinctly light stuff, pure interstellar adventure, and quite good of that sort.

But to my eyes in the later ’50s, beginning perhaps with “The Game of Glory” in Venture in 1958, and continuing with three stories for Goldsmith in 1959-1961, Anderson began to deepen his characterization of Flandry and especially his milieu. They were still adventure SF of course, and Flandry still a spectacularly competent hero, but the stories tended to hint at his personal emptiness, and, more overtly to discuss the worthlessness of the Empire.

“A Message in Secret” is set on Altai, an unaligned planet settled by Central Asians, convenient because it’s cold and steppe-like. Flandry comes alone, chasing concerns that the Kha Khan is obtaining weapons from Merseia, obviously with the motivation (on Merseia’s side) of bringing the planet into their sphere of control.

It becomes clear to Flandry that he won’t be allowed to leave with any knowledge he might have gained, and he ends up escaping in the company of a beautiful young woman from a Northern tribe of nomads that stands in opposition to the Khan. It becomes Flandry’s goal to find a way, with the help of the Northern tribe and eventually the mysterious indigenous species, to send a message that will reach Terra, but not raise the suspicions of the Khan (lest he call in his Merseian friends). 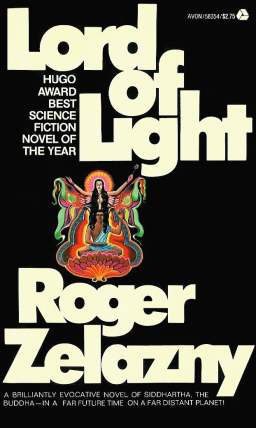 The solution is amusing, if not really that believable (as to its success).  The story is solid fun with just a hint, as I said, of something deeper. The world- and society-building have aspects of interest, though the depiction of adapted Mongolian/Siberian culture is I dare say a bit thin and the world itself is a bit of a monoculture. (Not quite “it was raining on Mongo,” but trending in that direction.)

“The Price of Eggs” is fairly silly SF, not uncommon for Garrett, with a distinct sexual aspect, unusual perhaps in SF of that day.

It is set on a planet occupied by a very humanoid race, which therefore humans decide, magnanimously, not to terraform. They are trying to negotiate a deal for an anti-cancer drug (available from a local plant), when one of the diplomats gets himself involved with a local princess.

The problem is, the local species, for all that they are very humanoid (and the women very pretty), are egg-layers. And not, obviously, interfertile with humans.

The man in question is forced to marry the princess he’s gotten involved with, and if he can’t ensure the succession in a fairly short time, well, he’ll be executed. (Because of course divorce is unthinkable for a royal woman.) A sharp young Lieutenant is given the job of extricating the foolish man, and he comes up with a (reasonably science-fictional) solution.

As I said, it’s kind of silly, and it goes on too long for its (negligible) substance, but it’s entertaining enough anyway. (As I have noted before, the title of the “King” of the alien species here is “Shann,” and Garrett doesn’t miss the opportunity to originate a horrible pun that Roger Zelazny repeated in Lord of Light.) 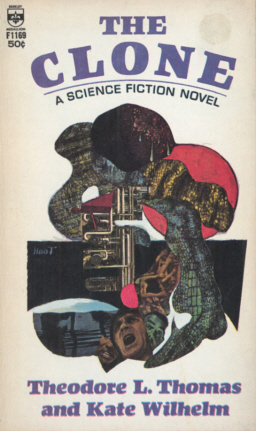 Theodore Thomas’s “The Clone” is a somewhat well-known story, later expanded, with Kate Wilhelm, to a novel of the same title. The title creature is not what we would now think of as a “clone,” but rather a spontaneously generated life form, created in the sewers of a Midwestern city that appears to be Chicago, that feeds on anything it encounters, including people.

It’s pure SF horror (with an obvious ecological theme), and it drives from its open to the necessary dark conclusion, mostly by exposition.

“The Man Who Was Pale,” by Jack Sharkey, tells of a landlady welcoming a strange new tenant – he’s very pale, he’s nocturnal, he wants to live in the basement in a box full of dirt … what could he be? And what could go wrong?

Allen Kim Lang’s “I, Gardener,” is about a certain Dr. Axel Ozoneff, who is found dead, apparently at the hands of his robot gardener. Ozoneff is fantastically prolific – could the gardener have been helping? Silly stuff. Was Asimov the subject of more SF stories transparently about him than any other SF writer?

And Bunch’s “Was She Horrid?” is one of his first stories. He’s an author much associated with Goldsmith, though his first two pieces were in If, in 1957 and 1959. His first story for Goldsmith was in the November 1959 Amazing, followed by this one, a Moderan story, about a half-metal man visited by his daughter, ever suspicious that it’s all a plot by his wife in what seems an unending war.

Strange stuff, the essence of Bunch already from the beginning.