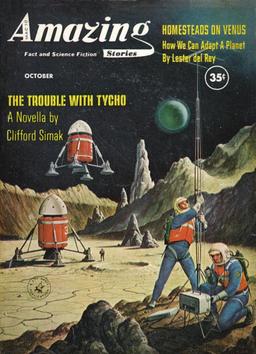 At the 2015 Worldcon, Sasquan, one of the dealers had a nice stash of old magazines. I bought a bunch of Goldsmith-era Amazings and Fantastics. This is one from quite early in Cele Goldsmith’s editorial career. Indeed, Norman Lobsenz’s editorial calls it “the first issue of the “new” Amazing that we have been talking about.”

He adds “There is one problem facing us … the constant shortage of first-rate stories.” This is a point he would make other times in editorials (and in the letter column), to a greater degree than I have ever seen from an editor in the pages of a magazine.

The cover here is by Alex Schomburg. The interiors are by two of the greatest artists in the field’s history, Virgil Finlay and Ed Emshwiller, and a name I didn’t recognize, Bernklau, who seems to have been active in the field only from 1959 to 1961 (in a variety of magazines). He was probably the Art Bernklau who did covers for Beacon Books in the same period.

Besides the editorial, the features include S. E. Cotts’ book review column, the Spectroscope; a science article by Lester Del Rey, “Homesteads on Venus,” and the lettercol, “Or So You Say.”

Cotts opens the book review column be celebrating that the column has more space. There is mention of SF in other media: an article in the National Review (“SF seems a strange bedfellow for such a right-wing magazine” says Cotts – a curious remark), SF on TV (Twilight Zone), on record, and an opera. This last is Harry Martinson’s Aniara (music by Karl-Birger Blomdahl). Martinson eventually (quite controversially) shared a Nobel Prize for literature. 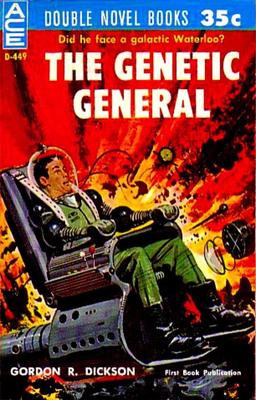 The books considered are Brian Aldiss’ Bow Down to Nul, Wallace West’s Lords of Atlantis, and Gordon Dickson’s first Dorsai book, The Genetic General, plus capsules of a couple of anthologies and a Pohl collection.

Del Rey’s article discusses terraforming Venus (he suggests starting more or less immediately) – not a badly done article but soon hopelessly dated, as Venus turned out to be much different than the scientific consensus as of 1960. I didn’t find much of interest in the letter column – the longest letter complained (not without reason) of an anti-semitic portrayal of a minor character in a J. F. Bone story.

The Simak story is a long novella set on the Moon. Chris Jackson is a prospector, backed by a syndicate in his small home town. He’s getting by, finding some rocks and regularly finding the fungus that grows near Tycho and that can cure mental illness, but he hasn’t had a big strike, and he’s worried that his backers will cut him off. Heading back to his humble home one day he encounters a rig in trouble, and goes to help. It’s a girl, with a secret – her brother found remnants of the lost Second Expedition, lost in Tycho. She want to go there, but her rig is too damaged. Chris agrees to help, for a share of the find, and when he goes back to his place to get equipment he learns that his syndicate has saddled him with an assignment to shepherd an academic … but, coincidentally, he want to go to Tycho as well. The end result isn’t terribly surprising, but it’s nicely enough done. Sound work, not by any means Simak at his best but enjoyable.

The Trouble With Tycho eventually became half of a 1961 Ace Double, paired with A. Bertram Chandler’s Bring Back Yesterday (see our coverage of the Ace edition here.) 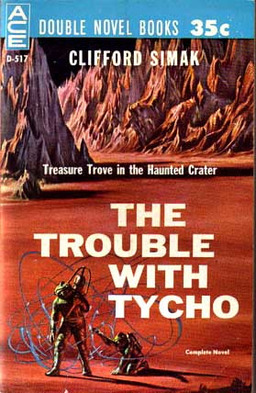 “Seeing Eye” has a pretty cool basic premise. Johnnie Willis is spaceman who has been blinded in an accident. He comes home, but his reunion with his wife is a bit disappointing, and his adaptation to his handicap is not satisfying, so he jumps at the chance of a solution – there’s a planet where local creatures telepathically link to humans to whom they bond, and thus their humans can see through their eyes. The process works fairly well, but Willis eventually realizes that his new “eye” is rather more intelligent than had been advertised, and also is female and that he reacts to her, to an extent, sexually. (The story is pretty frank for a 1960 magazine piece.) Not surprisingly, Willis’ reunion with his wife doesn’t go well… but she has a secret, too, leading inevitably to a bad ending. I don’t think Chandler handled the ending at all well, but until that point it was a neat enough story.

Bone’s “The Missionary” is told by a man on a mission to assassinate the owner of a large island on his home planet. The reason? The rest of the planet is overpopulated. However, he fails and is captured, and the owner, who is somehow able to suppress the narrator’s mysterious powers, spends some time over weeks trying to convince him he – and his society, and their religion – are wrong. The religion in question is a cod-standard SF authoritative religion. The other man’s bugaboo is overpopulation – a continuing problem over man’s history, even throughout the galaxy. The question, I suppose, is who is the missionary here? The end result it mostly predictable. A minor piece.

Finally, “The Sound of Screaming” is one of those stories I think of as a “Prime Directive” story. Smithey is a nearly hopeless drunk, but also the best planetary surveyor around. We see him dumped on a new planet, and learn the reason for his attitude – his wife was killed by aliens on a previous mission – she save a child of theirs from drowning, and that violated a taboo. Inevitably, on this mission he encounters aliens behaving badly again, and is faced with the choice of violating the “Prime Directive” (not called that, of course), or of interfering and saving the alien in trouble (a woman being beaten, in this case). Again, a minor story, mainly because it doesn’t really take on its main issue with any subtlety.

Rich Horton’s last Retro Review for us was June 1965 issue of Fantastic. See all of Rich’s retro-reviews here.

Thanks! I enjoy the reviews of the Cele Goldsmith-era issues of Fantastic (especially) and Amazing.

Thanks, Major … I’ll have a Fantastic review coming up real soon now.

And thanks for tracking down the TROUBLE WITH TYCHO Ace Double, John!