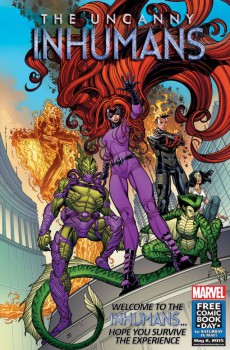 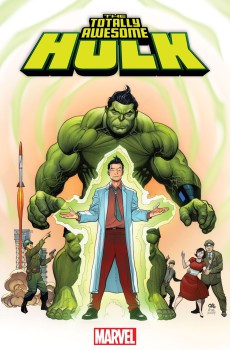 They had Doom as the overboss of a patchwork of different zones, each one a little different, but giving Marvel plenty of space to do what they felt like. So they had the Thor Corps of cops working across all places for Doom (along with Doom’s advisor Stephen Strange).

They had A-Force, an all-female Avengers led by She-Hulk. And on and on it went, in a way that was much better than DC’s “destroy the universe and reboot it”, which I felt was resolved so unsatisfyingly that the name of the crisis escapes me right now. 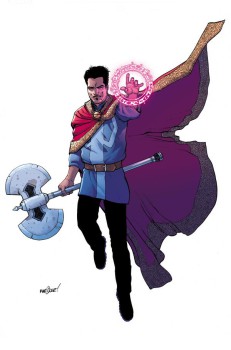 So over the last few months, Marvel has been emerging from Secret Wars with a whole new pack of #1 issues in their All-New All-Different line.

We’ve got a place of prominence for the Inhumans, taking over the prominence formerly held by the X-Men. We’ve got a new Dr. Strange comic to psyche up some fans for the movie (written with tongue-in-cheek by Jason Aaron).

To cover the movies, we’ve got no end to Guardians of the Galaxy, Groot, Iron Man, Avengers, Ant-Man, Captain America or Captain Marvel, which bodes well for what Marvel seems to be trying to do in sustaining interest in the movie properties while prepping others for the limelight.

Some All-New All-Different choices are unexpected. Venom (Flash Thompson) is a space knight. The Black Knight has a series, as does Squadron Supreme, and Scarlet Witch is a mystical noir series that seems to be a cross between Cullen Bunn’s Magneto and Hellstrom. 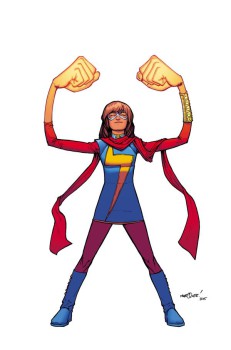 But most striking to me, although I’m not the target audience, is the amount of young adult or all-ages series that are out there. When I was a kid you went to DC for kids stuff and Marvel for teen-targeted books.

But the slate of YA-toned comics runs from Moon Girl and Devil Dinosaur, Ms. Marvel, Hellcat, the Unbeatable Squirrel-Girl, Spider-Gwen, Spidey, Nova, Groot, some of the Guardians stuff, and depending on how you read them, the Totally Awesome Hulk and Silver Surfer.

While it’s not the tone I gravitate to for myself, I read the first issue of Nova with my 10-year old son, as well as the first two issues of Squirrel-Girl, and it was great father-son bonding. 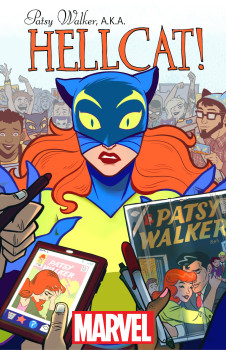 Now, this post is not just about the comics and what’s on offer per se. A larger theme is playing itself out as well, a positive one. Nowhere in Marvel’s offerings do I find a whole lot of cleavage or enthusiatically-drawn skin-tight outfits as I would have even just five years ago. I’d always wondered how I would share my love of comics if I’d ever had a daughter.

That question ought not come up to anyone anymore. Hellcat and She-Hulk and many other female heroes are being written, drawn and edited by women, in respectful ways.

The Black Panther will soon launch, written by the columnist for The Atlantic, Ta-Nehisi Coates. Editor Sana Amanat has taken on a new role in Marvel to expand and diversify the line to attract new audiences. 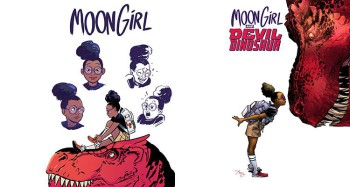 We’ve seen some push-back from some fans, but overwhelmingly, the majority of fans are embracing the changes, myself among them, as well as legions of new fans who are bringing new money to the table.

Comics are transforming, in the same way that the sci-fi and fantasy and horror fields are changing, and gaming is changing. The future is here and it’s diverse, and new perspectives are making comics far more interesting than they were before.

You should check some of these out, maybe with your kids.

Derek Kunsken writes science fiction, fantasy and horror in Gatineau, Quebec. His next story is appearing in the Apr/May 2016 issue of Asimov’s (on stands at the end of January).

One issue I have with reboots is the desire some comics have to replace the character, to make him a different person.

I don’t get attached to superheroes, I get attached to characters.They have personalities and histories and flaws that interest me and drive me to find out more. You can’t just take a superhero’s suite of powers and give it to a new person entirely and call him by the old name. Well, you can, but it doesn’t work for me.

Reboots where they keep the essentials of the character don’t bother me as much, but where they replace the character entirely with a new one, you really have to win me over again from the beginning (and deal with the fact that I’m probably missing the old one). You can’t expect me to carry over my love for one character to an entirely different one because he has the same powers and superhero name.

DC/Marvel comics aren’t transforming – the numbers say they are dying. The constant reboots in the books are absurd. The book market continues to shrink as the constant agenda-driven changes alienate much of the older fan base while failing to attract new customers in sufficient numbers. Movies are the only thing keeping Marvel/DC around.

Hey Donald! I totally get what you’re saying and I’m sometimes mourning people. That being said, the replacement of Bruce Wayne with Dick Grayson for a few years was one of my favourite Batman times. By the same token, the replacement of Steve Rogers with Sam Wilson is (in my view) strategically brilliant. There are stories about racism in America and gotcha news cycles that can only be told with a black Captain America. Some of Cap:Sam Wilson I read was squirm-inducing, not because the story-telling was bad, but because the story was commenting too powerfully on American (and Canadian) society of right now. Timely and well-played by Marvel, I think.

Hey Tyr! The numbers are dying in many cases, but that’s not to my mind a storytelling problem. Comics (like all magazines) have been getting squeezed for decades until most of the time you can only find comics in comic book shops. There are no more impulse buys and most corner stores because the distribution is too difficult. I would also argue price is one of the factors that keeps me from getting back into comics as much as I would want. As far as agenda-driven changes, I’m not sure I see things that way. I’m a 44-yr old white guy. I don’t buy that many comics anymore. But Marvel had to do something like *seven* reprintings of Ms. Marvel (the female teen American-Pakistani superhero) because it was so popular with a brand new people (girls and boys) who are bringing new money to the table. I can turn to a bunch of podcasts to hear women readers effuse about Ms. Marvel, Captain Marvel, the female Thor, Black Widow, Medusa, etc, and those podcasts are driving in even more new customers. Just as an example on this, I mentioned Ms. Marvel to a friend at a dinner party yesterday and she immediately said she’d like to pick it up, based on nothing more than the tag-line. People like me will not keep this industry alive. But 10,000 new female teen readers will certainly stave off bankruptcy for a while.

Ms. Marvel is a good example of why you are wrong. The initial enthusiasm crashed and the last issues of that run sold very few copies. Last month, however, the comic had good sales because, yes, you guessed it, they rebooted with another issue #1!!!

Diversity doesn’t sell comics as much as the white, liberal dinner party thinks it does, once the gimmick phase is over, particularly when you replace an existing character. But an Issue #1 almost always gives a nice little pump…..expect the new, new, new Marvel Universe in about 24 months to temporarily slow the downtrend. In the meantime, we can hope that more talent like Frank Miller appears on the scene to replace the hacks and activists who currently dominate the comic industry.

Marvel’s held the lead in “Tokenism” but they’ve always kept it to dabbling. Sometimes – such as when handed to a super writer – it becomes genre changing – Daredevil, btw… Most of the time the token characters fade away.

My impression of that is “Shoot self in foot” – more or less like the paperback industry did by forcing P.C. decades back. However, Marvel is making tons of money off its movies and other products so they can handle sucky sales – much as the publishing industry got spoon fed tax breaks by the Govern-NOT. Lots of little guys lost it all but the giant CEO’s still get next year’s latest yacht if they want it.

But I do argue it’s “Shoot self in foot” – if you have a favorite character and the prime customer base is a white male, well I’d say changing that is more liable to lose/alienate more readers/buyers than bring in.

I like Ms Marvel btw, IMO though the original was a “Tooken” character (woman superhero) to begin with so the new one isn’t bad – problem is she’s in the middle of the crisis on multiple plot lines so hard to develop a good ongoing good story.

On the subject of Ms. Marvel, she’s continuing to get a lot of press. Here’s Sana Amanat, one of her creators in interview (http://www.makers.com/blog/be-the-hero-sana-amanat) and an announcement about her being on Late Night With Seth Meyers (http://www.comicbookresources.com/article/marvel-comics-sana-amanat-appearing-on-late-night-with-seth-meyers).

Here’s the link to her interview on Late Night: https://www.youtube.com/watch?v=RpGuvOPx-N4.