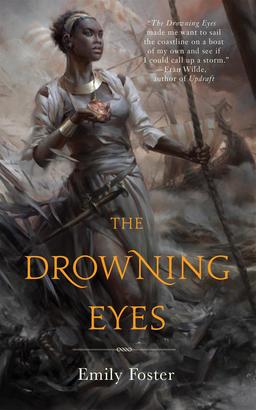 Tor.com‘s new lines of novellas was one of the biggest publishing stories of last year. Launched in September 2015 with Kai Ashante Wilson’s highly-regarded The Sorcerer of the Wildeeps, Tor.com released a novella every week for ten weeks, including titles by Paul Cornell, Nnedi Okorafor, and K. J. Parker.

With the arrival of the new year, Tor.com kicks off another ambitious publishing round with The Drowning Eyes, the debut release from Emily Foster, a “magic- and wind-filled adventure, peopled with excellent and strong characters” (Fran Wilde) in which apprentice Windspeaker Shina must return her people’s power to them before the Dragon Ships destroy everything.

When the Dragon Ships began to tear through the trade lanes and ravage coastal towns, the hopes of the arichipelago turned to the Windspeakers on Tash. The solemn weather-shapers with their eyes of stone can steal the breeze from raiders’ sails and save the islands from their wrath. But the Windspeakers’ magic has been stolen, and only their young apprentice Shina can bring their power back and save her people.

Tazir has seen more than her share of storms and pirates in her many years as captain, and she’s not much interested in getting involved in the affairs of Windspeakers and Dragon Ships. Shina’s caught her eye, but that might not be enough to convince the grizzled sailor to risk her ship, her crew, and her neck.