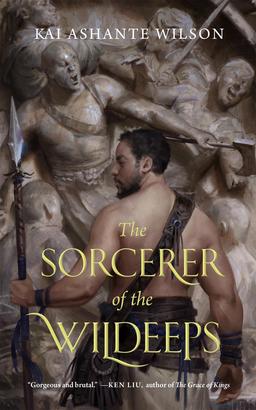 Tor has brought us some strong debuts over the past 18 months. Seth Dickinson’s The Traitor Baru Cormorant, Marc Turner’s When the Heavens Fall, and Rjurik Davidson’s Unwrapped Sky have all made waves, and I expect to see great things from them in the future. It’s great to see a publisher with such a keen eye for new talent.

Tor’s latest find, Kai Ashante Wilson, releases his first fantasy novel next month: The Sorcerer of the Wildeeps, and it looks like one of their strongest discoveries yet. It’s a sword & sorcery tale of gods and mortals, magic and steel, and life and death that Ken Liu calls “Lyrical and polyphonous, gorgeous and brutal.”

Since leaving his homeland, the earthbound demigod Demane has been labeled a sorcerer. With his ancestors’ artifacts in hand, the Sorcerer follows the Captain, a beautiful man with song for a voice and hair that drinks the sunlight.

The two of them are the descendants of the gods who abandoned the Earth for Heaven, and they will need all the gifts those divine ancestors left to them to keep their caravan brothers alive.

The one safe road between the northern oasis and southern kingdom is stalked by a necromantic terror. Demane may have to master his wild powers and trade humanity for godhood if he is to keep his brothers and his beloved captain alive.

Wilson has published several popular stories which you can read free at Tor.com, including “The Devil in America” and “Super Bass.” Read an excerpt from The Sorcerer of the Wildeeps here.

I’ll think about it.

[…] two days ago, in my Monday post on the fantasy debut The Sorcerer of the Wildeeps, I noted that Tor has brought us some strong debuts over the past 18 months. And now here’s […]