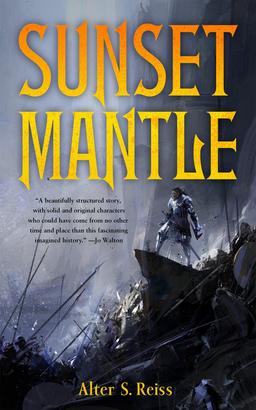 I’ve really been impressed with what I’ve seen of Tor.com’s new line of novellas. There are ten on the schedule, from a diverse range of exciting authors — including Nnedi Okorafor, K. J. Parker, Daniel Polansky, and Michael R. Underwood — and they look terrific.

The first to go on sale will be Kai Ashante Wilson’s debut, The Sorcerer of the Wildeeps, and Tor.com will publish roughly one a week through most of the fall. September 15th sees Alter S. Reiss’ Sunset Mantle, the tale of an exiled warrior, and a doomed settlement called the Reach Antach…

With a single blow, Cete won both honor and exile from his last commander. Since then he has wandered, looking for a place to call home. The distant holdings of the Reach Antach offer shelter, but that promise has a price.

The Reach Antach is doomed.

Barbarians, traitors, and scheming investors conspire to destroy the burgeoning settlement. A wise man would move on, but Cete has found reason to stay. A blind weaver-woman and the beautiful sunset mantle lure the warrior to wager everything he has left on one final chance to turn back the hungry tides of war.

Sunset Mantle will be published by Tor.com on September 15, 2015. It is 192 pages, priced at $12.99 in trade paperback, and just $2.99 for the digital version. The cover is by Richard Anderson. Read a generous excerpt at Tor.com.