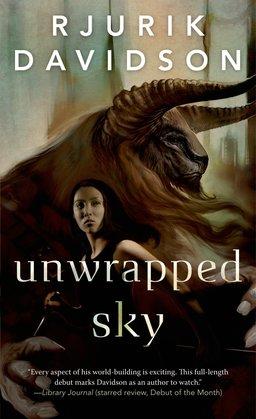 When Unwrapped Sky, the debut fantasy novel by Australian writer Rjurik Davidson, appeared in hardcover last April, it got solid reviews for its innovative world building and original setting. Locus praised its “tough urban setting, influenced by noir mysteries as well as steampunk,” and Hannu Rajaniemi, author of The Quantum Thief, called it “Brilliant… Caeli-Amur is one of the more memorable cities in recent fantasy.”

Rjurik Davidson is already being acclaimed as a young master of the New Weird. Unwrapped Sky arrived in paperback earlier this month, and I picked up a copy as soon as I saw it. This looks like the kind of book I could lose myself in.

A hundred years ago, the Minotaurs saved Caeli-Amur from conquest. Now, three very different people may hold the keys to the city’s survival.

Once, it is said, gods used magic to create reality, with powers that defied explanation. But the magic — or science, if one believes those who try to master the dangers of thaumaturgy — now seems more like a dream. Industrial workers for House Technis, farmers for House Arbor, and fisher folk of House Marin eke out a living and hope for a better future. But the philosopher-assassin Kata plots a betrayal that will cost the lives of godlike Minotaurs; the ambitious bureaucrat Boris Autec rises through the ranks as his private life turns to ashes; and the idealistic seditionist Maximilian hatches a mad plot to unlock the vaunted secrets of the Great Library of Caeli-Enas, drowned in the fabled city at the bottom of the sea, its strangeness visible from the skies above.

In a novel of startling originality and riveting suspense, these three people, reflecting all the hopes and dreams of the ancient city, risk everything for a future that they can create only by throwing off the shackles of tradition and superstition, as their destinies collide at ground zero of a conflagration that will transform the world… or destroy it.

Unwrapped Sky was published by Tor on March 3, 2015. It is 516 pages, priced at $8.99 for both the paperback and digital editions. The cover art is by Allen Williams.

Snap! I’m instantly interested. This author is completely new to me, but the cover art, the description, and the blurbs — taken all together — point to something special and wonderful. ON MY LIST!

Thanks for the heads-up, John!

What good are we if we can’t point out intriguing new fantasy?

Let us know what you think, Mr. Fultz!