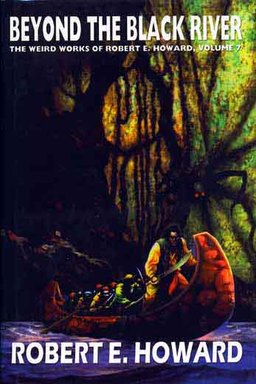 Howard Andrew Jones and Bill Ward continue their re-read of The Conquering Sword of Conan by Robert E. Howard, the third omnibus volume collecting the complete tales of Conan, with “one of the most famous Conan stories of all,” and one of the last, “Beyond the Black River.” It was originally published in in the May-June 1935 issue of Weird Tales.

“Barbarism is the natural state of mankind,” the borderer said, still starring somberly at the Cimmerian. “Civilization is unnatural. It is the whim of circumstance. And barbarism must ultimately triumph.”

Bill: So concludes “Beyond the Black River,” a story that might almost be REH’s thesis on his philosophy of civilization. It is a story that introduces new elements to Conan’s world, demonstrating again how flexible and expandable REH’s Hyborian blueprint was even after sixteen complete short (and not so short) stories and a novel. But it also maintains a continuity with what has come before, giving us perilous adventure with supernatural antagonists and, of course, Conan being Conan.

Howard: I think it builds nicely on what we’ve seen before. As it happens, though, it’s not exactly a great introduction to Conan himself, or even the Hyborian Age… It’s very different from the preceding Conan stories, feeling very much like a tale of Indian warfare, and Conan himself, while busy doing incredible things, is almost a secondary character.

Towards first comment resonated with me. This is quite a different Conan story and definitely one of my top 5. I quite enjoyed the change of pace where Conan is not the primary focus. Somehow it makes the world more believable, knowing other people are also out there doing heroic things.