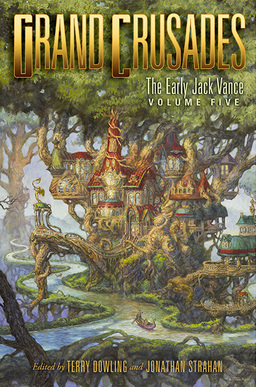 Subterranean Press is now accepting pre-orders on the fifth volume of their landmark series The Early Jack Vance.

New titles in the series are released every March. I covered Volume Two, Dream Castles, after I unexpectedly found a copy in the Dealer’s Room at Capricon 33 in 2013, and I reported on Volume Three, Magic Highways, last March.

Volume Five is by far the largest so far (at 472 pages); I was also surprised to see that it contains only five stories, all short novels, most published in pulp magazines between 1950 and 1954.

This volume also contains a new introduction by the editors.

The first four books in The Early Jack Vance were a treasure trove for collectors, as they contained Vance stories that have been out of print for decades — and many that have never been reprinted. In contrast, this volume contains four short novels that have appeared in a handful of paperback editions over the decades (and under multiple titles), and one that has never been reprinted. This is first time they’ve been collected under one cover and the first time any have been in print for at least 30 years. I’ve selected a dozen covers from earlier printings below.

Under the title The Five Gold Bands, it was reprinted in 1963 as an Ace Double (paired with Vance’s Hugo Award-winning novella The Dragon Masters), and again in 1980 by DAW.

Crusade to Maxus was originally published in Thrilling Wonder Stories, in February 1951. As far as I know, it has never been reprinted. Gold and Iron first appeared in Space Stories, December 1952, under the title Plant of the Damned. It was reprinted twice, first an Ace Double under the title Slaves of the Klau (paired with Vance’s popular novel Big Planet), and in hardcover by Underwood Miller in 1982 (not shown.)

The Houses of Iszm was originally published in the Spring 1954 issue of Startling Stories (below left), where it was illustrated by the great Virgil Finlay (right).

It was reprinted twice, both times as an Ace Double, and both times paired with Jack Vance’s Son of the Tree. First in 1964 (below left), and again in 1971 (right).

Space Opera was published as an original paperback by Pyramid Books in 1965. It was reprinted once, in 1979, by DAW Books.

Grand Crusades: The Early Jack Vance, Volume Five will be published by Subterranean Press on March 31, 2015. It is 472 pages, priced at $46 in a deluxe hardcover edition limited to 1,000 copies. The cover is by Tom Kidd. There is no digital edition, and no planned paperback edition; copies of Volumes 1-3 are already sold out, and used copies of the first volume start at $250 at Amazon.com. Order directly from the Subterranean Press website.

[…] middle pic above, cover by Ed Emshwiller), where it was paired with Vance’s 1952 novel Slaves of the Klau. But there’s a problem with this one, too — it’s substantially cut. Magazine […]

[…] I’ve been exploring the work of Jack Vance recently, inspired by the beautiful volumes from Subterranean Press collecting his earliest short stories, The Early Jack Vance. Five volumes have been released so far, and more are on the way. We covered the latest, Grand Crusade, here. […]