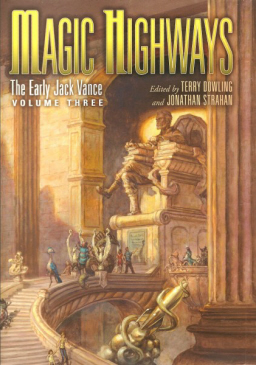 Last February, I wrote about how excited I was to find a copy of Dream Castles: The Early Jack Vance, Volume Two in the Dealer’s Room at Capricon. I had purchased Volume One,

When I wrote enthusiastically about Dream Castles last year, I said:

Jack Vance, who at 96 years old is still with us, is one of the last remaining writers from the Golden Age of Science Fiction (the only other one I can think of is Fred Pohl). He is the author of some of the most celebrated SF and fantasy of the 20th Century, including “The Dragon Masters,” “The Last Castle,” and The Dying Earth novels.

Jack Vance died on May 26th of last year, and Frederik Pohl passed away less than four months later, robbing us of two of our genre’s brightest lights.

Still, their words are still with us — and what words they are. I have no idea how many volumes are projected in The Early Jack Vance (Volume Four, Minding the Stars, is scheduled to be released this month), but every one is a delight.

Part of that is the gorgeous covers by Tom Kidd; part is the high quality production and design from publisher Subterranean, and of course part of it is simply finally having the early pulp fiction of one of the greatest fantasy writers of the 20th Century collected for the first time.

They are expensive, though. The hardcovers are priced at $45 new (and God help you if you’re trying to track down the out-of-print volumes). Subterranean prints only a limited number and once they’re gone, they’re gone.

Fantasy and Science Fiction Grandmaster Jack Vance is very much a writer of the Space Age. His time ‘traveling’ the magic highways of his imagination spans the period bracketed by the final years of World War 2 and the Cassini Huygens probe reaching Saturn space in late 2004, the year he brought his magnificent career to a close.

In those first thrilling, dangerous, heady days, science did seem to promise all the answers, and it was in a ‘double’ universe of the familiar workaday world and the utterly unlimited one of the imagination that the ever-practical yet romantic, diligently physics-savvy yet as often wildly improvisational Jack Vance worked.

Even as he wrote tales set in the far future of his acclaimed Dying Earth, even as he produced mysteries and suspense stories of a much less fanciful kind, Jack s determined quest to become a ‘million words a year’ man saw him ranging a universe criss-crossed with busy interstellar highways: a network of flourishing trade and tourist routes leading to new frontiers, far-flung colonies, alien worlds, with ample room for exotic races, travelers, traders and scoundrels, even space pirates, ample opportunity for grand schemes of every kind.

Magic Highways gathers sixteen of those early space adventures from that exciting first decade, spanning the years 1946 to 1956. In these frequently inventive, often surprising space operas, Jack takes us to vivid destinations along the vast interstellar highways of a future where anything is possible.

And here’s the complete Table of Contents, all stories published between 1946 and 1957 — including no less than seven Magnus Ridolph tales, and a new intro by the editors.

Magic Highways: The Early Jack Vance, Volume 3 was published by Subterranean Press on March 31, 2013. It is 333 pages in deluxe hardcover, priced at $45. There is no digital edition.

Let us know what you think! I haven’t had time to crack open my copy yet.