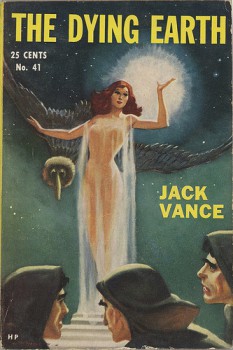 Jack Vance, one of the greatest fantasists of the 20th Century and one of the last living links to the pulp era, died Sunday at the age of 96.

Vance was an electrician in the naval shipyards at Pearl Harbor in 1941, working for 56 cents an hour. He left a month before the Japanese attack; during World War II, he was in the Merchant Marines.

His first published story, “The World-Thinker” in the Summer 1945 issue of Thrilling Wonder Stories, was written at sea. Over the next six decades, he wrote more than 60 books (and perhaps as many as 90).

Vance won his first Hugo Award for the brilliant novella “The Dragon Masters” (Galaxy, 1962); “The Last Castle” (Galaxy, 1966) won both the Hugo and Nebula Award.

During this period, he also wrote most of the stories that were collected as The Dying Earth in 1950. Famously, Vance was unable to sell his collection to genre publishers, as a result one of the most important works of American fantasy was published by tiny Hillman Periodicals, who chiefly published comics.

The original paperback edition of The Dying Earth is highly prized by collectors today.

Vance was an early master of series SF and fantasy. In addition to The Dying Earth (four books), his most famous series include Lyonesse (3), The Demon Princes (5), The Cadwal Chronicles (3), Alastor (3), the four Planet of Adventure novels, and others. 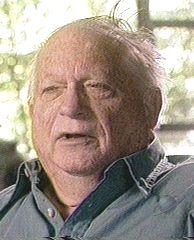 He also won the SFWA Grand Master Award in 1997, and was inducted into the Science Fiction Hall of Fame in 2001. His 2009 autobiography, This Is Me, Jack Vance!, won the Hugo for Best Related Book.

Subterranean Press has published three volumes of The Early Jack Vance (so far), including Dream Castles. And one of my favorite role playing games, the Dying Earth RPG, was published by Pelgrane Press in 2001.

Jack Vance died on Sunday, May 26, at the age of 96 at his home in Oakland, California.

He will be sorely missed. I started reading a collection with The Moon Moth in it last night; brilliant stuff.

That’s a great link! I just may have to buy that jazz album.

I listened to THE DYING EARTH a few years ago, when I was commuting three hours to Champaign every week. That book kept me company through many lonely hours on the prairie in Illinois…

The guy was a legend. Chun the Unavoidable FTW.

Sad to hear this, even if Vance was a bajillion years old. He was, and still is, one of my favorite authors. My SFBC omnibus of the Dying Earth stories is a treasured possession. I always loved his style of writing. Nobody wrote a yarn like Vance did. Hopefully someone is already scouring his computer for unpublished works.

[…] Sunday, May 26, veteran genre writer Jack Vance died at the age of 96. John O’Neill posted a fine overview here of his career; testament to Vance’s influence on other writers can be seen in remembrances by […]

> Hopefully someone is already scouring his computer for unpublished works.

I find it starting that no one knows for sure how many books Vance wrote.

Sure, pulp writers were notorious for writing under multiple pseudonyms, and many (like Vance) wrote in mutliple genres. But how can the official Wikipedia account of his body of work state “he has written more than 60 books — perhaps almost 90.” That’s as many as 30 unknown novels!

So no need to imagine literary discoveries lurking on his hard drive… there may be dozens of published Vance novels out there to be discovered and cataloged. 🙂

[…] examples? As I mentioned in Jack Vance’s obituary last week, the first edition of The Dying Earth is one of the rarest and most sought-after genre paperbacks […]

[…] Vance died on May 26th of last year, and Frederik Pohl passed away less than four months later, robbing us of […]