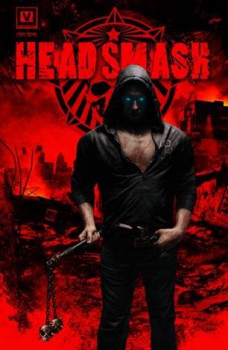 At this year’s Chicago Comic and Entertainment Expo (“C2E2”), you couldn’t spit a piece of gum without hitting a promotional plug for Head Smash.

To be honest, you couldn’t spit a piece of gum without hitting a lot of unusual things at the May event, but Black Gate photog Chris Z and I couldn’t help but notice that the sheer quantity of Head Smash promotion was on par with the visual assault launched by Marvel for its own upcoming releases.

We had to admit, the curiosity factor was being driven off the scale for a graphic novel that hadn’t yet been released — not to mention an indy film adaptation barely into pre-production.

I had read that Yudin was creating Head Smash (penned by Erik Hendrix and illustrated by Dwayne Harris) for Arcana Comics, as well as writing the film adaptation of the story.  He is also producing and adapting the film’s screenplay with The Twilight Saga producers Mark Morgan and Michael Beckor.

So thanks partially to our nosiness–  but mostly to the tenacity of the PR company handling Head Smash and its creator — Chris and I got an early morning exclusive chat with the Russian-born-US-raised writer, director and producer Vlad Yudin.

And yes, I admit it, there’s no way I’m not going to talk to a guy named “Vlad…”

An Interview with Vlad Yudin

Conducted by Sue Granquist, May 2013 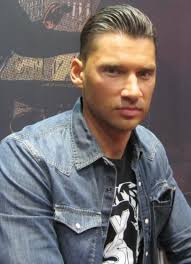 GC: Tell us about Head Smash.

VY: Smash is an orphan. All of his life he is just fighting for survival.  The orphanage, where he grew up, is more like a prison where kids gets tortured by the guards. It is a very dark environment. One day he gets saved by Maurice, who is a flamboyant character and a gangster who runs The Horde, which is a brutal syndicate in the city of Ares.  Maurice becomes his father figure and mentor that Smash has never had in his entire life. The Horde becomes his family. One day he gets sent on a mission and he gets betrayed.  He survives and takes a special serum that makes him really powerful and strong. He goes back to the city of Ares and he is looking for answers.  That is when the big story unravels. Why did this happen and what is going on? His pregnant wife is kidnapped by Maurice.  He is looking for his future son. That is the puzzle he is trying to unravel.

How is it you decided to name your guy “Smash?”

It’s his nickname. He grows up in an orphanage, and there, you have to survive to make it out of there. He’s known for his aggression from an early age. He’s known for basically smashing people’s heads in. He’s got a lot of strength in him. He doesn’t talk too much, necessarily, but when he’s pushed into a corner, he knows how to fight back in a major way. A big part of the story is a special serum that Smash discovers which gives him superhuman strength. He already has a lot of fighting knowledge, but the serum lets him fight a lot of people at the same time – but it has side effects. It’s a gift and a curse. It gives him that superhuman ability to fight and defend himself but, like any drug would, it’s giving him hallucinations or it’s really deteriorating him at the same time.

Will Head Smash be an ongoing series?

Well, there’s definitely potential for an ongoing series, and that’s exactly what we’re contemplating right now. I feel like there is definitely a trilogy here and that’s what we’re going for, but right now we’re focusing on specifically the (first) graphic novel. 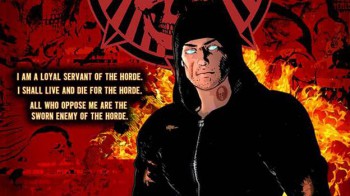 When can readers expect Head Smash on the book selves?

July 31st. On July 31st, it will be everywhere: comic shops, online, and all the book stores including Barnes and Noble.  It is a wide release which is not common for a graphic novel.

Neither is getting a movie going so quickly, which is an amazing endorsement.  I understand you are creating the Head Smash graphic novel at the same time you’re developing the film.  Does the graphic novel automatically become the script?

Basically, I came up with the concept for a story, and together with Erik Hendrix and Dwayne Harris, we are working on a comic book. The idea unfolded like a film already, so at the same time, I’m creating a screenplay for an actual film.  And of course the novel makes for a great story board for the film; that’s what’s so great about it. It’s going to work as a great visual piece, and it will give definitely great ideas for when we create the film.

Oh boy, film scoop!  What else can you tell us about it?

The film is — we’re working on the script right now, which is pretty much done. At the end of the year, we’re going officially into production for the film. So we really want to build up the comic book a little bit more, you know what I mean?

So you want the public to be familiar with Head Smash the graphic novel character first, before buzz starts around the film?

Absolutely. You know, a lot of times you find out about the graphic novel after the release of the film. You know, like The Walking Dead turned into a TV show, then I found out about the comic book after the TV show.  But this one, basically, we really want to build that character awareness, and then the film will come next. 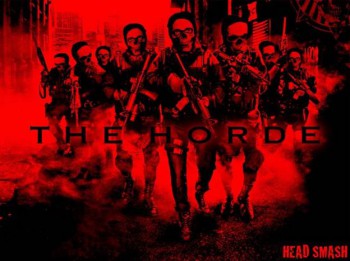 Will the film be strictly faithful to the graphic novel or will the film storyline differ?

Any casting hints for us?

Okay, okay.  We get it.  Is there a tentative release date for the film? 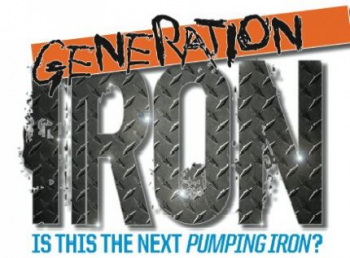 Can you give us scoop on the other projects you’re working on?

We are doing a big project called Generation Iron. It is the new chapter of the Pumping Iron legacy.  Pumping Iron is a big classic hit with Arnold Schwarzenegger and Lou Ferrigno about working out.  It is completely different than this. We are doing a new version of that.  It stars Mickey Rourke.  It is about the modern day building world and competing for Mr. Olympia, which is the biggest body building in the world.  It is very intense too. It is
very different from Head Smash but very intense film. It is a very strong docu-drama that we are finishing up right now. It is coming out in September (2013) in theaters.

I understand you also have a horror movie coming out soon – Catskill Park.

It is almost completely done. I don’t have a release date for it yet. We are finishing it up right now so hopefully sometime in early to mid-2014.

Catskill Park is a found footage film. It is done in a documentary style. It is about four friends that go hiking in upstate New York in an area called Catskill Park. Everybody on the east coast knows where it is. It is a very large wooded mountain area in upstate New York. They go there for a hiking trip. They take a video camera with them. They wake up in the middle of the night and see a bright light right above them. They find out it is a U.F.O. type object that is right above them. The rest of the film is the recording from the video camera of how they survive through the night. It is about what happens to the human psyche in that state of uncertainty and what is going to happen next. It is a very cool psychological- horror-thriller film.

Last question; was it difficult growing up in the US being named Vlad?

Um, no.  The other kids thought it was cool really.

Vlad Yudin runs the media and entertainment company The Vladar Company with his creative partner Edwin Mejia.  Over the past three years, the company has produced multiple feature films and plans to produce a minimum of six feature film projects over the next five-year period.

Look for Head Smash in stores on July 31st.

Every time I see the name Head Smash, I think of this Dave Barry column about a Canadian tourist attraction called the Head Smashed In Buffalo Jump. As Dave Barry likes to say, I am not making this up.