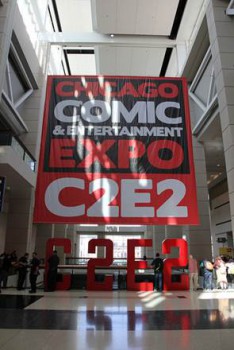 Last week the Chicago Comic and Entertainment Expo (C2E2 for you cool kids) rolled into town with its usual juggernaut of the innovative, the unusual and the spandex’d.

Though this is my fourth year covering the show for Black Gate, I must say it is by far the worst place to send someone like me who has a problem with staring; especially when doing so is likely to seriously annoy a very big person in a very small costume.

But never let it be said that I shirked my obligation to a long-suffering readership. Therefore I bribed Black Gate photographer Chris Z to once again wade into a precarious situation with me, this time with the promise he could meet all the crew of the Black Pearl from Pirates of the Caribbean who were listed as special guests.

Plus, Chris would be a good deterrent if I did indeed seriously annoy someone; like Batman or Chewbacca.

Almost immediately I realized Chris Z was probably in as much trouble as I was.

The first indication was a sign instructing us to text a number if we saw anything “suspicious.” At which point Chris and I looked at each other and said in unison, “Define suspicious.”

When everywhere you look are adults dressed as super heroes, Star Wars characters and video game icons, determining exactly what constitutes “suspicious” is darn near impossible. Which makes you wonder what would cause someone to text the number as instructed.

Still, Chris and I did our very best to put on the mental blinders and run through a full-day lineup of interviews, meet-and-greets and 100 aisles of merchandise. 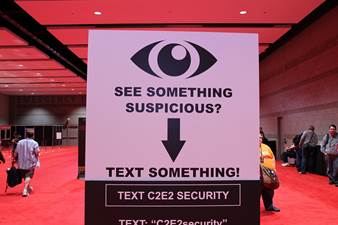 The results are highly entertaining as this year’s C2E2 broke records for quantity of both attendees and exhibitors; meaning the place was chucked full of the very best talent in art, writing, and indy film.

And we had the pleasure of meeting more than can be covered in one post without sending the Black Gate webmaster into a tailspin.

So for the next few weeks, Goth Chick News will bring you in-depth interviews with some very interesting people I am anxious to introduce to you. But for now, I’ll start by giving you a rundown of what I consider “The Best of Show.”

4 Stars Chicago Studios is home to Pins and Needles and Stitch Avenue as well as their creatives parents, Jack and Maria Gonzolez.

Jack is the mastermind behind Pins and Needles, an independent comic which he has written, inked and colored and with the quintessential Goth Chick storyline.

The premise focuses on three sack-like dolls created by Lucifer’s daughter. When she became bored of them as they were, she decided to bring life to the dolls by placing the souls of humans inside them.

Having no recollection of being human, the dolls begin to dream and these dreams are glimpses into their human lives. The three dolls together begin to search for answers and brave dangers and obstacles in order to find the truth about their past.

Okay, that’s not all Maria does, but Jack’s stories have been the inspiration behind Stitch Avenue and a line of what can only be called needlework art.

Maria’s subjects have included Dr. Who, characters from The Walking Dead, and Freddy Kruger.

But the best one ever is the doll Maria did as a C2E2 show exclusive: Edward Scissorhands.

And guess whose desk he’s sitting on now…?

Both Jack’s comics and Maria’s dolls are available at their website.

C2E2 would be a diminished experience without a chat with my favorite horror comic crush Dirk Manning, creator of Nightmare World.

We’ve continued to follow Dirk’s career since first meeting him at 2011’s C2E2, knowing full well he was destined for something big (because here at Goth Chick News we’re nothing if not riders of coat tails); and Dirk did not disappoint.

There are now multiple installments of Nightmare World, Dirk’s homage to the Creepshow-esque horror comics of our childhoods as well as a guidebook for comic writers called Write or Wrong, which has turned into a recurring column on the very popular website Newsarama.

But this year Dirk is hinting around at something more in the huge category. To his credit, he firmly believes in jinxing a project by talking about it too soon and in this case there are several projects at stake.

My guess is that sometime in the near future, Dirk might turn up somewhere very interesting – like on a screen of some size or other.

But until we know for sure (and he promised me Goth Chick News would be the first), the latest installments of Nightmare World more than qualify for Best of Show. Dirk knows how to rock a comic scare for certain.

Ladies and gentlemen, if you take nothing away from our C2E2 adventure, take this: nothing says confidence and manly prowess like a kilt.  Just ask a woman and she’ll tell you – guys in kilts are hot.

American-made Utilikilts just keep gaining momentum and not as a gimmick, but as an honest-to-goodness alternative to trousers.

Not only have I started seeing guys wearing them in everyday settings, but they’ve started turning up as formalwear and at construction sites – no joke.

And you might ask what Utilikilts were thinking setting up a large corner booth at C2E2… until you remember that one of the “E’s” stands for entertainment. Aisles around the booth were two-men deep in potential customers, with another five-women deep of ladies being entertained by the models.

Ranging from $150 for the standard model all the way up to over $500 for formal wear, Utilikilts are for real men with real coin only.

Long live the kilt… that’s all I have to say.

From EFM comes just about the coolest tee-shirt I’ve ever seen.

Electroluminescence (EL) is a unique chemical that emits light when it is charged by electricity or battery power, and EFM has used this technique to create logo tees enhanced with a graphic-illuminating, electro-luminescent panel powered by one AAA battery.

That’s a tech-geek way of saying the shirts are wearable neon signs. The graphics either run through their light sequence repeatedly, or pulse to surrounding sounds.

The best examples were the famous Las Vegas sign tee which lit up like the real thing and the chasing colors of the original MTV logo tee.

All tees run around $35 and are available for sale on EFM’s web site.

So before I wrap up this year’s C2E2 coverage with the coveted Five Bat Award for innovation, you’re probably wondering if Black Gate photog Chris Z got to meet his pirates.

The answer is yes, we both did actually.

All four gents were personable and chatty with Martin Kleeba, taking the time to trash talk with Chris Z about who would win the Stanley Cup: his beloved Red Wings or our Chicago Black Hawks.

But the most memorable discussion was with Lee Arenberg, with whom we stood around talking about everything from motorcycles to his wife’s Persian rug fetish to tattoos.

After exchanging tips on how best to keep new tattoo swelling down, Lee asked me, “well where’d you get yours then?” to which I replied, “Naperville.” 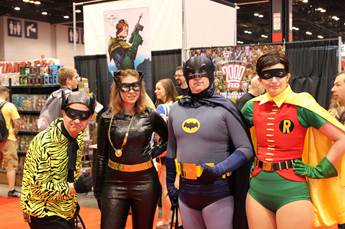 He and Chris stared blankly at me for a moment before Lee nearly killed himself laughing, “No, I meant where on your body did you get them – is ‘Naperville’ a code word for someplace?”

We never did get around to discussing the movies after that. And I’ll have to listen Chris Z. retell that story for the next ten years, minimum.

And now, without further ado…

Because I couldn’t decide between two incredibly cool technology innovations, in an unprecedented move I am awarding dual Five Bats this year…

The first goes to the MeCam developed by tech genius Drew Martin. Measuring less than 2 inches diameter and customizable in color and capacity, the MeCam is the hands-free wearable video camera that pins to your shirt, can be worn as a necklace, or pinned on to anything to capture video from that point of view.

Unique features include its small size, light weight, and ability to shoot in low-light/dark conditions through Infrared LED lights built into the device. 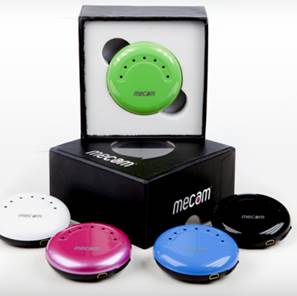 The MeCam’s quality is superb and the tiny camera has the storage and battery capacity for nearly two hours of filming.

Retailing from $50 to $80 the MeCams are available for sale online though I bought one immediately with the idea of hooking it to my motorcycle helmet.

You didn’t think I got around on roller skates did you…?

The second Five Bat is not only for innovating once but twice.

Last year at C2E2, Shawn Recinto and Immersive Realms, Inc made the “Best of Show” write up for creating a product that no game room, cubical or office should be without – namely a Box O Zombies.

Therefore I was thrilled to see that Shawn was back again this year in a booth twice the size of the one he had in 2012, thinking he must be selling truckloads of boxes o’ zombies.

But no, Shawn has taken a very simple idea and super-sized it.

Box O Zombies is about to be an interactive experience using an NFC (“near field communication”) Bluetooth device from Creative Proximity connected to a Box O Zombies game app for Android and iPad.

The new zombie figures, now fully painted and highly detailed, are NFC-enabled and when placed on the “touchstone” NFC reader, it attaches the figure’s picture and attributes to your online account, unlocking special features in the game.

After the first activation, having the figure sitting on top of the Touchstone during gameplay will enable additional perks, capabilities and features.

If that wasn’t cool enough, Shawn is taking the technology open-source, meaning other developers will be allowed to write code for his “touchstone” and someday your Bart Simpson figure could enter your Box O Zombies environment.

Box O Zombies the game isn’t available just yet, but we’ll be bringing you an in-depth interview with Shawn before launch and before we have to talk to his lawyer, his secretary, and his personal masseuse prior to getting an appointment with him.

Congrats to Shawn and Drew – consider our minds blown.

[…] is one of the people I couldn’t wait to introduce you to, whom I met at this year’s C2E2 event in Chicago.  When Nicole at Quirk Books got in touch, she described EB (he said we could all call […]

[…] fact, at this year’s C2E2 I overheard an interesting bit of Blade Trinity trivia which maybe helps explain […]

[…] to be the inspiration for Marcia’s amazing crocheted creations, such as my prized and beloved Edward Scissorhands from C2E2 2013.  This year Chris Z just couldn’t resist and made off with his very own crocheted […]