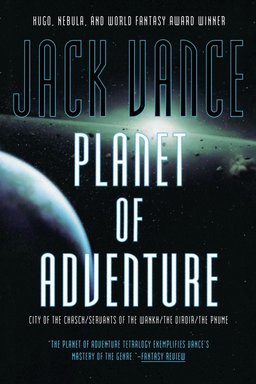 I’ve been exploring the work of Jack Vance recently, inspired by the beautiful volumes from Subterranean Press collecting his earliest short stories, The Early Jack Vance. Four have been released so far, and we covered the upcoming fifth volume, Grand Crusade, here.

I don’t think I really understood just how prolific Jack Vance was until I set out to collect his paperbacks. I began that undertaking decades ago, and it’s still underway. At last count, I had well over 50. He published over 20 through DAW alone (Amazon has listed many of them here).

Still, one of the great things about Vance is that you don’t have to work hard to find his most popular fiction. Over the years much of it — including his Dying Earth, Demon Princes, Durdane, Alastor, and Ports of Call books — has been collected in handsome and affordable omnibus editions from Orb/Tor, Gollancz, and the Science Fiction Book Club. And most of them are still in print.

Earlier this week I published the third and final installment of my survey of The Omnibus Volumes of C.J. Cherryh. That started out as a modest attempt to catalog the omnibus editions of Cherryh’s early paperback SF and fantasy from DAW Books, and eventually became an excuse to showcase the covers of all 22 of her original novels. It was a lot of fun, especially if you have an obsessive interest in vintage paperbacks like I do.

Coincidentally, I ordered a set of Jack Vance omnibus editions earlier this month, and when they arrived I realized I could do the same thing with Vance. I’ve never really explored Vance’s back catalog with any thoroughness here at Black Gate, and it seemed like the right time.

So here we are. We’re kicking things off today with Planet of Adventure, an omnibus collection of four linked space opera novels: City of the Chasch (1968), Servants of the Wankh (1969), The Dirdir (1969), and The Pnume (1970). Next to The Dying Earth this is perhaps Vance’s most popular series, so it’s as  good a place to start as any.

Stranded on the distant planet Tschai, young Adam Reith is the sole survivor of a space mission who discovers the world is inhabited — not only by warring alien cultures, but human slaves as well, taken early in Earth’s history. Reith must find a way off planet to warn the Earth of Tschai’s deadly existence.

And always the random beauty in need of rescue…

One of the things I’ve always liked about that blurb is the description of the setting: “baroque cities and haunted wastelands, sumptuous palaces and riotous inns.” Is it weird that I’m more intrigued by a book because it includes “riotous inns?”

The four Planet of Adventure novels were originally published by Ace Books between 1968-1970, with covers by the great Jeff Jones:

The Jones covers gave these books a definite science fantasy feel. I found them very Burroughs-like, even when I first saw them in the early 70s.

The novels weren’t reprinted by DAW until 1979, with a new set of covers by H. R. Van Dongen that lent them a much more science-fiction air:

Orb wasn’t the only publisher to hit on the idea of collecting all four of these slender volumes into one book. In November 1985, Grafton Books issued a 536-page trade paperback omnibus in the UK, with a cover by Geoff Taylor (below left).

Tor Books issued the first omnibus here in the US on August 15, 1993, with a cover by Dave Archer (above right).

The omnibus edition of Planet of Adventure is still in print from Tor/Orb. It is 541 pages, priced at $21.99 in what appears to be a print-on-demand trade paperback. There is no digital edition.

Next up: Part II: Tales of the Dying Earth.

You can get the individual books as ebooks through the Vance estate itself, but not cheaply.

This is some of the earliest SF I read. And I loved it.

I read the Dirdir a long time ago. I can’t remember what it was about, but I do remember liking it. I guess I need to pick up that omnibus.

Such good stuff you have in store for you.

I think pretty much all of his back catalog these days is available electronically from Amazon or from jackvance.com. Looks like the eBooks are mostly in the $6 range, which isn’t necessarily cheap (esp. when many of them are in the 175-200 page range), but I was happy to pay it.

I found city of the chasch with the jeff jones cover at half price books for $2.50. I see Vance’s name come up all the time so i figured i better read some his stuff.

I have that book and the dying earth omnibus.

> You can get the individual books as ebooks through the Vance estate itself, but not cheaply.

Right you are. The Jack Vance website is offering the entire series in digital format (although volumes 1 and 2 have been renamed The Chasch and The Wannek, which I presume are Vance’s preferred titles) for $5.99 each – alongside dozens of other titles.

Vance has a terrific back catalog, but I wonder how well the site is doing without a major publisher helping promote it.

> I read the Dirdir a long time ago. I can’t remember what it was about, but I do remember liking it.
> I guess I need to pick up that omnibus.

If it’s been THAT long, then I think you’re right. 🙂

My major problem with the Jack Vance website is that they don’t bother to tell you that City of the Chasch and Servants of the Wankh have been retitled (not even in the lengthy book descriptions do they mention the original titles). It wasn’t hard to figure out, but if you’re casually browsing looking for that one title you read long ago, it can be frustrating!

> I found city of the chasch with the jeff jones cover at half price books for $2.50.

Nice finds! I miss those days of browsing through used book stores. All the ones within 10 miles of my home are now out of business.

> I have that book and the dying earth omnibus.

I think I’ll cover THE DYING EARTH next. I was tempted to do it first, but I didn’t have time to track down the many, many covers of the paperback editions. That’s going to be a challenge! At least the PLANET OF ADVENTURE books had a limited number of variant editions…

>My major problem with the Jack Vance website is that they don’t bother to tell you that City of the Chasch and Servants of the Wankh have been retitled (not even in the lengthy book descriptions do they mention the original titles).

John — If you feel that way about the Tschai books, just wait until you go looking for the Dying Earth books …

Probably my absolute favorite series of books by Vance, just nudging out his Dying Earth sequence. These are the books that made me a tremendous fan. Good luck with collecting his paperbacks John, indeed they’re getting harder and harder to find. I have 81 and I know whenever I come across one reasonably priced to pick it up.

81? Wow! I can see I have a few decades of collecting ahead of me still.

Thanks for the great endorsement of these books as well. I haven’t read PLANET OF ADVENTURE yet, but I can see now that was a serious oversight.

Hi, John,
As a long-time fan of Jack’s — first discovered his work via ‘Mazirian the Magician’ in the excellent Sprague de Camp anthology ‘The Spell of 7′ back in 196? — I’m continually amazed that 1. more SF/F readers aren’t familiar with him, and that, 2. despite that fact, there are so many editions of his work. Yes, he was prolific but, more than that, his writing seems to inspire a true affection. I’m reminded of Silverberg’s comments once that his stories should be numbered, so that all one would need do is call out, say, ’74’, and the many JV fans could smile and nod, knowing you were referring to ‘The Moon Moth’, or ’17’, with all happily recalling the joys of ‘Cugel’s Saga’. Thanks for taking up this challenging quest!

Wow! – that’s the exact story and collection for my first read of Vance too, except I read it in the early 90’s.

[…] The Omnibus Volumes of Jack Vance, Part I: Planet of Adventure […]