What we have here is a pair of novels in an intriguing new dark fantasy series which were both released last month — California Bones in paperback, and Pacific Fire in hardcover.

California Bones is the first; it was published in hardcover by Tor last year. It’s an epic adventure set in a world similar to our own, in the Kingdom of Southern California, in a city of canals and secrets and casual brutality.

When Daniel Blackland was six, he ingested his first bone fragment, a bit of kraken spine plucked out of the sand during a visit with his demanding, brilliant, and powerful magician father, Sebastian.

When Daniel was twelve, he watched Sebastian die at the hands of the Hierarch of Southern California, devoured for the heightened magic layered deep within his bones.

Now, years later, Daniel is a petty thief with a forged identity. Hiding amid the crowds in Los Angeles — the capital of the Kingdom of Southern California — Daniel is trying to go straight. But his crime-boss uncle has a heist he wants Daniel to perform: break into the Hierarch’s storehouse of magical artifacts and retrieve Sebastian’s sword, an object of untold power.

For this dangerous mission, Daniel will need a team he can rely on, so he brings in his closest friends from his years in the criminal world. There’s Moth, who can take a bullet and heal in mere minutes. Jo Alverado, illusionist. The multitalented Cassandra, Daniel’s ex. And, new to them all, the enigmatic, knowledgeable Emma, with her British accent and her own grudge against the powers-that-be. The stakes are high, and the stage is set for a showdown that might just break the magic that protects a long-corrupt regime.

The sequel, Pacific Fire, arrived in January; it returns to the world of California Bones, but features new characters and focuses a dangerous magical plot unfolding in Los Angeles.

Okay, yeah, I’m a golem created from the substance of his own magic by the late Hierarch of Southern California. With a lot of work, I might be able to wield magic myself. I kind of doubt it, though. Not like Daniel Blackland can.

Daniel’s the reason the Hierarch’s gone and I’m still alive. He’s also the reason I’ve lived my entire life on the run. Ten years of never, ever going back to Los Angeles. Daniel’s determined to protect me. To teach me.

But it gets old. I’ve got nobody but Daniel. I’ll never do anything normal. Like attend school. Or date a girl.

Now it’s worse. Because things are happening back in LA. Very bad people are building a Pacific firedrake, a kind of ultimate weapon of mass magical destruction. Daniel seemed to think only he could stop them. Now Daniel’s been hurt. I managed to get us to the place run by the Emmas. (Many of them. All named Emma. It’s a long story.) They seem to be healing him, but he isn’t going anyplace soon.

Do I even have a reason for existing, if it isn’t to prevent this firedrake from happening? I’m good at escaping from things. Now I’ve escaped from Daniel and the Emmas, and I’m on my way to LA.

This may be the worst idea I ever had. 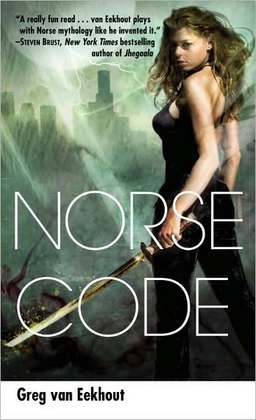 Greg van Eekhout’s first novel was Norse Code (Spectra, 2009), about a genome project designed to identify descendants of Odin, and a murdered MBA student brought back from the dead to serve as a valkyrie in Odin’s army. As plots go, you’re not going to find many more gonzo than that. I bought a copy as soon as it came out.

His other books include two middle-grade SF novels, Kid vs. Squid (2010) and The Boy at the End of the World (2012), which was a finalist for the Andre Norton Award.

If you want to check out Eekhout without springing for an expensive trade paperback, he’s got a number of short stories in the wild that you can sample for free.

You can read his superhero story “Last Son of Tomorrow” at Tor.com, and “The Osteomancer’s Son” in the latest issue of Clarkesworld magazine, Clarkesworld 101.

These are from last month? Those covers look really very, very retro. My first assumption was something from the 70s.

You think so? CALIFORNIA BONES reminds me of a 70s horror novel in some respects, but I found the cover to PACIFIC FIRE to be more striking and appealing. It’s also more colorful than many vintage paperbacks.

I think it’s mostly the font. And maybe I subconsciously associated the fake dirt on the letters with actual dirt.

This looks good. I’ll pick up a copy.

John, California Bones was published in 2014.

And it’s great! The heist plot is terrific, and alternate L.A. is a very freaky place.

I own (but haven’t read) Norse Code (yet) but my kid went crazy for Greg’s two MG books, so I knew I’d have to try CA Bones. Thumbs up.

Thanks for the mini-review! Glad to hear these books are as intriguing as they sound. (Also, thanks for the endorsement for the middle grade books. Is it weird that I want to start with them?)

Sorry for the confusion on the pub date for California Bones. I mentioned that that hardcover came out in 2014, but the cover and release information above is for the paperback edition that came out on January 6.

I thought Norse Code kind of bombed, but it is nice to see Greg getting another series. I read Norse Code and thought it was ‘ehh’, then again, I think the story goes he was told what ‘sold’ and made a novel to suit, which typically isn’t as inspired as following your real muse.

> I think the story goes he was told what ‘sold’ and made a novel to suit, which typically isn’t as inspired as following your real muse.

Who did you hear that from?

I spent time in a writing group from Livejournal back in 2008 or so, and one of the writers was a good friend and reader for the then unpublished Greg. She told me the story after Norse Code came out and I read it on her recommendation only to tell her I didn’t really like it. It was then she gave me that story. That said, I was recently in Mysterious Galaxy and saw a copy of Norse Code on the shelf and thought ‘How is that book still in print and on shelves?’ so maybe it had better legs after launch. Who knows.

The cover copy for Pacific Fire is just about perfect. If I ever need to 1st person cover copy, that’ll be one of the models I dissect first.