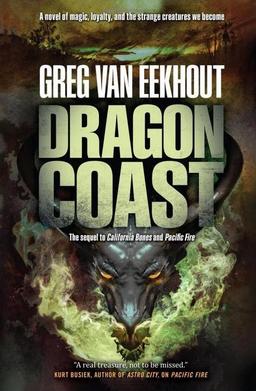 In California Bones, Greg van Eekhout introduced us to Daniel Blackland, a con artist attempting the biggest con of his career… who ends up crossing the terrifyingly powerful Hierarch, the tyrant ruling the Kingdom of Southern California. With the mysterious and powerful Sam, the Hierarch’s golem, Daniel ended up on the run. In the second novel, Pacific Fire, set a decade later, the pair return to L.A. to confront a brand new horror: the terrifying weapon of mass destruction called a Pacific Firedrake. In the concluding volume in the trilogy, the stakes are even higher, as Daniel Blackland must pull off his most improbable theft yet, by returning to the Kingdom of Northern California and stealing the bones of the great dragon at the center of the Earth.

Daniel’s adopted son Sam, made from the magical essence of the tyrannical Hierarch of Southern California whom Daniel overthrew and killed, is lost — consumed by the great Pacific firedrake secretly assembled by Daniel’s half-brother, Paul.

But Sam is still alive and aware, in magical form, trapped inside the dragon as it rampages around Los Angeles, periodically torching a neighborhood or two.

Daniel has a plan to rescue Sam. It will involve the rarest of substances, axis mundi, pieces of the bones of the great dragon at the center of the Earth. Daniel will have to go to the kingdom of Northern California, boldly posing as his half-brother, come to claim his place in the competition to be appointed Lord High Osteomancer of the Northern Kingdom. Only when the Northern Hierarch, in her throne room at Golden Gate Park, raises her scepter to confirm Daniel in his position will he have an opportunity to steal the axis mundi — under the gaze of the Hierarch herself.

And that’s just the first obstacle.

We covered the first two novels in the trilogy here. Dragon Coast will be published by Tor Books September 15, 2015. It is 320 pages, priced at $24.99 in hardcover and $11.99 for the digital edition. The cover is by Cliff Nielsen.

Greg seems a really good guy, and I’m very happy he found some success with this new series.