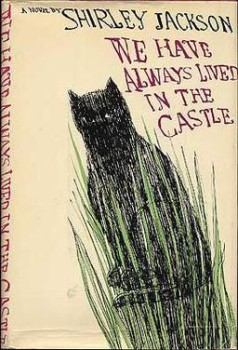 My name is Mary Katherine Blackwood. I am eighteen years old, and I live with my sister Constance. I have often thought that with any luck at all I could have been born a werewolf, because the two middle fingers on both my hands are of the same length, but I have to be content with what I had. I dislike washing myself, and dogs, and noise. I like my sister Constance, and Richard Plantagenet, and Amanita phalloides, the death-cap mushroom. Everyone else in my family is dead.

So opens Shirley Jackson’s final novel, We Have Always Lived in the Castle (1962). Published three years before her death, this introduction to the book’s narrator, better known as Merricat, seems to promise readers they are in for the story of a quirky young woman. It is indeed beguiling but bears only the slightest hint of what’s to come in this short novel. It is a book built of dark and deep shadows, pierced at times by shimmering passages, before becoming darker and more claustrophobic.

Merricat lives with her sister and their crippled and addle-minded Uncle Julian in the great mansion that the Blackwoods have always lived in. Six years ago something terrible happened for which all the townsfolk hate, and perhaps even fear, the Blackwoods. One evening, arsenic found its way into the sugar bowl and the sisters’ parents, younger brother, and aunt died. Their uncle took less sugar and survived, though irreparably broken. Constance, who cooked, who never took sugar — and who cleaned the sugar bowl before the police arrived — was accused and tried. No motive could be found and she was acquitted, but she has never since left the property. Only Merricat braves the village — twice a week — to buy food, take out books from the library, and suffer the staring and unpleasant treatment of the villagers. 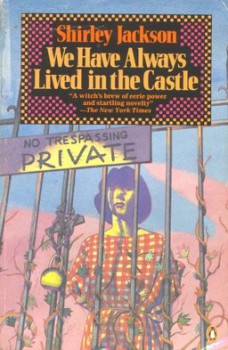 Despite their foul nature, Merricat replies only with please and thank you. Her thoughts, however, exposed to the reader, are frightening. When she enters the grocery store and people begin making jokes about the fine table the Blackwoods always set, she thinks:

I would like to come into the grocery store some morning and see them all, even the Elberts and the children, lying there crying with the pain and dying. I would then help myself to groceries, I thought, stepping over their bodies, taking whatever I fancied from the shelves, and go home, with perhaps a kick for Mrs. Donnell while she lay there. I was never sorry when I had thoughts like this; I only wished they would come true.

Her life is also filled with rituals, and efforts at a sort of magic, to protect her and her sister from danger. Around the edges of her family property she has placed objects to ward off evil. To a tree she has nailed a notebook; in another place she’s buried a box of silver coins. She chooses magic words that, as long as they remain unuttered, will thwart disaster. When the nail holding up the book rusts through Merricat rushes to find a new totem, but she knows it is already too late; change is coming to the Blackwood house.

That change is cousin Charles Blackwood. His parents had cut off all contact with the sisters after the poisoning, even refusing to take in Merricat during the trial, relegating her to an orphanage. Now claiming to want to build bridges and bring Constance out of her seclusion, Charles is clearly looking to get his hands on his cousins’ wealth. The subsequent struggle between Charles and Merricat for Constance becomes the mechanical plot focus of the book. 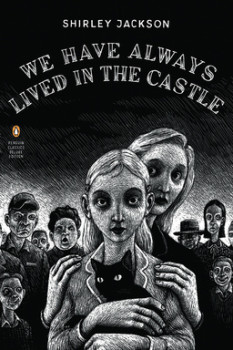 We Have Always Lived in the Castle, though, is really the story of Merricat Blackwood, her perception of the world, and her relationship with Constance. She has one of the most distinctive and powerful personalities in fiction. Her thoughts range from the fantastical to the monstrous, and she rarely doubts their correctness.

In one passage she imagines her dead family praising her, “Bow all your heads to our adored Mary Katherine.” In others she is given to moments of fantasy that are downright delightful. On a Sunday morning she lays in one of her secret hiding places and listens to her cat Jonas tell a story.

All cat stories start with the statement: “My mother, who was the first cat, told me this,” and I lay with my head close to Jonas and listened. …Jonas went on and on (“And then we sang! And then we sang!”) and the leaves moved overhead and it would always be the same.

Constance possesses a less substantial personality than her younger sister. While she demonstrates domestic strength she, like a ghost, seems unable to break the shackles binding her to the Blackwood house. She tends Uncle Julian, does the cooking, lays up preserves, sets down rules for Merricat (telling her to wear boots outdoors and not letting her handle knives), but she can’t venture past the garden path.

Merricat knows Charles is a disruptive force almost the moment he opens his mouth. Constance, on the other hand, clearly still longs for a chance to join the outside world and readily accepts his blandishments at face value. The struggle over Constance between Charles, at best a cad offering the real hope of freedom, and Merricat, who genuinely loves her despite advocating a stagnant life in the Blackwood house, takes on dimensions of a twisted love triangle.

Jackson herself suffered from agoraphobia during the latter years of her life, even becoming unwilling to leave her own dirty and cluttered room. The village in the book is based closely on North Bennington, Vermont where she and her husband, critic Stanley Edgar Hyman, lived and faced anti-Semitism and a general attitude of anti-intellectualism from the locals. Supposedly, Merricat and Constance are highly exaggerated simulacrums of her own two daughters. It seems obvious that real situations influenced the novel, but artist that she was, Jackson doesn’t make things quite so simple in We Have Always Lived in the Castle. 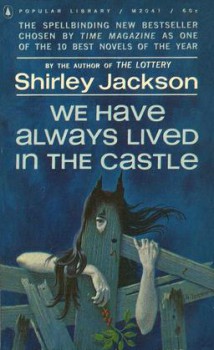 Merricat drops numerous clues that the Blackwoods were never pleasant people. They were wealthy and held themselves above the common villagers. The first thing her mother did when she arrived at the Blackwood house was have her husband close off the shortcut across the property that people had used for ages. And, as rude and mean-spirited as the villagers are toward the surviving Blackwoods, someone did murder four people and get away with it, somewhat justifying their attitude.

This book is one that is indelibly marked in my mind. We Have Always Lived in the Castle can be read as a paean to agoraphobia. Merricat knows the outside world is unpleasant and discomfiting. The town is drab and unpleasant and “the only proper place” for the villagers. They are stupid and superstitious and the only way they can relate to their betters is with taunts and nursery rhymes. The Blackwood house represents all that is good and worthy. All her rituals serve to protect it from any further intrusions from beyond its gates.

My new magical safeguards were the lock on the front door, and the boards over the windows, and the barricades along the sides of the house.

As bad and restricted as things become inside the house they are always better than the rest of the world. Jackson’s brilliance is to bring the reader deep into Merricat’s psyche and make her view of the world just the littlest bit believable.

With Halloween looming, if you are in search of a good chill, We Have Always Lived in the Castle will provide it. There’s much more I could write about this book, but I would be giving away too many of its lovely and poisonous secrets.

Then try Jackson’s other Gothic tale, The Haunting of Hill House (masterfully discussed here by Matthew David Surridge). Neither book will let you down.

John O’Neill posted a short piece on this book earlier this summer. It provided the impetus to discover if the book held up for me, nearly thirty years after having first read it. It, quite easily, did.

Fantastic book, I should reread it. Also, The Haunting of Hill House is one of my favorite novels.

I had no idea about Jackson’s condition, her daughters or the prejudice she faced.

It is interesting how distant Constance always is. I think she seemed genuinely nice but goes too far in protecting Merricat.