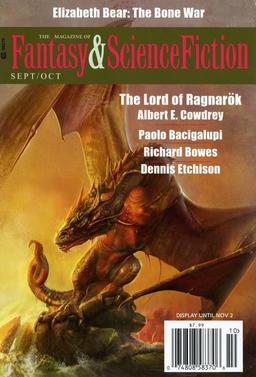 One of the fun games you can play with F&SF these days is “Guess Which Editor Bought What?” New editor C. C. Finlay has been acquiring fiction at a good clip (and indeed, his very first issue, July-August 2014, produced a Nebula Award winner, Alaya Dawn Johnson’s “A Guide to the Fruits of Hawai’i.”) But certainly outgoing editor Gordon van Gelder left him with a fair inventory of stories, so for at least his first year or so, the magazine will be a mix of his taste and Gordon’s. That’s the theory, anyway.

The September/October issue is only Finlay’s fourth, but fans are anxious to get a sense of his taste, so there’s lots of discussion and conjecture. But however you look at it, the magazine is packed with lots of great fiction, including tales from Paolo Bacigalupi, David Gerrold, Ron Goulart, Dennis Etchison, Elizabeth Bear, Richard Bowes, Albert E. Cowdrey, and others.

Jerard Bretts at Tangent Online has already reviewed the issue, with high praise for the contents:

Albert E. Cowdrey… always writes entertainingly. This time he contributes “The Lord of Ragnarök,” a fantasy novella in the grittily realistic Game of Thrones tradition, set in medieval Europe sometime after the Crusades. With some nice wordplay on the author’s name, it tells the story of slippery Sir Richard de Coudray and his rise from peasant boy to knight. One of Cowdrey’s major achievements here is to make us feel sympathy for this slippery and essentially Machiavellian character…

Bram Stoker wrote Dracula in 1897 and since then there have been many variations on the vampire theme. So how can a writer keep it fresh? David Gerrold both asks and answers that very question magnificently in his absorbing novelette “Monsieur.” Although the opening portion of a novel it works well as a self-contained story with a very satisfyingly clever ending. Another highly recommended story.

Fans of Ron Goulart’s novel Clockwork’s Pirates, and his classic collection What’s Become of Screwloose? and Other Inquiries, will be delighted with his contribution this issue, “The Adventure of the Clockwork Men,” the second tale featuring his Edwardian supernatural detective Harry Challenge.

Departments this issue include book reviews by Charles de Lint and Chris Moriarty, film reviews from David J. Skal, cartoons by Arthur Masear and Danny Shanahan, and a Curiosities column, on the 1904 novel Light Ahead for the Negro, by Phoenix Alexander.

The cover is by Cory and Catska Ench, illustrating “The Lord of Ragnarök.”

We last covered F&SF here with the July/August 2015 issue.