I don’t know about you, but I only have limited reading time and a lot to choose from. No matter what your taste however, you’re bound to find something intriguing offered this month — from exciting series work to stand-alone fantasy, from new novels to genre classics gathered for the first time. This month we see new titles from David and Leigh Eddings, Jack Vance, Robert Jordan, R. A. Salvatore, and more. 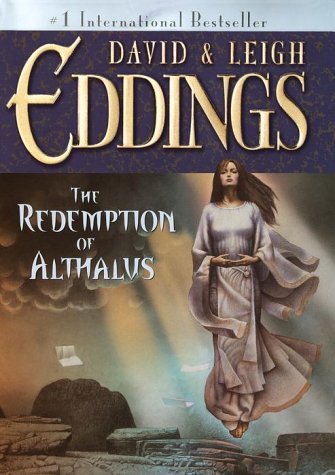 The Redemption of Althalus

Although they’ve been collaborating for more than a dozen years, this is the Eddings’ first stand-alone epic fantasy novel. (Hard to believe, I know… things have changed since I started reading fantasy, I can tell you). The British edition was published earlier this year and became a #1 bestseller on The London Times list.

Note to collectors (and those who may mistake this for a series): Del Rey is producing the book with two covers, both by artist John Jude Palencar. The alternate cover is at right. We’re told the “Goddess” cover will only be available in the first printing.

“It would be sheer folly to try to conceal the true nature of Althalus, for his flaws are the stuff of legend. He is, as all men know, a thief, a liar, an occasional murderer, an outrageous braggart, and a man devoid of even the slightest hint of honor.

Yet of all the men in the world, it is Althalus, unrepentant rogue and scoundrel, who will become the champion of humanity in its desperate struggle against the forces of an ancient god determined to return the universe to nothingness. On his way to steal The Book from the House at the End of the World, Althalus is confronted by a cat–a cat with eyes like emeralds, the voice of a woman, and the powers of a goddess.

She is Dweia, sister to The Gods and a greater thief even than Althalus. She must be: for in no time at all, she has stolen his heart. And more. She has stolen time itself. For when Althalus leaves the House at the End of the World, much wiser but not a day older than when he’d first entered it, thousands of years have gone by.

But Dweia is not the only one able to manipulate time. Her evil brother shares the power, and while Dweia has been teaching Althalus the secrets of The Book, the ancient God has been using the dark magic of his own Book to rewrite history. Yet all is not lost. But only if Althalus, still a thief at heart, can bring together a ragtag group of men, women, and children with no reason to trust him or each other.” 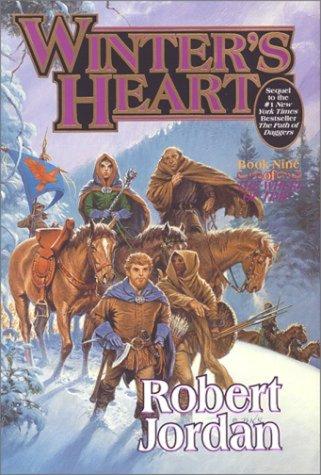 Robert Jordan’s Wheel of Time series is perhaps the biggest thing in fantasy at the moment (next to the juggernaut that is Harry Potter). In some ways, it is breaking new ground in American fantasy publishing in terms of sheer narrative mass if nothing else — the series is approaching 7000 pages in length, and there’s no sign of it slowing yet. Surely no other contemporary fantasy series has captivated so many readers with so epic a tale.

I hear a lot of complaints from readers that the events of the first few books are already fading into dim memory, making it difficult to keep up… but isn’t that rather the point of the whole “Wheel of Time” angle? Works for me.

“Millions of Robert Jordan fans will rejoice at the release of the ninth book in the phenomenally bestselling series The Wheel of Time. The sequel to the #1 New York Times bestseller The Path of Daggers that swept the nation like a firestorm, Winter’s Heart continues the remarkable tale that is mesmerizing an entire generation of readers.

Rand, with Min, is on the run, and Cadsuane, in Carhien, is trying to figure out where he is headed. His destination is, in fact, one she never considered. Mazrim Taim, leader of the Black Tower, is revealed to be a liar. But what is he up to?

Faile, with her companions Bain and Chiad (the Aiel Maidens), and Queen Alliandre and Morgase, is prisoner of Sevanna’s sept. Perrin is hunting desperately for Faile. With Elyas Machera, Berelain, the Prophet, and a very mixed “army” of disparate forces, he is moving through country rife with bandits and roving Seanchan… and in the wolfdream the man called Slayer seems to be hunting Perrin. In addition, the Forsaken are ever more present.

In Ebou Dar, the Seanchan princess known as Daughter of the Nine Moons arrives — and Mat, who has been recuperating in the Tarasin Palace, is introduced to her. Will the marriage that has been foretold come about?

There are neither beginnings nor endings to the turning of the wheel of time. But it is a beginning…” 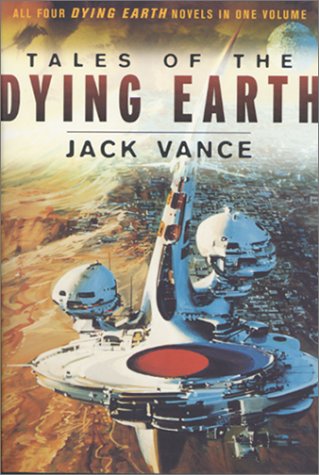 Tales of the Dying Earth

Last Year I saw a copy of The Great Book of Amber: The Complete Amber Chronicles, 1-10 by Roger Zelazny (Eos, December 1999), a huge omnibus volume collecting all ten volumes of the classic Amber series — over 1200 pages of classic fantasy packed into one gigantic brick. My first thought was “My God, I didn’t think that was possible,” and the second was “I gotta have it.”

Omnibus collections have become more popular in the last few years. Something to do with the modern fantasy reader’s love of the thick and the sturdy, I would wager. Ace and Eos have done some terrific single-author collections, but Tor/Orb is still the leader. Tales of the Dying Earth is no less than the fourth Vance omnibus of the last few years, after Planet of Adventure (1993), The Demon Princes, Volume One (1997) and The Demon Princes, Volume Two (1997).

This latest collection gathers some of Vance’s most important work into one volume: the complete Dying Earth series, one of the most influential works of science fantasy the genre has seen. Since its appearance in a tiny press run as an original paperback from Hillman Books, The Dying Earth has been reprinted numerous times and has spawned three sequels.

“Jack Vance is one of the most remarkable talents to ever grace the world of science fiction. His unique, stylish voice has been beloved by generations of readers. One of his enduring classics is his 1950 novel, THE DYING EARTH, and its sequels — a fascinating, baroque tale set on a far-future Earth, under a giant red sun that is soon to go out forever. This omnibus volume comprises all four books in the series, THE DYING EARTH, THE EYES OF THE OVERWORLD, CUGEL’S SAGA and RIALTO THE MAGNIFICENT. It is a must-read for every sf fan.” 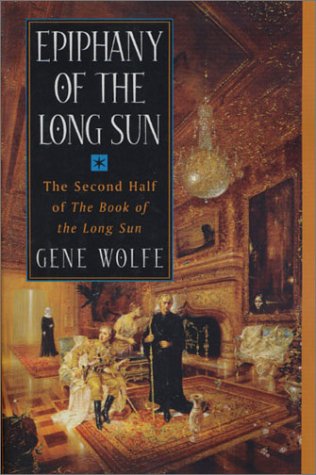 Epiphany of the Long Sun

Told you Orb was into Omnibus collections in a major way. This is the fourth omnibus in Wolfe’s enormous New Sun/Long Sun saga, which is currently continuing with The Book of the Short Sun, including On Blue’s Waters, the first volume, just released in trade paperback in September.

Confused? I don’t blame you. This is a complex saga and not for those who give up easy.

“In the final volume of The Book of the Long Sun series, Patera Silk, a young cleric on The Whorl starship, becomes ruler of the city of Viron after going on a mission to save the city’s churches. Contains Calde of the Long Sun and Exodus from the Long Sun.” 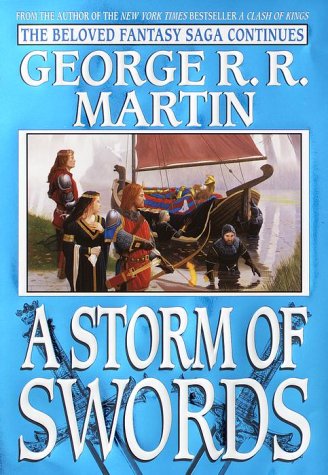 A Storm of Swords

George R.R. Martin’s A Song of Ice and Fire is arguably the most critically acclaimed fantasy series on the market today and the first two volumes (right) have proven the market for adult, sophisticated epic fantasy. Whatever the sales figures, the third volume is easily the most eagerly awaited novel of the year. Yes it’s overdue and, yes, at nearly 1000 pages it’s the heaviest installment so far. Make space on your bookshelf — Martin has now confirmed that the series will run a total of six books. The First Editon is now available in the UK, and Meisha Merlin has announced limited editions of the entire series, for those of you who have to have deluxe printings.

“The men of the Night’s Watch are ready for the coming of a great cold and the walking corpses that travel with it. But now they face a horde of wildlings twenty-thousand strong — hungry savage people steeped in the dark magic of the haunted wilderness — poised to invade the Kingdom of the North where Robb Stark wears his new-forged crown. But Robb’s defences are ranged against attack from the South, the land of House Stark’s enemies the Lannisters. His sisters are trapped there, dead or likely yet to die, at the whim of the Lannister boy-king Joffrey or his depraved mother Cersei, regent of the Iron Throne. Cersei’s ambition is unfettered while the dwarf Tyrion Lannister fights for his life, a victim of treachery. And on the other side of the ocean, the last of the Targaryens rears the dragons she hatched from her husband’s funeral pyre. Daenerys Stormborn will return to the land of her birth to avenge the murder of her father, the last Dragon King on the Iron Throne.” 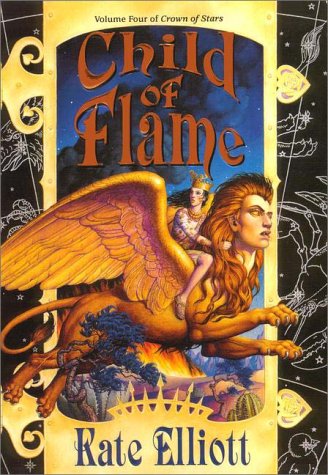 Kate Elliott has proven a talent for series — first with the 4-volume science fiction series Jaren from DAW (Jaran, An Earthly Crown, His Conquering Sword, and The Law of Becoming, all still in print), and now with a comparable series of fantasy novels, Crown of Stars. Unlike George R.R. Martin, however, Elliott also seems to have a gift for writing quickly: King’s Dragon was released in 1997, and she’s averaged better than a book a year since. Good thing, too, as it looks like this set’s going to carry on well past four volumes. Like your fantasy in large, nourishing installments? Look no further.

“Child of Flame takes us far beyond the borders of the war-torn kingdoms of Wendar and Varre as Alain is drawn into the heart of an ancient conflict between humankind and their dread enemy, the Cursed Ones; Liath faces her most difficult trial in a land of exile; and Sanglant struggles to reach Henry with a warning about the conspiracy of sorcerers who have sworn to put an end to the Aoi-no matter how much destruction may be unleashed by their workings of magic…..” 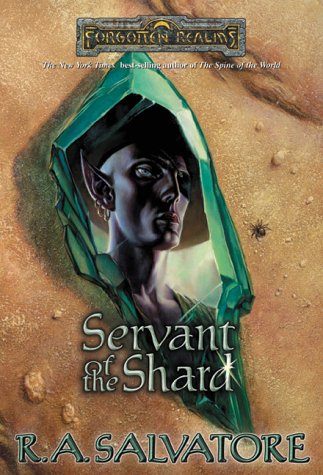 Servant of the Shard

I’ve spent a lot of late nights (when I should be reading Black Gate manuscripts) poking through ice caves and frozen tombs in Interplay’s excellent D&D computer game Icewind Dale, set in the Spine of the World mountains of the Forgotten Realms — the setting of R. A. Salvatore’s famous early Icewind Dale trilogy: The Crystal Shard, Streams of Silver, and The Halfling’s Gem. Now he returns to the same same setting with a new tale. Should I read it now, or finish the game first?

“The dark elf Jarlaxle is bent on becoming all-powerful. He gets his greedy hands on the Crystal Shard, but soon the evil artifact’s demonic force overcomes him. His assassin compatriot, Artemis Entreri, tries to help him break free, but the dark power of the Shard is too mighty. With time running out, they seek the assistance of the virtuous Cadderly.”