The first novel in Jack Vance’s Demon Princes saga, The Star King, was published as a two-part serial in Galaxy Magazine, in December 1963 and February 1964.

It took Vance eighteen years to complete the series — the fifth and final novel, The Book of Dreams, appeared in 1981 — and during that time he wrote all four novels in of Planet of Adventure, the Durdane trilogy, one novel in The Dying Earth, three books in his Alastor Cluster series, and at least four standalone novels. This is not a man who liked to focus on one thing at a time.

The Demon Princes is essentially a revenge fantasy. The central character is Kirth Gersen, whose entire village was enslaved while he was a child by five notorious criminals, collectively known as the Demon Princes. Each novel deals with an elaborate revenge scheme masterminded by Gersen on one of the five Princes, each of whom has achieved significant power — and embodies at least one major vice.

The setting is the Oikumene, a loose confederation of planets, and the books contain some of the best examples of Vance’s habit of worldbuilding through footnotes and lengthy excerpts from newspapers, court proceeding, and works of literature, history, and philosophy. One of those most frequently quoted is the philosopher Unspiek, Baron Bodissey, whose work also shows up in other Vance novels.

The first three novels of The Demon Princes were published in paperback in quick succession by Berkley Medallion, all with covers by Richard Powers (above; click for bigger versions).

In 1978 DAW Books began reprinting the series, with new covers by Gino D’Achille. The title of the first was subtly changed, becoming just Star King:

DAW published the next two as well, with covers by Gino D’Achille and Ken Kelly.

Various books in the series were published by Mayflower and Coronet in the UK. All five books were reprinted with handsome covers in 1988 by Grafton.

The Grafton covers were by Chris Foss.

The entire series was collected for the first time by Tor/Orb in 1997, in two volumes, with covers by Greg Call and Eric Peterson (see below).

These books bring back fond memories for me, although for an unusual reason. In 1997 I was running SF Site, and working the phones to try and build relationships with major publishers. Andy Heidel at Avon/Nova was the first publicist to take a chance on something as off-the-wall as an online review site, sending me a box of review copies in the spring of 1997. But no one at Tor had yet responded, and I was hoping to leverage our success with Avon to get some review copies out of them.

I finally managed to reach someone on the phone that summer and, armed with a list of upcoming Tor releases from Locus magazine, I was ready to make my pitch. But before I could, the publicist started talking about their upcoming two-volume reprint of the The Demon Princes. In a matter of minutes, we bonded over a mutual love of Jack Vance. My first box of review copies from Tor Books arrived a few weeks later. 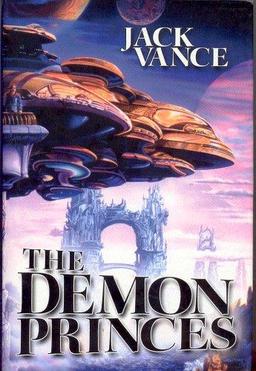 Tor/Orb eventually replaced the 1997 editions with what look like high-quality print-on-demand editions with covers by NASA/JPL-Caltech (see the images at top.)

Far as I know, there’s only one single-volume collection of The Demon Princes. It was published by the Science Fiction Book Club in March 1998, and reprinted in April 2005. The cover was by Ron Walotsky (see right).

The previous installments in this series are:

And our most recent coverage of Jack Vance includes:

And there is even a RPG based on these novels, now!

Really? How can there be a Vance RPG I know nothing about??

I loved these books when I was in high school. I read somewhere that Vance waited so long to write the last two because he wanted to come up with something really special. I think he succeeded. The endings are great, especially the last line (IIRC) of The Face.

Glad to hear that, Keith. I need to read more Vance, that’s for sure.

Pelgrane Press published The Gaean Reach. Written by Robin D. Laws, it is based on his GUMSHOE system, and it is a flipped “Demon Princes”, in that the party is a band of spacers seeking vengeance on a single Demon Prince, Quondos Vorn.

Wow! Right you are. I have no idea how I missed this… I’m a big fan of Pelgrane Press.

Thanks for the tip! I definitely need to write this one up on the blog.