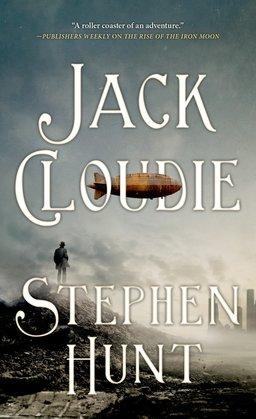 I think perhaps the most unusual thing about Stephen Hunt is that he claims to have virtually invented steampunk, with the publication of the first novel in his Jackelian series, The Court of the Air, in 2009. Here’s a snippet from his Amazon bio:

Hunt is arguably best known for his best-selling Jackelian series of novels… the success of the first of which, The Court of the Air, gave rise to a genre called steampunk.

The Jackelian world is a fantasy adventure set in a far-future Earth where the passage of time has erased almost all memory of our current world from history. Electricity is now unreliable and classed as a dark power, with many of the nations of the world existing at a Victorian level of development and relying on steam-power, mechanical nanotechnology and biotechnology to survive and prosper.

It is an age of strange creatures, flashing blades, steammen servants, airship battles and high adventure.

That’s a pretty gutsy claim, especially since the term steampunk was coined by K. W. Jeter in a letter to Locus in 1987, and there have been steampunk bestsellers as far back as William Gibson and Bruce Sterling’s The Difference Engine in 1990 (and the seminal steampunk RPG Space 1889 came out in 1988).

Nonetheless, Hunt has been one of the more popular practitioners of the form. His Jackelian series now totals six novels.

Jack Cloudie was published by Harper Voyager in the UK in 2011, and in hardcover in the US by Tor Books in August 2013. It finally arrived in paperback in March 2015, and I snagged a copy a few weeks ago.

Thanks to his father’s gambling debts, young Jack Keats finds himself on the streets in Middlesteel, his kingdom’s capital, trying to survive as a pickpocket. But when a daring bank robbery gone badly awry, Jack is headed for the gallows. He narrowly escapes the scaffold, only to be pressed into the Royal Aerostatical Navy, bound for almost certain death in the faraway deserts of Cassarabia.

On the other side of the world, the slave Omar ibn Barir finds his life turned upside down when his master’s religious sect is banned. Unexpectedly freed, he joins the Caliph’s military forces — just as war is brewing.

These two young men soon face each other in battle. But is Omar the enemy, or is Jack’s true nemesis the sickness at the heart of the Caliph’s court?

If Jack and his shipmates can discover what Cassarabia’s aggressive new regime is trying to conceal, he might survive the most horrific of wars and clear his family’s name. And Omar may find a way to bring peace and justice to the downtrodden in his land.

Regardless of his claims of having practically invented the genre, Hunt clearly understands the appeal of steampunk. Publisher’s Weekly noted that John Cloudie combines “fantasy, genetic manipulation, and a large dash of Patrick O’Brian to form a wonderfully satisfying tale of adventure.”

Jack Cloudie was published by Tor Books in March 2015. It is 410 pages, priced at $9.99 for both the paperback and digital editions. The cover art is by Trevillion.

Yeah, I share your skepticism, but I did enjoy all of the Jackals books. My personal favorite is Kingdom Beyond the Waves, which is a lovely steampunk-flavored lost race novel a la Rider Haggard.

(That’s one of the reasons I like the series — each book is kind of using a different sort of story as its basis; lost race, naval adventure, etc.)

Thanks Joe! This is the first one I’ve seen in paperback in the US… perhaps I just missed the others. I’ll have to track them down.