I’ve been anticipating Paula Guran’s monumental Swords Against Darkness anthology for over a year, ever since word started to leak out about the massive amount of research she was doing to make her selections (including reading every issue of Black Gate). The book was finally released this summer, but it wasn’t until last weekend that I was able to settle in with it.

And so far, it’s been a delight. It’s divided into three sections: Forging and Shaping, covering the canonical works that first defined the genre in the pulps (Howard, Vance, Leiber, Moorcock, and others); Normalizing and Annealing, those writers who followed in their footsteps (Tanith Lee, C. J. Cherryh, Karl Edward Wagner, James Enge, etc.); and Tempering and Sharpening, the modern writers who’ve brought something brand new (Joanna Russ, Samuel R. Delany, Saladin Ahmed, Scott Lynch). Paula offers a paragraph or two to introduce the authors and put each story in context.

There have been some terrific S&S anthologies in the last few years, from Jonathan Strahan & Lou Anders (Swords & Dark Magic: The New Sword & Sorcery, 2010), David G. Hartwell and Jacob Weisman (The Sword & Sorcery Anthology, 2012), and even Gardner Dozois (the upcoming The Book of Swords). But there hasn’t been one that balanced the old and the new so carefully, and so artfully.

Swords Against Darkness is essential to any serious student of modern fantasy. It’s also a heckuva good read.

Here’s the compete Table of Contents. 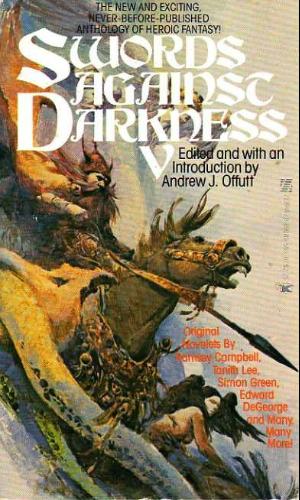 I was well pleased to see at least one story from Black Gate make the grade, Jame Enge’s “Payment Deferred” (from BG 9). If you had to select the best S&S tale from the 15-issue history of the magazine, that’s not a bad choice.

See all of our coverage of the best New Treasures here.

I read it this summer, and my only complaint was that it wasn’t the size of one of those VanderMeer monoliths. Seriously, it’s a first-rate collection and probably one I’d give to anyone I wanted to introduce to the genre. It has my favorite Clark Ashton Smith story, an excellent Leigh Brackett story, and Cherryh’s Thief in Korianth is, IMHO, a gem. All that plus Ahmed and Lynch and Enge and Bear? Yes, please!

Glad to hear you enjoyed it, Joe.

How did you think the new stuff stacked up?

Yet another book I will have to order after reading an article on this page. My copy of Empire of Imagination: Gary Gygax and the Birth of Dungeons and Dragons arrived today (I forget who mentioned it in an article, but thank you whoever you are). Now I definitely have to order this. Thank goodness they redid the bonus structure for my department at work so I’m making better money now.

The two stories I found most challenging were the Russ & Delany; and in both cases, I did enjoy them, but it took a bit of time to wrap my head around them, and now I plan to go read more of their work at some point.