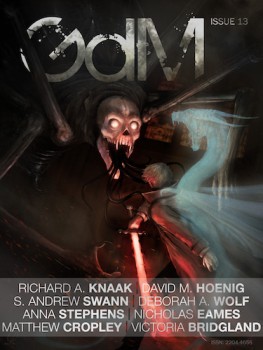 Things were a little thin on the ground for swords & sorcery this past month. Only  Grimdark Magazine crossed my radar this month with new tales of adventure, and three out of three in the latter publication weren’t S&S.

Grimdark Magazine #13 is packed with three stories and the usual spate of interviews, reviews, and commentaries on the subject of grimdark. If anyone will ever convince me that grimdark is a real, definable sub-genre and not just a marketing ploy, it will be the magazine’s editor, Adrian Collins. His choice of stories and non-fiction is solid and consistently presents grimdark as something far more than just gory rape and murder. In his magazine, there’s room for much subtlety and nuance.

The non-fiction is the usual magazine mix of good and poor. Though I disagreed with much of what he said, I enjoyed the interview with Nicholas Eames, author of Kings of the Wyld. Deborah A. Wolf has a fun article titled “How to Land a Rockstar Agent in Ten Excruciating Steps.”

Normally, I don’t write much about magazine’s non-fiction, but article in particular needs to be pointed out. In “Barbarians or Philosophers?,” Matthew Cropley and Victoria Bridgland make an argument that grimdark readers are a more discerning group than those who prefer more traditional fantasy. It’s more complex than that, drawing on things said by authors, as well as psychological studies, but that’s its general conclusion.

In the debate between those who love grimdark, and those who hate it, there is, I’ll concede, some evidence for either side. For those who claim that grimdark fans read because they enjoy the thrill that comes with depictions of violence, there’s some research, as noted above, to back this up. However, there seems to be much more recent evidence that supports grimdark fans gaining a deep fulfillment and enhanced personal well-being by engaging with grimdark fantasy. The dark and violent aspects of grimdark help it reflect the human condition in all its complex glory, whereas heroic fantasy is limited to an idealized portrayal of good and evil. Lack of material rewards and the unfairness and violence of grimdark worlds mirror our own, and help us see that the true rewards in life are increased wisdom and understanding of the nature of reality. Grimdark fans like the sub-genre because its anti-heroes share their high regard for justice and righteous vengeance, and that disposition means that the violence common to grimdark doesn’t detract from deep engagement with exploration of humanity, in all its glorious shades of grey.

I could spend an entire post unpacking the various claims made in that statement, but I’ll skip it that today. Suffice it to say, I disagree with most of what they say. Much of what passes for “increased wisdom and understanding of the nature of reality” is no more than easy cynicism and affected world-weariness. The only time I find humanity reduced to “shades of grey” is when I deliberately choose to filter out all the other colors of the spectrum.

Collins calls Issue #13’s first story, David M. Hoenig’s “Like a Curse,” as a weird western. More a vignette than real story, in it, the narrator, a gunslinger, faces his most dangerous opponent ever, a young woman who calls herself the Dust Devil. Unfortunately, she doesn’t know the narrator carries within himself a terrible secret she be better off avoiding.

“The Heavens Fall” by S. Andrew Swann is a gripping sci-fi horror story. When the bodies of fifteen women are found on his farm in upstate New York, feeble-minded Johnny Schaefer is unable to prove that Mosh Frazier must have killed them. Hell, he can’t even prove Mosh Frazier exists. As he moves through the justice system, we begin to read of something called “empathy treatment.” If convicted of the murders, Johnny will face one treatment for each body discovered. Most definitely not S&S, but definitely unsettling. It’s a reprint from the DAW 30th Anniversary Science Fiction Anthology.

The concluding tale, “Black City Shadows” by Richard A. Knaak, is part of his ongoing Black City Saint series. Set not in some mythical realm, instead it unfolds in 1920s Chicago. Black City is the name for the seamier side of the city, given in contrast to the extravagant White City fairgrounds built in 1893 for the World’s Columbian Exposition. 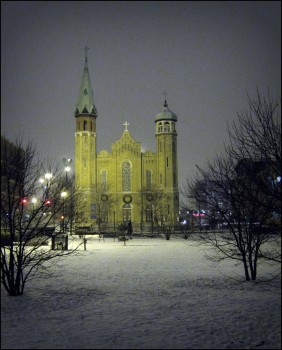 Nick Medea, is in reality Georgius, or St. George. For some unknown reason, after killing the dragon, he was condemned to serve as the guardian of the gateway between Earth and the realm of Feirie. The dragon he slew’s spirit resides within him, and in times of need he can draw on it for strength. Unfortunately, in 1871, when fighting Oberon, Nick lost control and the dragon burned down much of Chicago. He calls it “the Night the Dragon Breathed.”

Whenever someone in Chicago encounters something supernatural they are able to spot an otherwise invisible ad in the Tribune, and a phone number to call Nick. As the story begins, he has been summoned to St. Patrick’s Church by Father William. The priest spotted something dark and dangerous looking lurking in the shadows of the church’s ceiling.

Up above the last confessional, dangling from the ceiling, was a creature of nightmare with a head like a human skull, a torso akin to that of a black widow, and at least four visible limbs ending in human hands with dagger nails. The eyes were silver orbs without pupils and much too large for their sockets. Those eyes watched me with contempt, the Wyld not yet aware that I could see it.

I absolutely love this story (despite it not being S&S 😉 ). Knaak’s prose is fast and electric, and it builds an atmosphere brimming with suspense. Just when I assumed the story was going one way, it jinked and took another, unexpected, direction. The world building and the characters are fascinating. I want to read more to see just how Knaak develops his mix of Christianity and fairies. The story is totally complete and still left me with tons of questions, the sort that will probably make me buy the novel, Black City Demon.

I can’t say why, but I haven’t read any of the more popular urban fantasy. While I’m a huge Tim Powers and James Blaylock fan, that’s about it. I can see Knaak’s story changing that.

Grimdark Magazine has stuck around for three years now. It has consistently explored the boundaries of what grimdark can be and through its non-fiction, made consistent arguments for the validity of the genre. That they’re doing this publishing short stories in a field that is largely given over to multi-novel series is exciting. If you’re a fan of fantasy short fiction, definitely consider giving them a go.

For those who have missed my tales of woe, I’ve been struggling to get my house finished — well, my contractor has, but I’m the one getting agita. The past two weeks have been a mess, and that means I missed out on reading the latest issue of Swords and Sorcery Magazine. It’s only two stories, so you’d think I could have done it, but I didn’t. I’ll try to fit them in next time around, when I hope there’ll also be a new issue of Heroic Fantasy Quarterly. I’ll also have a new novella from Seth Lindberg.

Great post, Fletcher, thanks for taking the time to contribute during your personal angst. I hope it was cathartic in its way.

I am a Richard Knaak fan from his Dragonlance days, and I loved his own dragon realm, which had some terrific characters. I read the first Black City book…meh. He delivered a spectacular 1920s Chicago–atmosphere, language, etc., I was there–and terrific noir, but Nick…argggg! One of the most irritating protags I’ve read, whining all the time and actually stumbling through, being ‘saved’ far more by others than anything he actually did. Sorry–still irritating years later I see! LOL

Regarding GDM: I don’t read it, but your comment about disagreeing with what the author of Kyngs of the Wyld said during an interview really caught my attention–was it more of the sort of things the ‘barbarians vs philosphers’ article argues? Which I’m not even going to comment on.

Yeah, pretty much that. I’ll probably write a longer piece at STUFF I LIKE about the Barbarians article.