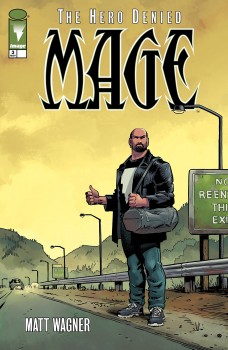 And so the story starts moving, just as the reviews and Internet buzz for this series begins to die down. Seriously, I’ve noticed how promotion for comic books tends to really ramp up with issue 1, but fades almost immediately afterward, as if no one might be tempted to pick up issue 3 if they hadn’t already read issues 1 and 2. Generally, by the time the last issue of a series shows up, the attitude among a lot of comic fans is “Oh, are they still publishing that thing?”

So you probably didn’t hear that issue #3 of The Hero Denied came out on Wednesday, but it did and it was good. Of course, some readers have probably been put off by the slow pacing of this story. For example, the first four pages are just Kevin talking to his son, Hugo, about the nature of magic while they walk around a car and then get inside it. And it turns out that my earlier theory was correct and these attacks are taking place in a parallel world just beside the “real world.” And while Kevin insists that his abilities aren’t hereditary, the fact that Hugo is able to slip into this parallel world would suggest otherwise.

The next six pages concern two Gracklethorn sisters, Aleksi and Sasha, visiting a mission in search of the Fisher King. As established in the very first Mage series, the Fisher King can assume any shape, but that shape will always appear crippled. I get that this is supposed to show how ruthlessly they’re pursuing their quarry, but it still seemed a bit implausible that these creatures were able to murder two people in a mission in the noisiest, sloppiest manner possible without anyone else noticing. On the other hand, Matt Wagner does a nice understated job of demonstrating Sasha’s powers of persuasion.

We then get two pages of Kevin explaining to his wife that he was attacked a second time, that Hugo saw the whole thing, and that they can’t take the attack from issue one as an isolated incident.

There’s another two pages of the Umbra Sprite speaking with all five of her Gracklethorn daughters and we get quite a lot of information in a dozen or so panels. Like all of their names, at last. Aleksi is the planner of the group. Karol is the “adept,” which I took to mean as a sort of apprentice magician. Zofia is a sadist. Sasha is the temptress. Olga is the muscle. And while I totally missed it, one of the letter writers pointed out that their physical appearances are based off of the Spice Girls. Evil pasty Spice Girls. Rather than hitting every homeless shelter in the city, Aleksi suggests that they just create their own shelter to lure the Fisher King to them.

The next six pages are Kevin explaining to Magda that the best solution to the continued monster attacks is for him to leave the family to draw the monsters away from them. And while I appreciate that Matt Wagner has based this character on himself, I’ve got to point out that that is a really stupid plan. You never split up the team when there’s a crisis. You call in all of your favors and bring in as many of your buddies as possible to your defense. Trying to do everything himself is what botched things for Kevin in the last volume and it’s sad to see him make a similar mistake here. When the bad guys kidnap his family (which they’ll inevitably do if every action movie I’ve ever seen is any indication) because he wasn’t there to protect them, hopefully there will be a mage present to point out that leaving them was a stupid decision.

We next get a page of the Umbra Sprite freaking out because, every time Kevin uses his power, she can feel it. And he’s been using it so much recently that she can now pinpoint his location. Yeah, that would seem to prove that Kevin should have abandoned his family, but it would have been better if the bad guys showed up at his house next issue, only to find a dozen heroes in his backyard, having a barbecue and waiting to smash evil.

It’s telling that the Umbra Sprite doesn’t wish to risk her daughters in a direct fight with Kevin, instead stating that they should stay where they are and she’ll summon some other monster to fight him. The last two pages are Kevin sitting on a bus stop bench and waiting for that monster to find him.

And yeah, I can see how this might seem like a lackluster issue if it’s the first one you ever picked up. And this series will probably read better if you wait until it’s all collected in one big trade paperback. But if you do that, then you’ll miss the letter pages. Either way, as individual issues or a complete volume, this story is definitely worth reading from the first volume.