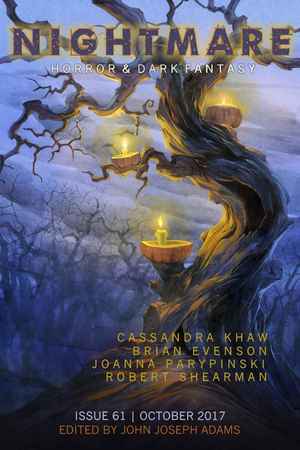 If you’ve never tried Nightmare magazine… well, let’s face it, what better time than October? The latest issue has a nice assortment of creepy tales, including Joanna Parypinski’s “We Are Turning on a Spindle,” a short fable about a traveler who tirelessly searches the universe for a very particular castle, with a legendary resident. The universe, it turns out, is downright lousy with castles.

After years of searching, he found the castle on a remote forgotten world in an abandoned corner of the unknown universe. Castles littered the cosmos like dead stars, relics of the ancients…

What is our hero doing way the heck out here?

There was no beauty left in the known cosmos, as far as he could see, and so he had ventured to the unknown cosmos… These are strange worlds that lie on the fringes, so old they may have existed before physics settled down with its proper rules.

Parypinski has a real gift for turning a phrase (“The interior of the castle was likewise ruined and decrepit, its diseased antediluvian stone like a scabbed wound”), and the tale is short, about 2,400 words. While the prose is sparking and new, the tale is a very old one indeed, and the ending isn’t hard to predict. That’s sort of the point, I think, and the horror of the climax isn’t diminished by our ability to see it coming. Check it out here.

The October issue of Nightmare also contains original fiction from Cassandra Khaw, and reprints by Brian Evenson and Robert Shearman.

There’s also an editorial from John Joseph Adams, with all the latest news on upcoming titles from John Joseph Adams Books, including the Hugh Howey collection Machine Learning, and Molly Tanzer’s second novel Creatures of Will and Temper, plus the latest installment of “The H Word,” in which Kristi DeMeester shares her thoughts on horror. There’s also author spotlights, and a feature interview with Josh Malerman.

The complete contests of the issue are listed below.

“Don’t Turn On The Lights” by Cassandra Khaw

Stories are mongrels. It don’t matter whether they were lightning-cut into stone or whispered over the crackle of a dying flame; no story in the world has pedigree. They’ve all been told and retold so many times that not God himself could tell you which one came first. Yes, every story in creation. Including this one. Especially this one. You might have heard it before. There was a girl once. Her name was Sally. It could have been any other name, really. But let’s go with Sally. It’s solid. Round-hipped and stout, the kind of Midwestern name that can walk for hours and don’t mind it much when the sun burns its skin red.

“We Are Turning on a Spindle” by Joanna Parypinski

After years of searching, he found the castle on a remote forgotten world in an abandoned corner of the unknown universe. Castles littered the cosmos like dead stars, relics of the ancients. Each one of these monuments to Ozymandias divulged the secrets of its womb with labyrinthine corridors or arresting garrets, grown mausolean with the passing of ages. A bloated sun swelled over a third of the enflamed sky, casting vegetation and ruins alike in ominous red. 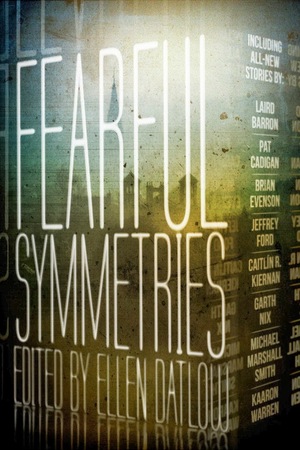 He had been given a notebook to write in, and the lawyer had loaned him a brushed-steel mechanical pencil with golden accents that he claimed were real gold. “I am loaning you this,” his lawyer told him when he handed it over, “so you will know how important and serious the matter is, and so you will do your best to remember everything you possibly can and write it all down as it actually happened.” The lawyer leaned down close and looked at him without blinking, his eyes steady. He doesn’t blink as much as normal people do.

Everything she taught she’d learned from the books in her father’s study—and even then, only from the bottom shelves—she couldn’t have reached the top shelves without the ladder, and the ladder’s wooden rungs were lined with cracks that looked like spider webs. So, no geography, then (but her pupils would be English, so how much did they need to know about foreign lands?). Plenty of history—she liked the way the past could be packaged into neat little romances; they were like fairy tales but the difference was, these fairy tales were true.

The cover this issue is by Alexandra Petruk / Fotolia.

Nightmare is edited by John Joseph Adams. This is the 61st issue. Subscriptions are available for just $1.99 per issue, single issues are available in multiple digital formats for $2.99. Purchase copies and sample free content at the website.

We last covered Nightmare with the July 2017 issue.

See our October Fantasy Magazine Rack here, and all of our recent Magazine coverage here.