While I was wandering the aisles of the Windy City Pulp and Paper Show here in Chicago last month, I came across a delightful find… the second volume of Steve Davidson and Jean Marie Stine’s The Best of Amazing Stories, covering 1927 (above right). I snatched it up immediately, and hunted up the first volume online (above left).

My fascination with Amazing Stories began with Isaac Asimov’s biographical anthology Before the Golden Age, in which he collected his favorite pulp SF stories. Asimov noted that Amazing had the best reputation at the time, saying “It was Amazing Stories all the way with me.” But there hasn’t been much attention paid to the early days of perhaps the greatest SF magazine, so I was very pleased to see an anthology series that attempts to collect the best of the Grand Old Lady of the pulps, year by year.

The first volume includes Murray Leinster’s “The Runaway Skyscraper,” A. Hyatt Verrill’s “Through the Crater’s Rim,” G. Peyton Wertenbaker’s “The Man from the Atom,” and much more. Gernsback included a lot of reprints in the first year of Amazing, and that’s reflected in the Table of Contents. 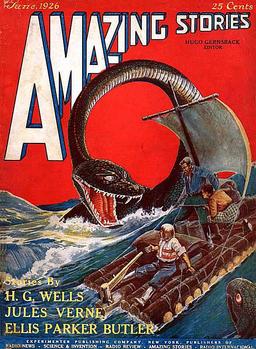 The editors also include the interior illustrations, including work by Frank R. Paul and F. S. Hynd. Here’s the description.

A unique collection of classic science fiction tales selected from the first year of the very first science fiction magazine. 1926 was a very good year, at least for speculative fiction, as this anthology proves. The Best of Amazing Stories: the 1926 Anthology is the first of a year-by-year showcasing of the best stories selected from each year of the publication’s celebrated history. Our 1926 selection presents work by such distinguished practitioners of the craft as multiple Hugo Award winner Murray Leinster, Gernsback Award winners H. G. Wells, G. Peyton Wertenbaker and A. Hyatt Verrill, screen writer Curt Siodmak, the controversial Austin Hall, and others. Stories include “The Runaway Skyscraper,” “Whispering Ether,” “The Man from the Atom,” “The Eggs from Lake Tanganyika,” “In the Abyss,” “Through the Crater’s Rim,” and more. To be followed by The Best of Amazing Stories: the 1927 Anthology.

And here’s the complete TOC: 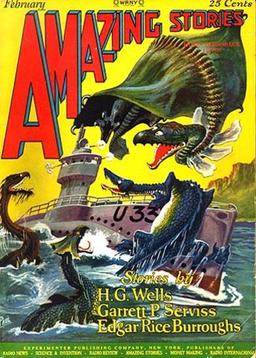 As enticing as the first volume is, the second is even better. It includes HP Lovecraft’s “The Colour Out of Space,” and tales by A. Hyatt Verrill, Francis Flagg, and many others.

1927 was a banner year for Amazing Stories. For Amazing’s second year, Gernsback knew he would have to find more new writers with up-to-date science fictional ideas. And in 1927, Gernsback succeeded in spades, introducing not only a bumper crop of new authors and fresh stories, but also four brand spanking new tropes, to the nascent world of science fiction. In 1927 A. Hyatt Verrill’s “Plague of the Living Dead,” wasn’t just another story of bloodthirsty zombies on the hunt, made more credible with a scientific rationale for their existence — it’s the first such story ever!

Pretty cool! But Gernsback was just getting warmed up. The 1927 Amazing Stories was also the first publication to introduce the work of the now-legendary fantasist H. P. Lovecraft to a mass audience. Though often mistaken as a writer of supernatural fiction, Lovecraft was actually a science fiction author, whose famed evil gods — the Great Old Ones such as Cthulhu, Azathoth, Yog-Sothoth, and Nyarlathotep — were not gods at all, but highly advanced aliens inspired by Lovecraft’s readings of the new discoveries of Eddington, Einstein, and other early 20th century scientists. But Gernsback wasn’t finished yet. He also introduced the work of a man whom the magazine’s readers would consider one of the leading science fiction writers of its first decade: Miles J. Breuer, M.D. Although physician Brewer would become famed for mind-bending stories of conceptual breakthrough, usually facing mortals with dimensional dilemmas — such as “The Gosstak and the Doshes” and “The Captured Cross-Section” — his debut in Amazing, “The Man with the Strange Head,” took a different tack and its appearance would mark the birth of yet another trope: that of a man who extends his life and strength through the creation of a mechanical body may also have served as a direct inspiration for Ironman’s suit. And fourteen months after his inaugural issue and only six months after he began his push to fill Amazing with new writers and stories, Gernsback introduced the first woman author to appear in the pages of a science fiction magazine, Claire Winger Harris — and she introduced “The Fate of the Poseidonia, the first story in which the Earth is saved not by a hero but a heroine, a pacesetter tale whose style, characterization and superior storytelling would only be equaled by the best of Amazing’s male writers during its first decade.

But, these four classics aren’t the only first-rate stories Gernsback could boast of in 1927, and in this anthology you will find six more bests from that year, including “Retreat to Mars” by Cecil B. White — an “idea story” with a kicker — and Benjamin Witwer’s “Radio Mates” which, unlike so many scientific-device-leads-our-hero-to-a-princess-in-need-of-rescue stories, offers a touch of romance between equals. Then, with “Advanced Chemistry” by Jack G. Huekels, we see not only the first story about chemistry in an sf magazine — but a story which has achieved a fame of its own in scientific circles, and been reprinted in scientifically-themed anthologies as well as textbooks over the years. Bob Olsen’s “The Four-Dimensional Roller-Press” is a dimensional romp, with a nod to Edwin Abbott’s Flatland, that proved so popular with readers that four further “Four-Dimensional” sequels were demanded. “The Machine Man of Ardathia” was one of the youthful Forrest J Ackerman’s favorite stories — and some years later he considered it a high honor to be allowed to collaborate with the author, Francis Flagg. Though bound to stir unease in many readers, “The Tissue Culture King” by biologist Julian Huxley (brother of Aldous), is easily one of the most gracefully written stories ever printed in a Gernsback publication. And, as a special treat for modern readers, we have paired each story with the original illustrations — most by the immortal Frank R. Paul, surely the first man to be paid to envision a new aspect of a new future every single day.

One thing I appreciate about these books is that they reproduce every cover for the year on the back, in beautiful color (click the images below for bigger versions.) 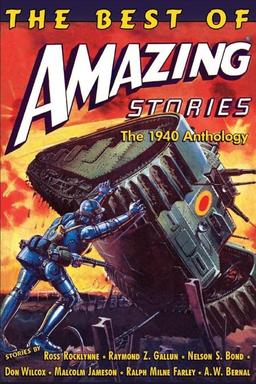 See the Amazing Stories website for more details. Steve Davidson is the editor of the current online incarnation of Amazing.

If you’re interested in Amazing Stories, I also recommend checking out Science Fiction Classics, a magazine which reprints pulp issues in their entirety. They’re reprinted over a dozen issues of Amazing so far. Read more here.

See all of our recent Pulp coverage here.

I hope this series makes it all the way up to the Cele Goldsmith years. In addition to the classics by Le Guin, Zelazny, Disch, etc., there’s a goldmine of lesser-known stories from that era that deserve to be rediscovered.

Indeed. On the other hand, that’s 30 years away! I’ll be ecstatic if it makes it to the late 30s.