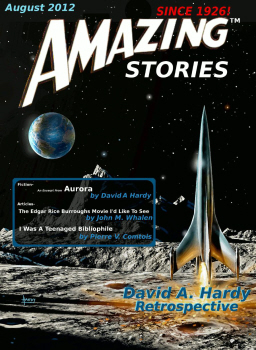 Here’s some Amazing news. Just think what the Golden Agers who wrote for this magazine back in the 1940s might wonder about an online pulp magazine?

Actually, one of them, Ray Bradbury, considered the Internet a “waste of time.” I guess his problem was he never spent any time on the Internet.

We don’t have any of Shakespeare’s plays that he wrote in his actual hand, but we do have the plays as transcribed by members of his acting troupe. These days, it wouldn’t be profitable to have an Amazing Stories magazine if it weren’t for the Internet. Even Uncle Ray would be down with that, wouldn’t you think? 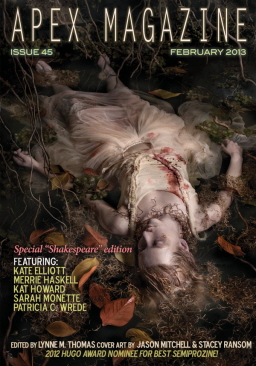 Speaking of the Bard and online magazines, I had two “minor” fields of study for my English M.A. (if you must know, or care, the major field was Rhetoric), which were science fiction and Shakespeare.

When I say that, some people think there’s a discipline called “Science Fiction and Shakespeare” and maybe there should be, as certainly the Elizabethan fantasist has inspired many a modern one.

Case in point is the latest edition of Apex Magazine, which is a Shakespeare-themed issue featuring the work of Kate Elliott, Kat Howard, Sarah Monette, Merrie Haskell and Patricia Wrede.