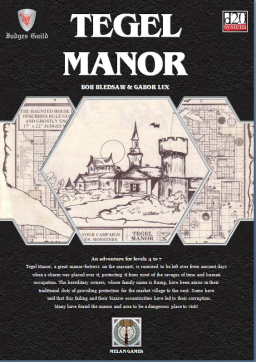 While I was assembling my Judges Guild article on Tuesday, I stumbled on an odd reference to a revised version of one of their earliest (and most famous) products: Tegel Manor. I’d never seen a copy however, and was pretty sure it didn’t exist, so I set it aside to investigate later.

What makes Tegel Manor so famous? I don’t think I could articulate its wonders as well as the talented James Maliszewski, author of the Grognardia blog; here he is:

Tegel Manor is without a doubt one of Bob Bledsaw’s masterpieces. Describing a sprawling 240-room haunted castle, the module is a textbook example of a funhouse dungeon, utterly lacking in anything resembling an ecology and filled with many encounters for which the adjective “whimsical” is charitable at best. The contents and/or inhabitants of each room are random — in some cases literally — meaning that, here you might find nothing more threatening than some giant beetles but next door you might find a Type III demon polymorphed as a kindly old beggar…

With its random encounter charts containing 100 members of the cursed and unfortunately named Rump family (all of whose names start with the letter R) and its goofy encounters (“Four Zombies … bowing to a Giant White Rat … in a pink cape and red plumed hat”), it certainly seems that way. It’s one thing to sidestep naturalism, but Tegel Manor goes above and beyond the call of duty when it comes to “gonzo.”

But the map is a thing of beauty. Nothing — and I mean nothing — has ever beaten it… It’s filled with winding passages, secret doors, mazes, empty rooms, weird features, and more.

James’s complete review is here. Tegel Manor was originally released in 1977, and revised and expanded in later editions. A little digging revealed that Necromancer Games had contracted to do an updated version for the Old School Renaissance market — and even produced the cover at right — but Judges Guild withdrew the rights before it saw the light of day. But that’s a story that deserves a post of its own.

As I mentioned a few days ago, I had a character who lived in Tegel Manor, but it was heavily modified. The map didn’t match the original. Not quite as much randomness or whimsy, but definitely bizarre when taking as a whole. No wonder the previous owner was *very* eager to sell it–give it away, actually.

No vampires–my character had a thing about vampires, so that was important–but just about all other undead found in the MMI, II and FF could be found somewhere in the house, cellars or crypts, including a lich and a demilich. There were also some odds and ends like a “mad scientist” archmage (who later became the second lich) and a greater devil trapped in a pentagram. Oh, and a nexus point into hell. Let’s not forget that.

This is where I learned the art of asymmetric negotiation. 🙂

When it comes to Judge’s Guild modules, I had the most Full On Golden Age of Roleplaying Fun with The Caverns of Thracia and (most especially) Dark Tower.

The adventures attained in Dark Tower were so staggeringly epic that my shaggy teen-age self didn’t even mind that BOTH of my characters died in what is probably the most spectacular combat climax I can recall.

Geez, all these years later and just remembering it is a pleasure. What other form of gaming has Fun Memories with a fraction of that kind of half-life?

Tegel Manor is good! My favorite though, is still Thieves Fortress of Badabaskor, any dungeon you can escape by learning how to fly a Pegasus is full of goodness. Runner up from the modules is The Glory Hole, Dwarven Mine, however Fontier Forts of Kelnore and <Shield Maidens of Sea Rune also hold many places of mystery, daring, and valor.

> just about all other undead found in the MMI, II and FF could be found somewhere in the house, cellars or crypts, including a lich and a demilich.

In the early days of role playing — at least for me — dungeons didn’t need to make sense on an ecological basis. They really were all about throwing my 6th level cleric up against all kinds of different monsters to see what he could do. The fun was in taking on a mummy or a lich (well, maybe not a lich), and having them all together in the same place made for a madcap adventure. That, and the opportunity for epic loot, of course.

I think that might have been part of the appeal of dungeons like Tegel Manor. You really never knew what was around the next corner.

> I had the most Full On Golden Age of Roleplaying Fun with The Caverns of Thracia and (most especially) Dark Tower.

You have excellent taste, sir! Both CAVERNS OF THRACIA and DARK TOWER were written by Paul Jaquays, and they stand up very well today. They’re fine adventures, and DARK TOWER even made Dungeon magazine’s “30 Greatest D&D Adventures of All Time,” the only non-TSR/WotC product to be so honored:

Have you ever seen the Runequest module with the same theme, DUCK TOWER?

> My favorite though, is still Thieves Fortress of Badabaskor, any dungeon you can escape by learning how to fly a Pegasus is full of goodness.

Yes indeed, another fine Judges Guild re-make done by Goodman Games in 2007. Although I admit a fondness for the original version as well.

> Runner up from the modules is The Glory Hole Dwarven Mine

Now that’s one I’m less familiar with — one of Judges Guild’s rarer offerings, as I understand it.

> however Fontier Forts of Kelnore and Shield Maidens of Sea Rune also hold many places of mystery, daring, and valor.

Fontier Forts of Kelnore was an early favorite of mine as well. You’re a man of fine taste, sir.