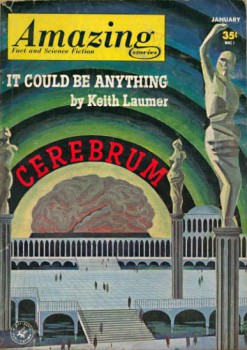 This issue was published almost exactly 50 years ago. This was well into Cele Goldsmith’s tenure. Goldsmith is regarded now as one of the great magazine editors in our field’s history, for what she did with Amazing and Fantastic from December 1958 through June 1965.

I immediately noticed the subtitle: “Fact and Science Fiction.” This appeared with the October 1960 issue and lasted through Goldsmith’s tenure (she was Cele Lalli by the end). 1960 was also the year Astounding Science Fiction became (starting with the February issue) Analog Science Fact and Fiction. Amazing may have been following Analog’s lead, or both may have been reacting to the Space Race, and the increased U.S. emphasis on science education.

Goldsmith/Lalli left the magazine when Ziff-Davis, her employers, sold it – she stayed on with Ziff-Davis and became a very successful editor with Modern Bride.

The cover is by Lloyd Birmingham, an unfamiliar name to me. I didn’t like it very much. As John Boston puts it: “an attempt at pompous pageantry that just looks silly.” It illustrates the lead story, “Cerebrum,” by Albert Teichner.

Interiors are by Birmingham, Leo Morey, George Schelling, and the great Virgil Finlay. There are a couple of inhouse ads, a Classified section, and two full page ads, one for the Rosicruans, and one for the 1963 Stereo/Hi-Fi Directory.

The Fact content is represented by Ben Bova’s article, “Progress Report: Life Forms in Meteorites,” the subject of which seems clear enough, though the article actually discusses the discovery of chemicals possibly related to life in meteorites, as well as where meteorites come from.

The Editorial (signed by Editorial Director Norman Lobsenz) also discusses  this subject, in particular a recently invented machine to analyze extraterrestrial rocks for signs of life. 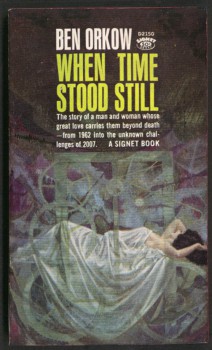 The other features are Coming Next Month (lead novella by Daniel Galouye, profile of Arthur C. Clarke by Sam Moskowitz, article by Philip Jose Farmer); and the letter column, “… Or So You Say”, which, among other letters, has one from Jerry Page rebutting a previous writer’s complaint that Moskowitz had not yet profiled Eric Frank Russell, as well as one from (naturally!) Philip Harbottle, asking for reprints and/or a profile of John Russell Fearn, who had died in 1960 (quite young, only 52).

Also a book review column, The Spectroscope, by S. E. Cotts (a name I do not recognize). Cotts did the review columns for Amazing and Fantastic from late 1957 through early 1964. The SSDI shows one “S. E. Cotts” of about the right age, an Arizona woman, but this seems more likely to be a pseudonym – some have suggested that Goldsmith herself wrote the reviews, or that her sister may have done them. (Shades of “Floyd C. Gale”, Horace Gold’s brother, who wrote book reviews for Galaxy from 1955 through 1963).

This month’s column begins with a vicious review of When Time Stood Still, by Ben Orkow. Likely the viciousness was well earned – the book is completely forgotten. But it seems odd to bother to lead off with a review of such a minor (and bad) book by a relative obscurity.

Cotts also reviews, together, Brain Twister by “Mark Phillips” and Unwise Child by Randall Garrett, making much of some similarities between the two before revealing that “Mark Phillips” is a pseudonym for Garrett writing with Laurence Janifer.

Also reviewed is Shards of Space, a Robert Sheckley collection, plus there are very brief mentions of reprints of Poul Anderson’s The High Crusade, Ray Bradbury’s The Martian Chronicles, The Best from Fantasy and Science Fiction (Seventh Series), and some of Edgar Rice Burroughs’s books.

So, the fiction. The lead story, as mentioned, was “Cerebrum,” by Albert Teichner (6,500 words). This is about a future in which everyone is connected by Central Switching, a sort of AI, that also acts a bit like our Internet. A man and his wife start to have problems connecting to Central, which leads to their ostracization from society, but eventually their salvation, as they become more able to think for themselves, and able to adapt when the problems with Central are revealed as internal to the system itself.

Not a terrible idea for a story, though I didn’t think it all that well executed. Teichner published about 10 stories in Amazing/Fantastic in the Goldsmith years, as well as a few for If, then popped up with a few in the early ’70s for Orbit and F&SF. I can’t find anything else about him. 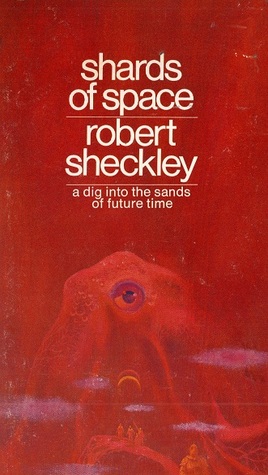 The other shorts include a very short (1,600 words) piece by Jack Egan, “Cully,” about a man sent at terrible cost to defeat predatory plant-creatures on Venus. Egan is the official Little Known Writer this time – he had only three stories, all in Goldsmith’s magazines in 1962/1963. (I suspect the 2007 covers for the SFWA Bulletin the ISFDB credits to him may be from a different Jack Egan.) Also there is a nice Sonya Dorman piece, “The Putnam Tradition” (2,500 words), about a long line of interesting talented women and their weaker husbands.

This story is signed “S. Dorman”, by the way, as with a few of her early pieces, though she soon began using her full maiden name. She ended up publishing about 25 stories between 1961 and 1980, including one in Cosmopolitan, the rest in the SF magazines. I liked her work a lot, especially “When I Was Miss Dow” and the Roxy Rimidon stories.

There was a Roxy Rimidon novel, Planet Patrol, which I haven’t seen – I wonder if it is a fixup of the stories. (Denny Lien reports that it is either an expansion of the first RR story, or perhaps a fixup/expansion of the first two.) She was ultimately better known as a poet, and I really like those of her poems I’ve seen.

There is one original novelette, “It Could Be Anything,” by Keith Laumer (13,500 words), in which a man leaves his boring, stultifying town and ends up in a mysterious city populated mostly by “Golems,” and apparently run by formless aliens called Gels. He meets a couple of other people, one of whom comes from an entirely unfamiliar Earth-like milieu; and eventually tries to learn what’s behind this strange place. It’s a rather overtly Phil Dick-influenced piece, and it’s somewhat interesting, but also uneven.

And finally, there is one reprint, “Omega, the Man,” by Lowell Howard Morrow (12,500 words), from exactly 30 years earlier (the January 1933 issue of Amazing). Morrow, we are told in Sam Moskowitz’s introduction, also published a few “scarcely distinguished” stories in Air Wonder Stories.

Moskowitz praises the story highly, and you can see that it has a certain ambition, and that it aims at a “Twilight”*-like grandeur of affect, as it tells of the last two humans on a dying Earth, in an already basically dead Solar System, battling a sort of plesiosaur/brontosaur hybrid for control of the last water on the planet, leading eventually and inevitably to extinction. The problems are the prose, which is unremittingly dreadful; the stilted characterization; and, really, the triteness of the ultimate vision.

(*I am referring here, of course, to “Don A. Stuart’s” (John W. Campbell’s) Hall of Fame story, not to Stephanie Meyer’s novel.)