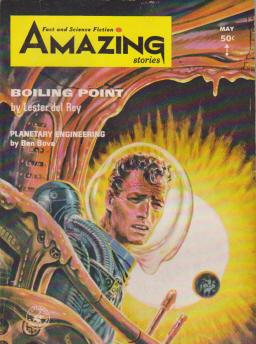 Here we are fairly late in Cele Lalli’s tenure, an issue with an impressive set of names on the TOC, but mildly disappointing overall content. The cover is by Ed Emshwiller, illustrating Lester Del Rey’s “Boiling Point”. The interiors are by George Schelling and Virgil Finlay.

The editorial, from Norman Lobsenz as usual, discusses with some concern the possibility of manipulation of people’s genetic material… then adds two silly Benedict Breadfruitian puns on the subject of the proper pronunciation of Lobsenz (Lobe-sense, it seems).

Ben Bova contributes a science article called “Planetary Engineering”, about prospects for building a base on the Moon. (Future articles in the series will cover more extensive “planetary engineering”, including terraforming other planets in the Solar System.)

Robert Silverberg’s book review column, The Spectroscope, covers Philip K. Dick’s The Game Players of Titan (which he judges as decent, but a disappointment relative to the best of Dick’s work), Doc Smith’s Skylark 3 (regarded by Silverberg as rather bad, though Doc is praised on personal grounds), and John Campbell’s anthology Analog 2 (he considers it very uneven, with one excellent story, a couple decent ones, and some weaker stuff). I will add that I agree with Mr. Silverberg on all points. 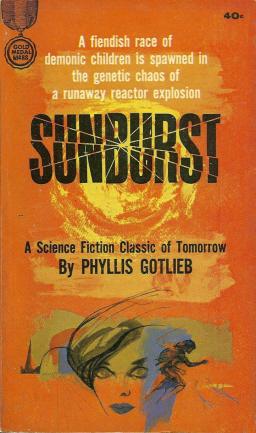 That’s a list full of at least mildly well-known writers… C. C. MacApp (real name Carroll M. Capps) is probably the least known, and he published a couple of dozen stories and seven novels in a career that extended only from 1960 until his death in 1971.

Phyllis Gotlieb was born in 1926 in Toronto, and died in 2009. Sunburst was her first novel, and it has a good reputation, though I confess I’ve never read it (the theme — mutants as a result of a nuclear accident — doesn’t thrill me, and one review I read, while praising Gotlieb’s writing, suggested it was a bit creaky in today’s terms as to the idea, and as to some other dodgy aspects). Gotlieb wrote a number of further novels, and a lot of poetry as well. She is a very significant figure in the history of Canadian SF.

The Sunburst Award, for the best book-length work of Speculative Fiction by a Canadian each year, is named for this novel.

“Boiling Point” is a scientific puzzle story, in which a man whose main job is to study “energy-eaters”, mysterious phenomena which have been messing with the Solar System for some time, is forced to waste his time on a routine satellite maintenance job… No points for guessing that one of the problems he encounters fixing satellites is caused by energy-eaters, and that his expertise comes in handy. I have to confess that save for “Nerves” and maybe one or two further stories, Lester Del Rey’s fiction output leaves me very cold indeed, and this story seemed to me similarly unimpressive – competently executed, perhaps, but very minor.

There’s a story behind it, however, a very interesting one. I originally posted this review on a mailing list frequented by a number of experts in SF history, including Robert Silverberg. On seeing the mention of “Boiling Point,” Silverberg remembered something he hadn’t thought about in years. Lester Del Rey had accepted a commission to write a story based on the Emshwiller cover for this issue, but (a problem which bedeviled Del Rey his whole life) he found himself blocked, and asked Silverberg to ghost the story for him.

Silverberg complied. This is the time when Silverberg was returning to SF with stories of increasing ambition and power – the stories that cemented his reputation were just around the corner – but for a ghosting job he (not surprisingly) turned out a story more typical of his prolific late-50s work: competently done but nothing special. Anyway, add another pseudonym to the long list that Silverberg used! 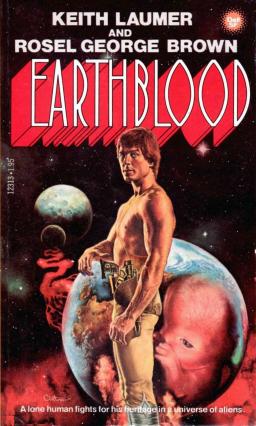 “The Crime and the Glory of Commander Suzdal” is one of Cordwainer Smith’s later stories, and an odd one. Commander Suzdal is sent on a mission to the outermost reaches of the Galaxy, where he encounters a distress capsule from Arachosia. He is lured to that long lost planet, only to find their terrible fate: a disease has killed all the women, so it is a warlike planet of only men, who regard women as “deformities”. Suzdal needs to find a plan to keep them from invading the Instrumentality, but his trick (involving cats and time travel) violates Instrumentality law, so he is condemned. (And in fact he was a character in Smith’s earlier story, one of his best known, “A Planet Named Shayol”, about a prison planet.)

This is a decidedly weird story, with some disquieting aspects (the treatment of the all-male planet is a lot less uplifting than, say, Lois McMaster Bujold’s treatment of Athos), and some implausible aspects, but it also has some of the incantatory power Smith always strove for.

I have discussed Rosel George Brown in these reviews before: a intriguing writer who died way too young (aged 41, in 1967). She began publishing in 1958, and published about 20 stories and two solo novels, the latter about a detective named Sybil Sue Blue. She also published a collaboration with Keith Laumer, Earthblood. “The Artist” was her last published short story. It’s an ambitious effort that for me didn’t quite come off. The artist, who seems a sort of idiot, paints pictures of how his wife reacts to strange things. The story is mainly set at a party with some pretentious guests, and concludes by one guest observing his very odd new painting, and the artist ending up somewhere weird… which I admit I just plain didn’t get, so maybe it’s me, not the story.

Harry Harrison’s “According to His Abilities” is a slight story about a couple of space navy types going to a world to rescue a man who has been kidnapped by the natives. One of the rescuers is a violent blowhard who insists the aliens will only react to displays of force, the other is a more contemplative type, presumably in favor of negotiation… obviously, there’s a twist here, kind of silly but amusing enough for a back of the book sort of story.

And finally C. C. MacApp’s “For Every Action” is kind of trivial. A Soviet spaceship in the area of Pluto rescues and American from a disabled ship who propelled himself to the other ship by shooting arrows. And that’s pretty much the story (there is some unconvincing joking blather about how the Soviets will react …)

Rich Horton’s last retro-review for us was the February and March 1953 issues of Astounding Science Fiction. See all of Rich’s retro-reviews here.

The Del Rey background information makes me wonder if he’d done that with other stories. Or was this an isolated incident?

I can’t cite chapter and verse just now, but I’m pretty sure that some novels published under Del Rey’s name were ghosted … Wikipedia says THE RUNAWAY ROBOT was written by Paul Fairman from a Del Rey outline. I can’t point to any other stories.

Is there any reason to question whether del Rey wrote Outpost of Jupiter or Day of the Giants — books I remember from when I was a kid?

According to the ISFDB (not always reliable) Fairman also ghosted SIEGE PERILOUS, TUNNEL THROUGH TIME, THE SCHEME OF THINGS, and PRISONERS OF SPACE.

They list OUTPOST OF JUPITER and DAY OF THE GIANTS as by Del Rey, though who knows for sure?

Gah! Seriously? THE RUNAWAY ROBOT was one of the most beloved novels of my childhood. I gave it to my children to read when they were the same age I was.

Who is this Paul Fairman character?

[…] Horton’s last retro-review for us was the May 1954 issue of Amazing Stories. See all of Rich’s retro-reviews […]