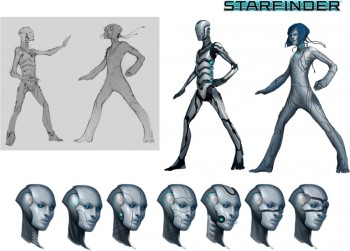 The dividing line between fantasy and science fiction can be difficult to define. I’ve been on convention panels on the subject a few times, at both ConFusion in Detroit and Windycon in Chicago, and have been in the audience of even more of them, but never once have I seen a group of people fully agree on where that diving line is, or even that such a definition exists. The genre is so fluid, including settings with science so fantastic and magical systems so dogmatic that the dividing line seems impossible to lay out. Many of us are fans of both and always have been, though perhaps we appreciate science fiction and fantasy for different reasons, regardless of how we define them.

This weekend, at PaizoCon, the creators of the Pathfinder RPG announced that they would be happily dancing along this boundary with the new Starfinder RPG. With the Starfinder RPG Core Rulebook slated for an August 2017 release date, it looks like this will create whole spacefaring options set in the distant future of the Pathfinder setting, as described in the announcement blog post:

Starfinder is set in Golarion’s solar system, but far in a possible future—one in which the gods have mysteriously spirited Golarion away to an unknown location, and refuse to answer questions about it. In its place, the cultures of that world have evolved and spread throughout the solar system, especially to a vast space platform called Absalom Station. Gifted access to a hyperspace dimension by an ascended AI deity, the residents of the system suddenly find themselves with the ability to travel faster than light, and the race is on to explore and colonize potentially millions of worlds. But there are horrors out there in the darkness…

We’ll try to keep you up to date with new announcements as they become available, particularly closer to the 2017 release date. The definitive place to keep tabs on the development of the Starfinder RPG, and to possibly hear about playtest opportunities, would be at the new Starfinder Forum over at Paizo.com.

As great as this is, it’s worth noting that this isn’t Pathfinder’s first foray into overlapping their Pathfinder campaign setting with science fiction. The planet Golarion includes the nation of Numeria, the location of an ancient meteor (and more) shower, and resulted in a lot of crashed superscience technology that, over the years, has sometimes been discovered and activated. Though discussed in various materials, including the Inner Sea World Guide (Paizo, Amazon) Numeria entry, the real height of exploring this came during the Iron Gods Adventure Path (Paizo, Amazon), a campaign scenario in which characters become deeply involved with the war to control this vast super-technology. Nor have these been the only instances of Pathfinder exploring its sci-fi side: 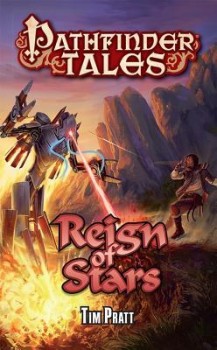 James L. Sutter, the Creative Director of Starfinder, is a longtime friend of Black Gate. (Yes, blogs can have friends.) You can see some of our previous interviews with him (here and here), as well as reviews of his novels in the Pathfinder Tales line, Death’s Heretic and The Redemption Engine, which chronicle the adventures of an atheist warrior sworn into the service of a god. With his hand at the wheel, I have little doubt that the end product will be well worth a year’s worth of anticipation.

In addition to announcing Starfinder RPG, Paizo also announced a number of other upcoming products recently. Each is surely worth a complete stand-alone discussion, but in the meantime, here’s the breakdown of what’s on the horizon:

As always, there’s a lot to look forward to coming out of the Paizo workshop, so get your D20s ready.

Interesting. Could this be the next Traveller?

I wondered how Paizo was going to deal with the “we need a new edition to sell a lot more books” problem major RPG systems face. Coming up with a new SciFi line on the PF mechanics is one response.

“Starfinder is set in Golarion’s solar system, but far in a possible future—one in which the gods have mysteriously spirited Golarion away to an unknown location, and refuse to answer questions about it.”

I’m basically “out” of active RPGing at this point. That said, Pathfinder was the last (really) good RPG I played, and Paizo did a masterful job of separating me from my coin. …BUT, and call me an ol’ curmudgeon here all you’d like, but…as a truly old school Traveller player, if I were to jump back into a Sci-Fi RPG, it would NOT be to play “Pathfinder in space,” thank you very much. Not saying it won’t work for Paizo, they are nothing if not master RPG makers and marketers, but as someone who cut his teeth on Arthur C Clark and C J Cherryh first, then fell into RPGs, I never had the slightest interest in “(p)orcs an’ elves in space.”

But if anyone can pull it off, Paizo certainly can 🙂

I suspect that their worlds will be as rich and diverse as the various nations of Golarion, which can classic fantasy quests, dinosaur hunting, superscience, steampunk, wild/weird west, piracy, oriental, military campaigns and kingdom-building … pretty much any sort of fantasy story you wanted to run, you could find a place on Golarion to run that story. Their Starfinder worlds will probably have everything from planetary romance to space opera to Spelljammer-style magic-meets-technology to merchant empires to cyber-worlds to salvage missions to space zombies and so on.

If it were up to me, I’d add some sort of excuse for there to be large regions of space where magic just doesn’t work.

Just at a glance, this sounds kind of exactly like what I wanted Spelljammer to be, but which it never was.