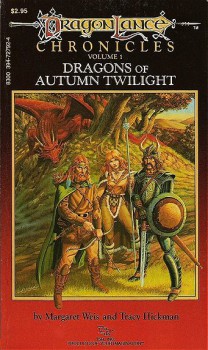 This week concludes Black Gate‘s interview with author and editor James L. Sutter with a discussion of the pros and cons of media-tie in fiction, the Before They Were Giants anthology which collects the first sale short fiction of many big name writers, and a look at what James is working on now. Be sure to check out parts one and two of this interview, as well as our review of James’ new novel Death’s Heretic.

You recently wrote an informative guest post at Inkpunks about the pros and cons of media tie in fiction from a writer’s perspective. What are your thoughts on media tie in books in general, from a reader’s perspective? They seem to be more popular than ever in stores, but would you say some of the reluctance or distrust many readers seem to have for tie in work is still an obstacle in the marketplace?

I think that science fiction and fantasy readers (the only genre I really feel qualified to comment on) have a love/hate relationship with media tie-in books. Many of us start out there–I know I read plenty of Star Wars and Dragonlance and Indiana Jones books as a kid. Tie-ins are a natural entry point into the genre, because those books deal with something you already know you like–movies, games, etc. Yet as we read further into the genre, I think many of us begin to associate those books solely with our humble beginnings. We fancy ourselves more sophisticated, and begin to define ourselves by our less mainstream tastes. Books with logos on the cover start to seem too lowbrow, or like blatantly commercial cash grabs rather than true art.

This, of course, is crap. Sure, there are plenty of bad tie-in novels out there–but there are plenty of bad novels out there, period. These days, tie-in novels are more widely read than most independent science fiction and fantasy, and as a result there are a ton of high-quality authors working in shared worlds–sometimes even folks who’ve already established themselves with their own original fiction. When folks like Greg Bear, Jeff VanderMeer, and Vonda McIntyre are writing tie-in novels, it seems a little silly to presume that the books will somehow be bad just because they feature a popular property. Hell, Neil Gaiman just wrote an episode of Dr. Who!

I think part of the problem comes from readers not understanding the publishing business. They imagine that an original book must be better than a tie-in book because the author spent years in isolation, carefully crafting her masterpiece without any motive besides High Art, while the tie-in book was forced to make all sorts of compromises. In truth, any author who’s trying to support herself has all sorts of additional pressures–paying rent, for one. For most of our genre’s existence, great books have been written on deadline, and few authors work in a vacuum–all editors and publishers have vested interests in how their books sell. While a tie-in novel may get extra editorial attention to make sure all the details and world canon are correct, in my experience, that’s usually good for the book.

It’s also worth considering that, when an author doesn’t have to invent a world from scratch, she has that much more time to spend on making the story and the prose as good as it can possibly be. And in the best-case scenario, the author is already a fan of the property, so everyone wins–readers get a story that’s totally faithful to the source material, and the author gets to play with toys she’s always coveted.

Is there still a prejudice against media tie-in books? Sure. But I think it’s slowly being eroded, and it’s my hope that folks continue toward the idea of judging each book on its own merits. 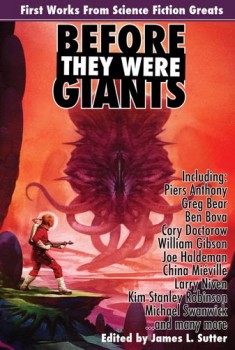 Before They Were Giants is an anthology with a rather unique premise — to collect the first short story sales from legendary authors. Tell us a bit about the genesis for that project, and how you got so many terrific names!

That one started with the fact that I’m a total junkie for writing advice and insider tips–even if I already know what somebody’s going to say, I enjoy hearing the way they say it, and I frequently find such things inspiring. It also came from the fact that being an author (especially a new author) can be extremely discouraging. Every time you read an excellent book, it’s easy to say, “Why am I even trying? There’s no way I’ll ever be that good.” It’s natural to want to compare yourself to your heroes, and in that context most of us will fall short, most of the time. Yet it’s important to remember that those literary greats didn’t spring forth full-formed like Athena. They had to work hard to get where they are. And that, combined with the popularity of rare B-side tracks from famous musicians, made me think that maybe there was a book here: a how-to-write book in which authors not only gave literary advice, but used their own early efforts as examples.

Bringing it together was easier than it had any right to be. Paizo had already worked with China Miéville on some RPG stuff, and both Ben Bova and Nicola Griffith were personal friends of one of our editors. I sent them emails, and once they jumped on board, well, who wouldn’t want to share a table of contents with those three? Each new author who signed on just upped the ante. Of course, there were many people who were unable to participate for various reasons–too busy, or deceased, or recently collected in anthologies or retrospectives with similar themes–but in the end I managed to get 15 authors who were both personal favorites of mine and who also had significant impact on the genre, from old-school masters like Larry Niven, Joe Haldeman, and William Gibson to newer folks like Cory Doctorow.

Before They Were Giants was designed primarily to be a teaching tool for aspiring writers, but I also think it’s simply a lot of fun to see where these giants came from. Some of them really do seem to have it all figured out from the beginning–folks like Ben Bova and Spider Robinson came out swinging, and already had all the elements that would later make them famous. Others are more modest. China was actually one of my favorite contributors, because when I asked to publish what I thought was his first story, “Looking for Jake,” he said “Sure… but let me show you the REAL first story.” And he pulled out a piece that seemingly no one else knew existed, which he had written when he was twelve and used to win a young writers’ award. I ended up including that story, and his interview is one of the most interesting in the book. 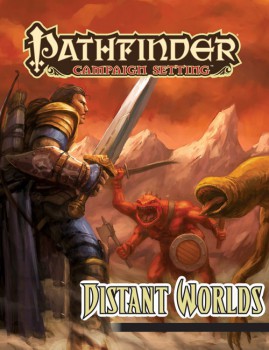 So what is on the horizon for you now, both at Paizo and with your independent work?

I just finished a prequel novelette for Death’s Heretic, a Salim story called “Faithful Servants.” That’s going to be available for free on paizo.com starting November 30th, and also in audio form as a free podcast over at starshipsofa.com. After that, my next release is an RPG book called Distant Worlds, in which I got to flagrantly indulge my love of science-fantasy mash-ups by detailing the numerous strange worlds of our campaign setting’s solar system.

On the ongoing projects front, I’m currently in the middle of writing a Pathfinder RPG adventure for the upcoming Shattered Star Adventure Path, a module set in my pet city of Kaer Maga. After that there’s another RPG project in the works that I can’t talk about just yet, and then it’s on to the next novel–with any luck, a sequel to Death’s Heretic, though of course that depends on how well folks like this one. And my fiancee and I are getting married next summer. It’s going to be a busy 2012!

Great talking to you, James, and thanks for the interview.

My pleasure, Bill! I should also note that if anybody wants to hit me up and talkfiction, games, heavy metal, or anything else, they can find me at www.jameslsutter.com or on Twitter at @jameslsutter. Thanks so much!

Great interview!
I remember polishing my (almost non-existent) english with “Indiana Jones and the White Witch”, “Dragons of Autumn Twilight” and “Curse of the Azure Bonds”, before discovering Gibson, Howard and the classics of genre fiction (another word which shouldn’t “seem too lowbrow”).
Also the Warhammer tie-in books are a good example of how a good editor, brings great writers on board (I was recently reading Ian Watson’s Warhammer 40K novels)…

By strange coincidence, I’m also currently reading Watson’s 40k novels. They’re really fun, doubly so because he gets away with so many ‘big idea’ things that just aren’t done any more.

I’ve taken a break halfway through reading “The Inquisition War” omnibus (http://www.isfdb.org/cgi-bin/pl.cgi?63918).
In his introduction for the new PoD printing of “Space Marine”, Watson admits doing a (very clever & entertaining) pastiche of Heinlein’s “Starship Troopers”. Maybe the same applies to his short ” Warped Stars”, this time I think, for van Vogt’s “Slan”…

I have yet to get a hold of ‘Space Marine,’ I just have the mass market reprints of the three Draco novels. Watson is wonderfully weird and inventive, and now I really want to track down Space Marine if it’s a part of the ‘Starship Troopers’ dialog (there are so many books written in response or homage to it).

I got my copy directly from the publisher (http://www.blacklibrary.com/Warhammer-40000/Space-Marine.html) and although it’s a bit costly, it’s probably the best Print on Demand quality I’ve read.
Also, if you manage to get a hold of an omnibus copy of the “Draco” books, you’ll find an interesting introduction from Watson (this time he reveals his intentions about those books, “baroque” if I recall…) and two inter-linked short stories. You’re spot-on with “weird & inventive”. I was reminded of Watson’s first book (“The Embedding” ’73 – http://www.fantasticfiction.co.uk/w/ian-watson/embedding.htm) about language, consiousness & first contact. It’s a meeting of styles, between A. Clark’s Hard SF and the New Wave writers’.