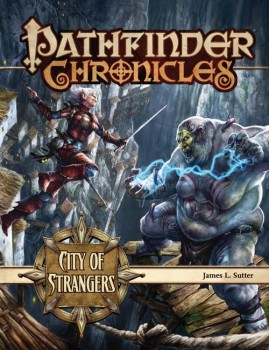 Last week we were just getting started in our conversation with writer James L. Sutter; this week we talk more about James’ role at Paizo, the balance between editing and writing, and his early history as a writer and gamer.

Tell us a bit about your role at Paizo — not only are you shepherding the fiction line, but, as you mentioned, you’re the guy that makes sure the world stays consistent.

I’ve been at Paizo for about 7 years now, so I’ve worn a lot of different hats. At the moment, I’m the Fiction Editor, which means I’m the guy in charge of finding authors, commissioning stories and novels, developing them, solving any continuity issues, and doing much of the editing (though I’m backstopped by several other excellent editors). In addition to that, however, I still do a ton of development for the game products, usually as they relate to the world and continuity–I had the good fortune to already be on the creative team when we started Pathfinder, so while the company’s grown since then, there are a few of us who have followed and shaped the world’s expansion since the beginning.

Last but not least, I also get to do a fair bit of straight-up design work for Paizo: not just editing and developing freelancer content, but writing books and articles as a freelancer myself, which gives me a wonderful chance to create sections of our world out of whole cloth. Probably my favorite books that I’ve worked on are the two that I’ve done solo, a book called City of Strangers, which was essentially a travel guide to an anarchic, Mos Eisley cantina-style city that I invented, and Distant Worlds, which comes out in February and details the other planets in our world’s solar system. (The latter was a nice chance for me to kick back and indulge my blatant love of science fiction within the bounds of our fantasy setting.)

The Pathfinder Tales line has been around for about a year, how would you say it compares to your expectations when the project was first initiated? What books will we be seeing in the near term (aside from Death’s Heretic that is!)?

It’s going strong! We’ve always had high hopes for the line–after all, we all grew up reading gaming tie-in books–and so far we’ve been pleased at the progress. It’s always a challenge starting a new fiction line, but fortunately Pathfinder’s got a lot of devoted fans that give it a solid foothold, and every book sees a bit more attention than the last. I also feel extremely fortunate in the caliber of authors I’ve been able to get working for us–it’s been important for me to pull the best folks I can find from both the gaming and “literary” fantasy communities, as I really want to get past any prejudices folks may have about shared world fiction and help them realize that we aren’t trying to make books that are just not good for a tie-in line–we’re trying to make great fantasy novels, period. To that end, I think Howard Andrew Jones (a longtime editor of Black Gate), Dave Gross, Robin Laws, and Elaine Cunningham have all done fabulous jobs. And I’m constantly trying new folks out with our free online short stories, which we illustrate and serialize every week for free at paizo.com/pathfindertales/serial–all of our archives are up there for free as well if folks want to check it out, and I’m really proud that we’re able to offer that sort of top-tier content for free.

Coming up, we’re going to be pulling even harder from the literary fantasy world, with some names you might recognize. Next on our schedule is Song of the Serpent by Hugh Matthews–one of many pseudonyms used by longtime fantasy and science fiction veteran Matt Hughes, who a lot of folks have called the literary successor to Jack Vance. In true Vancian style, that one follows a fast-talking scoundrel as he’s given the choice between being executed for thievery and going on a secret mission that may be even worse. After that, we’ve got Hugo Award winner Tim Pratt doing a book called City of the Fallen Sky, which is all about exploring an ancient flying city crashed in the jungle. And after that, the last one I can talk about just now is Nightglass by Liane Merciel (who you may know from her well-received debut novel River King’s Road) who’s doing an awesome story about a young shadowcaster raised in an evil nation devoted to a sadistic god, and who has to come to terms with who or what he wants to be in a sort of fantasy version of Dances with Wolves. All together, I’m extremely excited about the next year for the line!

Sometimes it can be hard for a writer to turn off the ‘editor’s eye’ — and perhaps doubly so when that writer is actually an editor! With so many roles to juggle, do you ever find it tough to transition from one to another?

Oh yes. I’ve known a lot of editors who have that problem–if they start reading their stuff before it’s done, they get terribly sidetracked by editing what’s there instead of creating new words. I’ve certainly wrestled with it myself. There was a time when, in order to keep the momentum going on a story, I would turn my chair 90 degrees from the computer and type sideways so that I couldn’t see the screen. Other times I’d close my eyes. In fact, there have been several short stories where if you’d walked in on the writing process, you would have seen me sitting in my bedroom with the lights off, eyes closed and body all twisted away from what I was typing. Possibly nude, depending on the time of day. Anyone who thinks of writing as a romantic lifestyle obviously hasn’t seen enough writers at work.

Nowadays, as long as I’m in a steady writing groove and remember roughly where I stopped, I simply refuse to let myself read more than a paragraph or so back from where the blank page begins. The goal is just to produce words, good or bad, with the understanding that I can edit them later. Strangely, though, I usually end up being pretty happy with my first drafts. I don’t subscribe to the theory of some writers that you should never revise–I think that, in general, you can pick out those authors pretty quickly by the quality or consistency of their work–but overall, once I quit worrying about making every word perfect and give myself the freedom to just write, things flow a lot easier. It all comes down to not psyching yourself out. Don’t worry about writing the greatest story that ever was, or let yourself think about the huge novel you’re embarking on. Just write. And tomorrow, write again. 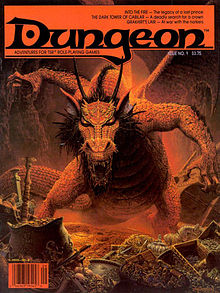 What came first for you, love of gaming or love of fiction? How much did one influence the other — could you see yourself having become a writer and editor if not for gaming?

Writing, and particularly fiction, will always be my first and greatest love. Some of my earliest memories are of pounding away at a typewriter, turning out ten-page “novels” with copious chapter breaks. Gaming came later, and while I enjoy it, the fun of gaming has always been in the world-building, character development, and storytelling–in other words, precisely what I love about fiction. I actually hadn’t gamed regularly for many years when I started at Paizo–I fell in here because I’d been working as a journalist and growing dissatisfied with it–I loved writing, but I didn’t care at all about reporting–and when I stumbled across Dungeon and Dragon magazines, it seemed like the closest I could come to writing fiction while still getting paid. Once I started working on the magazines, I rediscovered gaming again, and have been playing ever since. But all the while, I was still publishing fiction with various small presses.

That said, there’s no question that working in gaming has been the single biggest windfall of my writing career. I’ve learned so much about writing here–everything from how to construct an interesting world and polish your prose to how to pace yourself on book-length projects–and I’m constantly inspired by the creativity and talent of my coworkers and industry comrades. I’ve had the opportunity to observe the writing industry from the editor’s side of the desk, and to learn what works for authors and what doesn’t. Plus, by writing game books, adventures, and now a novel in worlds people already cared about, I’ve been able to get my stuff in front of folks who might never have otherwise read it. And every step of the way, I’ve been able to learn from (and sometimes with) some of the best in the business. I’ve been extremely fortunate.

Join us next week for the final installment of this interview in which James talks media-tie in fiction, Before They Were Giants, and what’s on his horizon.

[…] big name writers, and a look at what James is working on now. Be sure to check out parts one and two of this interview, as well as our review of James’ new novel Death’s […]