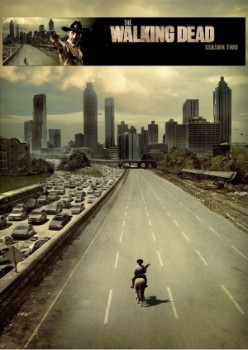 Season 2 of AMC’s The Walking Dead is nearing its midseason point, and apparently it sucks, at least according to a vocal minority of viewers. Why? Too much talking and not enough action. With a name like The Walking Dead, each episode should be wall-to-wall flesh munching zombies and humans gunning down undead with head shots on the wing. Or so the detractors say.

Me? I’ve been enjoying the heck out of the series, and think it’s pretty darned perfect as far as serialized television goes. The Walking Dead isn’t just about zombies. It’s also a human drama, and I’m hooked.

But I guess characterization and engagement with philosophical and moral questions aren’t what the zombie diehards want. Here’s a real sampling of some of the comments I’ve found:

Boringggggggggggg. who cares about the season finale now, season 2 is a flop

I was dreading what was going to happen with Darabont being fired and the budget being cut, and now I know. Six episodes of searching for a lost girl, dragging storylines and lots of monotonous dialogue.

The show is now pure talk and no action. The whole season stuck in a farm, wtf, join the facebook page: The Walking Dead season 2 sucks

Unfortunately this type of reaction (admittedly from a minority—the show remains incredibly popular) reinforces the reputation of genre fans as anti-intellectual and intolerant of anything that strays outside familar formula. Readers of Black Gate have likely encountered the swords and sorcery fan who claims to love Robert E. Howard’s Conan, except for all the distracting digressions on barbarism vs. civilization, or his Kull stories, except for the boring philosophizing.  We’re now seeing the same type of reaction by zombie fans critical of The Walking Dead. They need more blood, more violence, more action. 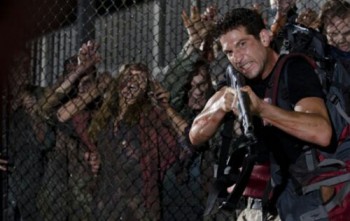 To be honest, I love gore and flesh-munching, too, else I’d be watching Law and Order re-runs or House, but that’s only half of the equation. The Walking Dead is great because it’s a smart show with a lot going on under its bloody surface. Its title could easily pertain to the survivors, who are struggling to maintain their humanity in a world in which animalistic survival threatens to consume basic human decency. Some of the most dangerous critters on the show aren’t the undead, they’re guys like Shane who will do anything to save numero uno.

The show also grapples with deeper issues. For example, when do you draw the line between the life of an individual vs. the survival of the larger group? Which comes first: morality, or survival?

It’s also topical. Take the current Lori and Rick abortion debate, and the difficult choice of bringing an infant into the cruel world. Sure, things are really awful in The Walking Dead, but the same could be said for children in our world brought into crushing poverty and crime, and global warming and suicide bombers. Into a world in which, as a young Carl observes with hard-bitten sobriety, “everything is food for something else.”

The Walking Dead also is applicable to events in our not so recent past. Hershel’s Farm has allusions to slavery—beneath the beautiful, tranquil, well maintained fields is a class of “others” kept locked up in a barn, a source of shame for a Southern gentleman farmer. Yeah, the zombies are cool too, but so is the concept which they may (or may not, depending on your own analysis) represent.

All that said, I don’t think The Walking Dead is perfect. Its most glaring weakness is a too heavy reliance on the old horror trope of smart people doing really dumb things. Like sleeping outside in nylon tents, or failing to institute routine guard duty. Casual strolls into town for supplies, or Darryl riding off on his own to search for a missing girl. The most eye-rolling moment has to be lowering Glenn into a well with a rope to try and haul a zombie out of chest deep water. Sure, it made for some tense moments, but it’s utterly unbelievable—about 1,000 things could go wrong in this scenario (and of course, predictably, one did). Even had Glenn succeeded, the survivors would have had access to well water infected with the oozings of a bloated and rotting undead corpse for weeks. Yeah, dumb decision all around.

But these are minor complaints. As for the criticism that the show is moving too slow, I also disagree. Stuff happens every episode. Carl accidentally shot by Otis. Rick finding out that Lori is pregnant. Zombies in the barn at Hershel’s Farm. Shane offing Otis to save his own ass. Sure, there’s no epic clashes with military forces like you get in World War Z, or Dawn of the Dead-style battles between zombies and biker gangs, but you can get that great stuff elsewhere. I haven’t read The Walking Dead comic series, but from all I’ve heard there’s going to be bloodshed and merciless deaths a-plenty. None of which would have any real impact without us identifying with the characters and developing emotional attachments to them. This is why we’re getting fed the “boring parts.”

The action hounds ought to be careful what they wish for. Sure, you can amp up the action, but as I see it one of two things must result: Either the show will strain credibility with our heroes gunning down hordes of zombies every week, or you’ll quickly lose everyone to infected bites/zombie chow. Either way it doesn’t bode well for the show’s longevity.

In short, the zombie genre is more than gun fights and gore with nu-metal soundtracks blazing away in the background. If you want that, go play Zombie Apocalypse. Watch any of the literally scores, maybe hundreds, of Grade-B, straight to video zombie films. You’ve got multiple Resident Evil installments to choose from. In the meantime, I’ll be enjoying The Walking Dead taking its sweet time telling a great story.

I think you make some valid points here, but characterizing everyone who is critical of the series by calling them mindless gorehound adrenaline junkies just creates a straw man for you to best up. Check out Alex Brown’s weekly discussions over at Tor.com, for example. There are folks discussing the good and the bad of the show, and not just focusing on a lack of headshots.

Fair enough, eruditeogre (love the handle by the way). What I’m really railing against here is a particular line of argument by genre fans and should have been clearer in calling that out. Although I don’t think calling my argument a straw man is fair. I’m not twisting or misrepresenting any of the criticism or propping up a phony argument to beat down; in fact, there is a “I hate the Walking Dead season 2” Facebook page and the comments I’ve quoted are real. I’m just flabbergasted that people find the show boring, considering all that is going on plot-wise and within the social circle of the main characters.

I’ll check the Tor thread and appreciate the heads-up.

I’m with you on this. I could see where some people might consider Season 2 to be slow compared with Season 1, but I’m really enjoying the character development. And as you stated, there’s always something happening. It is currently my favorite show (House ranks second). I think for me, I’d like each season to delve further into what’s going on at a global level. Like when they went to the CDC toward the end of Season 1.