“Golden Pomegranates” was the third installment of Sax Rohmer’s The Si-Fan Mysteries. The story was first published in Collier’s on June 24, 1916 and was later expanded to comprise Chapters 10 – 14 of the third Fu-Manchu novel, The Si-Fan Mysteries first published in 1917 by Cassell in the UK and by McBride & Nast in the US under the variant title, The Hand of Fu Manchu. The US book title marks the first time that the hyphen was dropped from the character’s name, although it was retained within the text.

“Golden Pomegranates” opens with two colorful characters, Meyerstein and Lewison appraising the Si-Fan’s sealed treasure chest in Nayland Smith and Dr. Petrie’s apartment at the New Louvre Hotel. They identify the chest as a rare Tulun-Nur design dating from the sixteenth century or earlier and explain that such chests are secured using a complicated system of knobs being pressed or turned rather than relying upon a traditional lock and key. Smith refuses to allow them to attempt opening the chest and turns down Mr. Meyerstein’s offer to purchase the chest and pay Smith a percentage on its unknown contents. After the appraisers depart, Smith confides in Petrie that he has recently received a premonition not to open the chest. 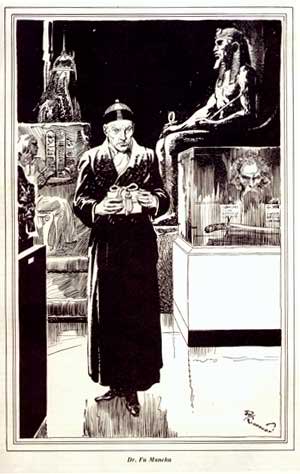 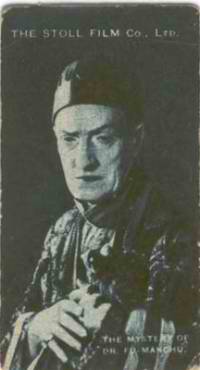 Rohmer is drawing from a real-life Tulun-Nur treasure chest discovered by the Younghusband expedition several years before. Modern readers may be offended by the Semitic stereotyping of the appraisers. Such portrayals were common in fiction of the day. Personally, I have always enjoyed both characters tremendously and wish they had been developed further. The Tulun-Nur treasure chest would also influence Robert E. Howard’s similar deadly chest in The Hour of the Dragon. For his part, Rohmer follows the model of his favorite of Sir Arthur Conan Doyle’s Sherlock Holmes stories, “The Adventure of the Speckled Band” in having Petrie concealed in the otherwise empty apartment with the treasure chest in an attempt to bait a trap for the Si-Fan’s spies in the hotel.

Petrie falls asleep to xenophobic nightmare visions of “yellow faces” and hands appearing in the walls of his room. This is Rohmer mining Yellow Peril fiction for all its worth, but his actual purpose in doing so is a bit of a ruse for Petrie is awakened from his sleep by a seemingly supernatural encounter with a poltergeist. The bed he lies upon quakes inexplicably and a demented, leering ghastly white face appears from beneath the bed and terrorizes him. Petrie calls for help and Smith and Inspector Weymouth (concealed in the next apartment) come to his rescue to discover the poltergeist is in fact an Englishman in disguise. The man dies almost immediately babbling incoherently about “golden pomegranates.” Smith checks on the chest and discovers that the Tulun-Nur box has apparently not been tampered with at all. 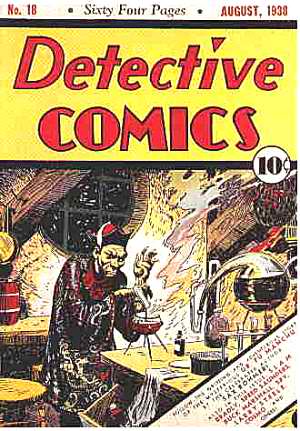 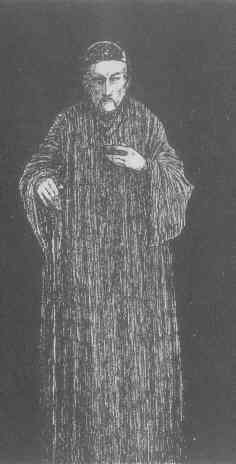 Confirming his suspicions, Smith leads Petrie to the apartment below theirs where they apprehend a young woman in a veil. Smith immediately concludes that she must be an agent of the Si-Fan. In a surprising twist on the formula, Rohmer has the young woman be a simple hotel thief. Her accomplice, the dead man in their apartment, is Lewison the appraiser who was attempting their boldest criminal endeavor yet in the theft of the Tulun-Nur chest. Rohmer clues the story as an expected Yellow Peril thriller, but confounds the reader by delivering a conventional mystery solution to the puzzle.

Back in their apartment with Inspector Weymouth, Smith notes that Lewison’s corpse had swollen fingertips and notes a discoloration stemming from puncture wounds just under his finger nails. Weymouth loans Smith a pair of handcuffs with which he grips the chest to mechanically release the locking mechanism. Once engaged, it releases the support mechanism which appear in the shape of a pair of golden pomegranates. The contents of the chest prove to only be bars of lead for the chest has only been a devious trap to dispose of would-be thieves. Smith and Petrie observe the hypodermic needles triggered by the locking mechanism that have now plunged into the handcuffs. This is the means by which Lewison was killed when he glimpsed the mystifing golden pomegranates.

The story serves to tie up loose ends rather than advance the story arc. The reader eager to learn the fate of Fu-Manchu is forced to wait for the following month’s installment for Rohmer’s purpose here is to tease them with a traditional mystery rather than the Yellow Peril thriller they anticipated. “Golden Pomegranates” stands as a well-written sidestep into conventional mystery, but one that sees Rohmer acquit himself well and prove that he could be equally effective at conventional mysteries as he was with weird thrillers.